I recently finished up a meandering 25-part series about the greatest-ever holy-shit performances ever to shag the stages of the Central Coast. We called it Monterey Rocks. It was subjective, it was ancient history and, in the scheme of things, it didn’t really matter.

But it was fun to research and to write and I hope you enjoyed it.I Iearned things about things I never knew were things. Like the Ducks, the surreptitious Santa Cruz band with a talent lineup featuring Neil Young; the Ducks came and went for 22 memorable shows in 1977. I may have remembered someone telling me something about the Ducks many years ago, but the memory is hazy and I suspect that a lot of people who were privileged enough to see the Ducks back in the day probably can’t remember much about those shows either.

I also learned to be more open-minded about music while writing the series. For instance, there was a time that I actively detested disco, but these days I wouldn’t object if Donna Summer and the Bee Gees played on a loop at my memorial service. I mean, how was it that I never exposed myself to Primus? Why did I adhere to such strident ambivalence toward the Eagles for so long? Those were local shows I missed because of the musical blinders of my youth.

Anyway, my Top 25 list of top performances on the Central Coast took me from Big Sur to Santa Cruz, from the Watsonville High School football field to Soledad Prison. It was quite a trip. As I’ve mentioned, I might have filled the entire Top 25 list with every single performer that showed up at the Monterey Pop Festival (including Janis Joplin twice). But that wouldn’t have been much fun, and I wouldn’t have learned about the Ducks. I wouldn’t have learned about John Lee Hooker playing in the Soledad prison yard. I wouldn’t have known about the time Jane Fonda showed up at The Catalyst in Santa Cruz to rock to The Doobie Brothers during a benefit concert for actor Will Geer, or about the after-party later that night that featured Martha & the Vandellas.

I’ve summarized all my favorite Monterey Rocks stories for the first two episodes of The VOMB Squad. The VOMB Squad is a new podcast that Voices has launched through what we sorta jokingly call the “Voices of Monterey Bay Podcasting Network.” Our podcast will be on all the appropriate platforms just as soon as we jump through the appropriate podcasting hoops. But you can hear my take on the Monterey Rocks series. Listen to the episodes here.

Meanwhile, I asked readers to share their own favorite personal performances. I felt validated that some of their own favorites made my list. I’m not a rock writer or a musician, so there was no expertise or special insider’s mojo that went into my list. I’m just a fan, and I felt validated that so many other fans picked favorites that were on my list.

For instance, Friend of Voices Lane Wallace thought that the Los Lobos concert at the Santa Cruz Fairgrounds was his all-time favorite. I agree with him, since I’m first and foremost an unapologetic Lobos-Head, but I listed that particular performance as No. 5 because I tried to be at least a little objective about my subjectivity.

A couple of other folks said that Crosby, Stills, Nash and Young’s performance at the Esalen Institute, for Joan Baez’s folk festival, was their best-ever rock memory. Or what’s left of their memories. One of them, a fellow who identified himself as “Paul,” said he was too stoned to remember much about that performance, except he did recall “good music.”

Someone else — she identifies as Kat — declared that the Joni Mitchell concert she saw in the area was the best yet. Her explanation: “Duh!” Still others said The Beach Boys, Huey Lewis & and News, Ravi Shankar and the Earthquake Relief Concert in Watsonville featuring Santana — all on my list — were their faves.

Still others came up with unforgettable rock memories of their own. A gentleman named Rich told me that the Three Dog Night concert he saw at the Monterey Fairgrounds in 1975 was his favorite. “It was the mellowest concert crowd I’d ever seen,” he wrote.

Karen, another friend, told me that the Journey show she saw at Sherwood Hall in Salinas in 1978 ranked among her favorite. She recalled that Steve Perry had just joined the band as their new front man. “The soaring and impressive vocals were unexpected,” she said.

By the way, it’s a shame that Sherwood Hall is no longer the vital cultural venue it once was. The place had its heyday, to be sure, featuring acts like Tom Petty & the Heartbreakers, Blue Oyster Cult, Jerry Garcia, Neil Young, Greg Kihn, Joan Jett, The Tubes, Y&T, Ray Charles and Santana. Now it sits empty, mainly.

Finally, Karl Pallastrini picked two favorites, including Joan Baez at Esalen. The other was the late great Larry Hosford, the Salinas kid. And I’m happy that Pallastrini gave us a chance to remember and honor Hosford. Because, hand to God, there needs to be a memorial to that man somewhere in Monterey County. Probably on a street corner in East Salinas.

He was an authentic voice and a trippy soul. Those who really knew Hosford, who died in 2016, still can’t speak of him without getting misty in the ocular regions.

I would bump into Hosford every now and again, but he was usually snarly with me. In his mind I was part of the problem, inasmuch I was affiliated with newspapers and so of course he knew that newspapers are consciously obscuring the truth — the Real Truth — from the unsuspecting masses. Or maybe he just didn’t like the cut of my jib. I don’t know. But, damn, I did admire his ability to write. I freely admit to jealousy in that department. 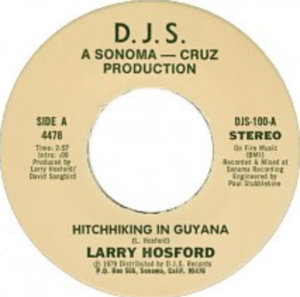 I don’t know of another song in the history of modern music that was as weird and as devastating and as beautiful as “Hitchhiking in Guyana.” I mean, what sort of mind could write those lyrics about that tragedy?

I followed you here Jim like a little lost sheep;
I slept in your tents and I knelt at your feet.
I know that I promised that I’d stay ‘til the end
But your jungle’s too thick and your soup is too thin.

In fact, the most treasured piece of vinyl in my collection is a 45 recording of “Salinas,” the one with “Hitchhiking in Guyana” as the B-side mind-blower. “Salinas” is an East Side anthem, at least among the oldtime Mexicans and Okies who learned to live side by side in The Alisal. Love of the neighborhood and the grudging respect that the neighbors had for one another — he referred to his neighbors as “Alisal soul” — is what we now call Alisal Pride.

Take a look at this incredible video of a live Hosford performance of “Salinas.” While you’re listening, check out the comment from Charlie Wallace, the fan who posted the video. Specifically, Wallace has a spot-on perspective about Hosford’s relationship with Salinas. Like Steinbeck before him, the Respectable Movers and Shakers of Salinas pretty much ignored Hosford. He apparently wasn’t a Chamber of Commerce type of guy, which is to say that he’s more like the type of guy you’d prefer to know. Which is why I appreciate Wallace’s observation:

“Can you believe the folks at the Salinas Rodeo didn’t use this song for the Rodeo but instead hired someone NOT from Salinas to write a song about Salinas? Go figure.”

“Salinas” and “Guyana” are only two examples of Hosford’s incredible talent. In my opinion, he deserves to be honored for being an honest example of what it means to be from Salinas.

In fact, forget the street-corner memorial. A better tribute would name the auditorium at Jesse G. Sanchez Elementary School in his honor. We’re talking Okies and Mexicans in Salinas, after all, and it doesn’t get much better than Hosford and Jesse Sanchez.

So, thank you, Karl Pallastrini, for giving me a chance to remember Larry Hosford.