One of the coolest performances ever staged on the Central Coast happened on a warm summer afternoon in a prison yard, inside what is now known as the Correction Training Facility at Soledad.

It was June 11, 1972, and John Lee Hooker had developed a deserving reputation as the consummate bluesman. He was the King of the Boogie, the son of Mississippi sharecroppers who rose to fame with his electric adaptation of Delta blues. Hooker had been singing the blues since the early 40s, but his career gained traction when he was “discovered” by English rock bands that emulated his style and played his music. He teamed up with Canned Heat for the seminal album “Hooker ‘n’ Heat” in 1970.

And in 1972, a promoter at Hooker’s label, ABC Records, convinced him to show up for a concert date at Soledad prison — and to record the proceedings for a live album. He had been known to pop in around Central Coast clubs over the years; promoter Steve Vagnini, the Monterey County Assessor, said he remembers Hooker showing up at his front door early one morning after a show in search of something that he had lost. And while he was a Mississippi native who cut his teeth in Detroit, Hooker ultimately settled in Northern California.

Hooker wasn’t the first to play a California prison. Johnny Cash famously did Folsom Prison in 1968. Three years earlier, Frank Sinatra and Count Basie entertained the inmates at San Quentin Prison. But until John Lee showed up, no one of note had performed at Soledad. (Ten years later, reggae superstars Black Uhuru did a show at Soledad that included songs like “Sensimilla.”)

Hooker’s son, John Lee Hooker Jr. was 20 at the time his dad was booked to play at Soledad. The kid had just been released from a prison in Michigan; John Lee Jr. remembers that his father brought him to California “to get that boy out of Detroit.” A musician in his own right, Junior was performing on local radio at the age of 8. But drugs — hard drugs — took hold and the legend’s son was in and out of prison for decades. It was a big deal that John Lee Hooker Jr. would join his father at the Soledad prison gig.

“It was just me leaving one yard and moving to another yard,” John Lee Jr. told Voices of Monterey Bay. “The only difference was I was free and I was able to walk out of the yard.”

Not only did John Lee Jr. join the band, but his father thrust him front and center. The first thing a listener hears on the resulting album, “Live at Soledad Prison,” is Junior introducing himself and the band. And John Lee Jr. stormed through the first two songs, “Superlover” and “I’m Your Crosscut Saw,” while his father stood offstage.

“This was Soledad Prison! The place was infamous,” John Lee Jr. said during a telephone interview. Sirhan Sirhan, Robert F. Kennedy’s assassin, was inside there somewhere. So were George Jackson and the other Soledad Brothers.

"It was just me leaving one yard and moving to another yard. The only difference was I was free..." John Lee Hooker Jr.

At the end of “Crosscut Saw,” John Lee Jr. expressed his appreciation to his captive audience: “I had a ball, fellas,” he said. “I came all the way from Detroit Motor City just to boogie with you cats.” And then he brought his Old Man to the stage.

The band burned through five more songs before the sound cut out abruptly in the middle of a sizzling version of Hooker’s “Bang Bang Bang Bang.” John Lee Jr. said he can’t recall why the sound went out. Maybe it was a tripped breaker. Maybe someone pulled the plug because it was time for prison count. Or maybe it was the lyrics: Bang-bang-bang-bang / You shot me right down…” In any case, John Lee Jr. remembered that the show “was as professional as it could be in a prison in 1972.”

There’s an old fuzzy photograph of John Lee Hooker Jr. on stage that day. He’s belting the blues into a microphone, the band behind him, a prison guard offstage to the right.

John Lee Jr. never saw the photograph until about a dozen years later, when he returned to Soledad prison, this time as a convicted felon to serve time, unable to walk out of the yard. He was there on a drug-related charge. (“It was always drug-related,” he said.) Before he was hauled off to transfer from a local jail to Soledad, John Lee Jr. had a jailhouse conversion, turning his life over to Christ. By then he’d been in and out of God knows how many prisons.

During his interview with Voices of Monterey Bay, he was having a difficult time keeping count of the walls he’d seen over the years. There’s been at least 10, eleven if you count the one in Canada. At Soledad prison, fresh from his jailhouse conversion, he became the yard preacher, delivering testimony and reading the Holy Bible to anyone who might listen.

He also worked on the landscape crew at Soledad. His crew supervisor was a correctional officer named Ernie. Ernie told him he was there that day in Soledad, guarding the stage. Before John Lee Jr. was paroled from Soledad, Ernie gave him a copy of the photograph. Ernie was the correctional officer, offstage and to the right in the picture. John Lee Jr. still has the photograph, framed and on display in his Roseville home.

Meanwhile, the preacher’s father enjoyed the fruits of blues’ superstardom. He was memorably featured in “The Blues Brothers,” with John Belushi and Dan Akroyd in 1980. In 1991, he was inducted into the Rock and Roll Hall of Fame and his star can be found on the Hollywood Walk of Fame. He died in 2001, at the age of 81, a week after performing before a packed house at the Luther Burbank Center for the Arts in Santa Rosa.

John Lee Jr. eventually got clean for good. He is the Rev. John Lee Hooker now. He still spends a lot of time in prison — Pelican Bay and Vacaville — but now as the prison chaplain. He’s 67 years old and he is at peace. He recently got married (the Voices interview had to wait until the honeymoon was over). He has graduated from a clinical pastoral education program and is working on his master’s degree in ministry. “It’s my passion,” he said. Visit his website and the introduction describes the site and his life this way: “From the Blues to the Good News.” 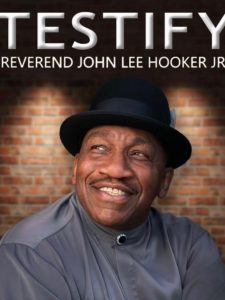 He said he also started ministering to inmates at Soledad prison a couple of weeks ago. He’s seriously considering the offer. John Lee said he can’t help but think he’s gone full circle at Soledad. First recorded there with his father, he then became a prisoner there, and now he returns as a Chaplain.

Through it all, he never lost his passion for blues music. Even while incarcerated, he kept playing, forming his own prison bands. He’s been writing gospel songs, touring the world with his band and cutting albums. He’s recorded six albums, so far. “Seven, if you count Soledad,” he said.

And he still recalls what he calls the “notorious” show he did with his Old Man at the “infamous” Soledad prison. He held his own in there, even when, after the show, one of the older guys in the audience tried to lure him into committing some nonsense on the outside. But the main thing was the idea that he and his father had lightened the day for inmates.

“It was something special to make them smile,” he said. “That’s what they told us afterwards. They told us, ‘You made our day.’”

Take our survey. Tell us your favorite Monterey Bay performance: