From ‘Celebration of Big Sur’ poster

And we’ve got to get ourselves back to the garden.

Fifty years ago this week. September of 1969. It was two years after the Summer of Love, the era that was supposed to change everything, and the peace-love-dope idyll was showing a bit of fray around the edges. The Manson murders were still fresh in the collective memory. The Kennedy family was embroiled in an unseemly death at Chappaquiddick. The President of the United States was known as “Tricky Dick.” The Beatles were breaking up. But deep in the wilds of Big Sur, Joni Mitchell and Crosby, Stills, Nash & Young were keeping the flame lit at Joan Baez’s party at the Esalen Institute.

Baez had been headlining the Big Sur Folk Festival for five years, and her show had attracted artists like Judy Collins, Al Kooper and Arlo Guthrie. They had been groovy, low-key affairs, the sort of events that secured Esalen’s reputation as the wellspring for the Human Potential Movement in subsequent decades.

Joni Mitchell showed up in Big Sur on Sept. 14 and 15. Fifty years ago. She brought with her Graham Nash, her lover at the time, and the rest of the CSNY crew. Together with John Sebastian, they sang “Get Together,” a ‘60s anthem written by Chester Powers that became a huge hit for The Youngbloods two years earlier. If you missed out on the hippie vibe, be sure to view the video from that magical Big Sur moment.

More significantly during her appearance in Big Sur, Mitchell unveiled “Woodstock,” the lyrical and haunting account of the music festival in Upper New York state. Woodstock had happened only a month earlier. Mitchell wasn’t actually there; her agent worried that she’d miss a scheduled appearance on the Dick Cavett Show if she went to upstate New York. But she wrote the song based on what she had seen of Woodstock on TV and what Nash had told her about the experience.

Mitchell, a Canadian, started playing clubs around Saskatoon in 1962. The next year she played miscellaneous ski clubs and was even a one-time replacement for a late-night moose-hunting show in Prince Albert, during which she was interviewed and performed several songs with her ukulele. She and her first husband, Chuck Mitchell, toured the United States and Canada for the next couple of years until their divorce in 1968.

By then Joni Mitchell had been appearing regularly on Canadian television and getting invited to more substantial gigs. In 1967, she appeared at the Newport Folk Festival for a songwriters’ workshop with Leonard Cohen, Judy Collins, Janis Ian and Tom Paxton. Her first album, “Song to a Seagull,” introduced her deep rich vocals to the world. And her next album, “Clouds,” featured her first big hit, “Both Sides, Now.” (She has released 34 albums during her career.) She first showed up to Big Sur in 1968, emerging from the back of a Volkswagen van to make a surprise appearance at the folk festival, joining Mimi Farina for a tribute to the late Richard Farina, and Mama Cass did a couple of duets with her.

And by the time she hit Big Sur in 1969, she was immersed in the Laurel Canyon scene in Los Angeles, where a new brew of California music was steeped among neighbors that included The Mamas and the Papas, Carole King and the Eagles. Rock journalist John Carpenter of the Los Angeles Free Press noted that Mitchell was not on the Big Sur Folk Festival program that year — and neither were Crosby, Stills, Nash & Young. But they were welcomed to the stage and they blew away the audience. Carpenter, who covered the festival, reported that Mitchell’s voice “carried out over the Esalen grounds, over the ocean fitting the setting and sounding better than I have ever heard her.”

Mitchell’s “Woodstock” was included on her third album, “Ladies of the Canyon,” in March 1970. And though it has become regarded as the hippie anthem, it was a B-side track for the album’s hit single, “Big Yellow Taxi,” the early environmentalist anthem.

Meanwhile, the set-up at the Big Sur Festival was always a bit weird; musicians stationed themselves on one side of the Esalen swimming pool, with the pool serving as a sort of moat between attendees and performers. Music fans who couldn’t afford the $4 entry fee lined the cliffs above Esalen to groove to the sounds and efforts to sneak in through the wilderness were thwarted by what an embittered rock writer would call “Esalen robots.” The writer, Rhymer McClure of San Francisco Good Times, exhausted his review of his weekend with Joni and CSNY and Baez by harping entirely on his unpleasant encounters with the “creeps” at Esalen.

Nevertheless, the performers at the two-day festival donated their time, and the money raised benefited Baez’ Institute for the Study of Non-Violence in Carmel Valley.

Kira Godbe, a photographer from Monterey County, had been in Los Angeles shooting album covers with Tom Gundelfinger O’Neal when she followed Crosby, Stills and Nash, one of the groups they were working with, to Big Sur. “It was a pleasure to return to my childhood stomping grounds to see all these great performers on the pool deck, overlooking the Pacific,” she remembered.

The weekend festival, including the CSNY-Mitchell collaboration and the premiere public performance of “Woodstock,” is memorialized in a documentary called “Celebration at Big Sur.”

The film is shot clumsily, but it’s a groovy depiction of the era. BuzzFeed, the online magazine, voted Neil Young’s “Down by the River” performance at Big Sur as Young’s single greatest performance ever. If nothing else, the video of that performance is fun if only to watch Joan Baez rocking out in full jitter dance. But, of course, Neil Young is famously crotchety about video depictions of his live performances, so BuzzFeed’s YouTube link to that particular song is “unavailable.” (You can find it elsewhere. You’re on your own, though; the last thing Voices of Monterey Bay needs is a cease-and-desist letter from Neil Young’s attorney.)

Perhaps the most memorable scene from the movie comes after a rocking rendition of “Sea of Madness,” when Stephen Stills trades blows with an angry heckler. The interloper, a bearded gentleman with the mien of a raving maniac, crossed onto the flat in-between that separated audience from performers near the pool, and shouted at the audience while gesturing at the band. Witnesses say he was apparently indicting CSNY of the high crime of “selling out to the man” for money, a serious charge at a time when musicians of a certain stripe bristled at the notion of “commercialism.” (Imagine that!) Stills, who was dressed in a thick and cumbersome fur coat that seemed to limit his locomotion, tried to talk the guy down from his trip, but things escalated as these things tend to do, and what followed was much pushing and shoving until someone tried to break up the fight and was rewarded for his effort by taking a shot to the back of the head. Things settled down after that. But what a bummer, man. 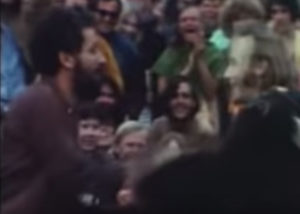 In his book, “Wild Tales, a Rock & Roll Life,” Nash recalls that one of his favorite David Crosby moments resulted from that Big Sur fight. According to Nash, Crosby was heard to holler over the proceedings: “Peace and love. Kick his ass!”

Stills later sounded chastened. “When somebody gets up and freaks out like that, it kind of strikes a nerve,” he told the crowd. “And you end up back in the middle of that old trap. And where that guy is at is in that same trap, and it’s getting mad about something.” Stills said he was lucky that people “loved him out” of the skirmish. “We all just gotta let it all be,” he said, “‘cuz it’s all gonna be how it’s gonna.” He then launched into a solo rendition of “4 +20.”

It was obviously bad form, baring fists at a low-buzz folk festival in Esalen. Which begs the question: Has there been a fistfight at Esalen — or at least a bit of unpleasantness that didn’t involve scream therapy — since then? If so, we’d love to hear that story.

Fifty years later, if we are to believe Rhymer McClure, that malcontent writer from Los Angeles, it wasn’t the only time a bit of violence crept into the righteous vibe at the festival. McClure wrote that he witnessed the security “robots” at Esalen apprehend a guy who was trying to sneak in. “The robots grabbed him, threw him to the ground and kicked the shit out of him,” he wrote. “That, I guess, is how Esalen feels poor people should be dealt with — remember, Esalen Institute, Reservations Only.” But then, McClure may be have been harboring sour grapes and his recall of events might have been tainted by the fact that he was eventually kicked out of the festival because he didn’t have credentials.

Perhaps the violence and the bad PR for Esalen is why Baez ended up booking the 1970 Big Sur Folk Festival at the Monterey Fairgrounds. Also, Crosby, Stills, Nash & Young weren’t invited back. But the Beach Boys was on the lineup in 1970, as was Linda Ronstadt and Country Joe McDonald.

14 thoughts on “Joni, Joan and a bummer scene at Big Sur Monterey Rocks #18”