When there’s so much money flying around in politics, some of it is bound to filter through to campaigns with absolutely no competition.

That might best explain how Rep. Jimmy Panetta’s campaign managed to collect more than $1.2 million last year even when his challenger was pretty much a political nonentity. (Pop quiz: Who was Panetta’s challenger last year? Chances are you won’t be able to answer without a Google search.)

Panetta whistled past his competition in the 2018 election, defeating an independent from the Monterey Peninsula (his name is Ronald Paul Kabat, by the way) by a 4-to-1 margin.

It’s safe to say that the outcome was a foregone conclusion. On the Central Coast, Jimmy Panetta is a favorite son, the son of a favorite son, the heir to Leon Panetta and the heir apparent to represent a region once represented by his father. If it’s possible for someone to grab a brass ring with his silver spoon, Jimmy Panetta is that guy. When Jimmy Panetta, then a deputy district attorney, threw his hat in the ring for the 20th Congressional District to replace retiring Rep. Sam Farr three years ago, a withering cast of other potential Democrats in the region bowed out to make way, like amiable spirits.

The Panetta money might sound like a lot for a race that was a solid cinch for the Democrat. But consider that candidates in the Senate and House elections last year spent in excess of $5.7 billion on their campaigns.

Even with the shoe-in certainty of the election, Panetta still generated campaign contributions totaling more than $1.2 million last year, according to a recent report issued by OpenSecrets.org, the publishing arm of the Center for Responsive Politics in Washington, D.C. The nonprofit center’s mission is to track money in federal elections. His opponent (the parenthetical Mr. Kabat) generated so little financial support that his contributions and spending don’t even register with OpenSecrets.org.

The Panetta money might sound like a lot for a race that was a solid cinch for the Democrat. But consider that candidates in the Senate and House elections last year spent in excess of $5.7 billion on their campaigns. It was the most expensive midterm election in history, according to OpenSecrets.org.

The midterms “saw greater spending than we’ve ever seen or anticipated for a midterm elections, capitalizing on years of loosened campaign finance regulation and oversight,” said Sheila Krumholz, the center’s executive director.

While Panetta was able to attract $1.2 million in contributions during a campaign cycle that was clearly a cakewalk, he only spent $716,122, according to OpenSecrets. During the 2017-18 election cycle, the Center for Responsive Politics recorded that Panetta’s campaign received $723,415 in political action committee money. Of that, about $568,000 came from business PACs, while labor interests chipped in about $92,250.

That’s only a small percentage of what Democrats raised last year to take back the House. OpenSecrets.org reported that Democratic candidates for all the House seats collected $932.5 million last year, outgathering Republicans by a whopping $300 million. With that much money floating around, it’s no wonder that at least some of the crumbs filtered down to Panetta. 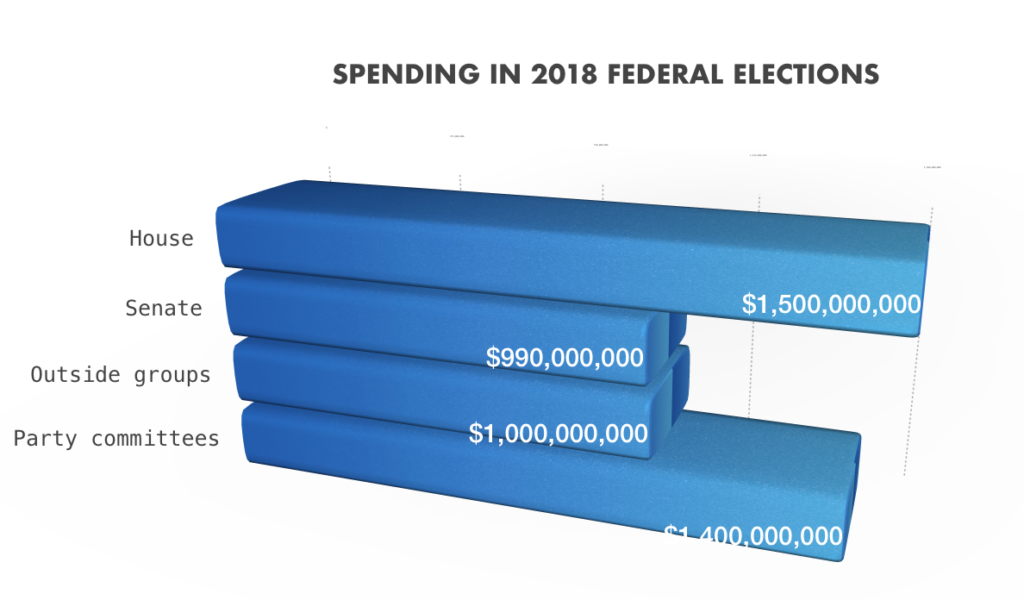 That spending paled in comparison to the money that was being thrown around the dogfight in the adjoining 10th Congressional District, where incumbent Jeff Denham, the Republican, couldn’t fight off a challenge by newcomer Josh Harder. Harder was among more than a dozen Democrats in California who managed to upset incumbent Republican congressional representatives in hard-core Republican districts in 2018, helping to turn the House blue in what analysts call a voter rebuke of the Trump administration.

Candidates in the Harder-Denham race spent more than $13 million. Harder collected and spent about $8.3 million.

And Panetta’s campaign war chest didn’t even come close to what Anna Caballero and Rob Poythress spent in the contentious race for the 12th California Senate District. That election was for a statehouse position, and it generated more than $7 million in contributions and spending last year, according to reports submitted to the California Secretary of State. (OpenSecrets.org only tracks campaign spending for federal offices.) Caballero, a former Salinas mayor, eventually defeated Poythress, the former mayor of Madera and a Republican.

In its reports, OpenSecrets.org drills down to provide hard-number analysis of the types of contributions politicians receive. For instance, its report showed that Panetta received $184,942 last year from agribusiness, by far the largest “sector,” followed by $86,500 from the finance/insurance/real estate sector.

His most generous donor was Northrop Grumman, which gave Panetta $14,500 last year. Northrop Grumman is among the largest defense contractors in the world, specializing in aerospace systems, ship building and technical services. Last year it directed more than $3.3 million to candidates, and another $2.2 million to political action committees and national political parties.

Two years ago, when Panetta was first elected to Congress, he spent little more than $1 million to defeat Casey Lucius, a Pacific Grove city councilwoman who staged a feisty campaign and who raised more than $420,000.

On the off chance that a strong candidate with lots of money challenges Panetta in 2020, the latest reporting documents show that his campaign has almost $760,000 in the bank.

One thought on “Cash on hand Jimmy Panetta rakes it in, even when reelection is a sure thing”