Questions to Schneider about two $750 payments from the Davis council campaign in early 2017 sparked loud and angry denials and denunciations from Schneider on Friday. The disputed payments also added fuel to a continuing controversy over allegations that Davis may have improperly funneled $31,000 from his union’s treasury to Schneider as part of the current campaign for sheriff. (Here’s another good backgrounder.)

Davis, a sheriff’s deputy, is campaigning against the incumbent, Steve Bernal, in the June election. He is a former president of the deputies’ union, the Monterey County Deputy Sheriffs Association, which has endorsed him over Bernal.

Schneider declined to discuss specifics Friday, deciding instead to launch into the type of rant he has aimed at several journalists since becoming active in local campaigns. While helping to run Bernal’s first campaign four years ago, he accused the local press corps of bias against Bernal and worse. Now he accuses the same journalists of bias against Davis.

“Are you a fucking moron?” Schneider asked this writer in one of several telephone conversations Friday. “Do you not 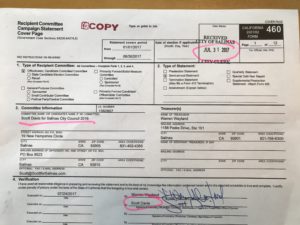 know how to read a goddamned 460 (campaign disclosure form)?”

In a subsequent email, Schneider wrote “(D)id not work on Scott’s campaign for city council. Nor will I respond to a reporter any longer who disparages me, refuses to print my points, and misrepresents information any longer.”

Despite Schneider’s denials, Davis’s official campaign finance report filed with the Salinas City Clerk’s Office on July 31, 2017, indicates that Schneider was paid $750 on two occasions in the reporting period of Jan. 1, 2017, to June 30, 2017. The document was signed by Davis and his campaign treasurer at the time, accountant and longtime GOP activist Warren Wayland. Campaign treasurers are required to maintain invoices and explanations for campaign expenditures but Wayland, now semi-retired, did not return calls Friday or Saturday. 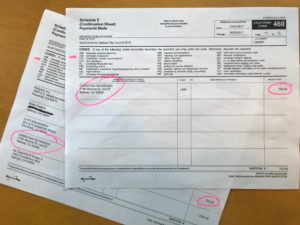 The report from Davis’s council campaign says Schneider was paid for work as a campaign consultant. No other details are provided except Schneider’s address at the time. He has since moved.

In a brief telephone interview Friday, Davis initially denied using Schneider for any work related to the council campaign but when told of the amounts he said he might have hired Schneider to perform some data analysis. A subsequent message suggesting he track down any invoices was not returned.

“I don’t like the guy,” Fickas said. “He’s why I’m not working for Davis in this campaign but for the other guy.”

However, after conferring with another Davis campaign consultant, Brian Higgins,  Fickas said he was mistaken and had not worked with Schneider on the council campaign.

Higgins, who was in charge of the council campaign, said he never worked with Schneider on the campaign but said it was possible the campaign hired Schneider to do some work after the election. Davis won his current council seat in November 2016 but the campaign expense report covers contributions and expenditures made in the eight months following the actual vote.

One likely scenario is that Schneider did not work for the Davis council campaign but was paid from that campaign treasury for work he was doing to set up Davis’s sheriff’s campaign. The $750 payments to Schneider were reported to have been made in the reporting period ending June 30, 2017. Less than two months later, Davis filed forms announcing his intent to run for sheriff, forms prepared for him by a Long Beach election finance specialist hired by Schneider.

If what the former members say is true, the payments would likely amount to something far more serious than campaign reporting violations.

The Deputy Sheriffs Association contributed $5,500 to the Davis council campaign so its membership may unknowingly have started paying for his sheriff’s campaign before it had officially begun.

The $750 payments would seem to be a minor issue on their own but they and Schneider’s outsized reaction add intrigue to the allegations that he had received some $31,000 in under the table payments from the Deputy Sheriffs Association, the union that represents sheriff’s deputies. Davis has been president of the association on and off for several years and has been one of its most active members. At one point, his domestic partner was treasurer of the association’s political action committee despite not being an association member.

The allegations about the $31,000 came from association members who were voted out of the organization after raising questions about the expenditures earlier this year. They alleged in a news conference and in a complaint to the state that the association had funneled some $31,000 to Davis’s campaign for sheriff starting in May 2017 without the knowledge or consent of the bulk of the union membership, most of its leadership and even its most recent treasurer.

If what the former members say is true, the payments would likely amount to something far more serious than campaign reporting violations. Sheriff’s Cmdr. Joe Moses, spokesman for the group making the accusations, contends the transactions could amount to embezzlement or money laundering.  It would not be the first time the union had engaged in money laundering. During the campaign over fracking in Monterey County a year ago, the union’s political action committee accepted $20,000 from Chevron and passed it through to various political campaigns supporting Chevron’s position.

(The union and Schneider have declined to discuss specifics about the allegations but have argued in interviews and court papers that state law made it illegal for Moses and others to make such allegations public because it violates the privacy rights of people in law enforcement.)

Referring to the $31,000, Schneider has said more than once in recent weeks, “The money couldn’t be for the campaign because there wasn’t even a campaign committee yet.” That may have been so when the payments began but they continued in installments well after the committee was formed.

Also of note, although city council races and sheriff’s races are considered non-partisan, Davis has aggressively injected partisanship into the sheriff’s race, declaring himself a Democrat on his literature and campaign signs. Schneider specializes in representing Democrats although he did work four years ago for Bernal, a registered Republican who has become active in GOP politics.

During the 2014 Salinas City Council race, however, Davis surrounded himself with Republicans. Campaign consultants Higgins and Fickas generally work for Republicans, and the campaign treasurer, Warren Wayland, frequently volunteers his accounting skills on behalf of GOP candidates.

In the council race, Davis ran against longtime Salinas activist Brian Contreras, who had a strong claim on the Democratic vote. So Davis veered right, attracting considerable support from the business community.

For the sheriff’s race, Davis has veered left, painting himself as a progressive on immigration issues.  Schneider said the campaign strategy revolves around taking advantage of Monterey County’s strong Democratic majority.