The watchdog agency tasked with monitoring campaign finance law in California opened an investigation into allegations that the Monterey County deputy sheriff’s union laundered money into the campaign of Scott Davis, a deputy and Salinas City Councilman running for sheriff, by using union dues to pay Davis’s campaign advisor.

“However, please be advised that at this time we have not made any determination about the validity of the allegations you have made or about the culpability, if any, of the person(s) you identify in your complaint,” West writes. The email also states that Warren won’t receive further notification from the FPPC until final completion of the complaint. 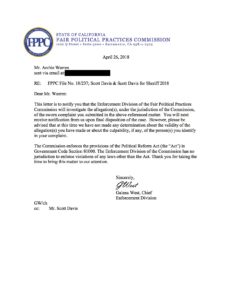 The announcement caps a lunatic week in Monterey County politics, one in which a group of commanders recently ousted from that union, the Deputy Sheriffs Association, released copies of checks they claim show Davis and union President Dan Mitchell used union funds to pay Pivotal Campaign Services, the agency run by Davis’ advisor, Christian Schneider.

Davis is seeking to unseat Sheriff Steve Bernal in the June election.

The commanders say Davis’ signature is on the checks, despite the fact that Davis is no longer on the union board and no longer has check-signing privileges. Mitchell has maintained that Schneider, who has received just over $31,000 from the DSA, was hired to do long-range planning. 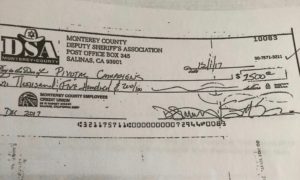 Scott Davis says the signature is a forgery.

Davis, though, told a group of reporters who assembled for a press conference yesterday outside the DSA office in Oldtown Salinas that the signatures were not his. He walked up to the DSA office just before the press conference and was present for its entirety; KSBW reporter Bianca Beltran asked him to provide her with a signature for comparison’s sake. According to Beltran, he declined.

“I’ve never seen those before in my life,” he said when shown the checks. When Beltran asked if it looked like a forged signature, Davis said, “It’s not mine … it’s total nonsense, total nonsense.”

In all, the checks provided at the conference amount to $13,250. 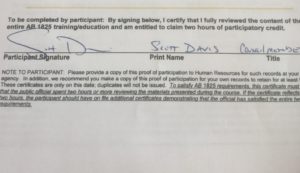 Davis says this is his real signature.

In the complaint filed with the FPPC, Warren writes that Davis, who was previously the union’s president before Mitchell took over, has a strong connection to Mitchell and that Mitchell has “full control of the DSA bank funds and is aggressively backing Davis for Sheriff.” The payments to Schneider, he writes, were made under the pretext of Schneider providing long-term planning to the DSA.

“No evidence has been shown other than a one-page invoice from Schneider for consulting. During our quarterly meeting in March 2018, the DSA executive board treasurer (Ted) Avery, when asked, did not know who Christian Schneider was,” Warren writes. “It is clear NO information regarding payments to Schneider or Pivotal Campaign Services was processed through the Treasurer, which should not be occurring and is in direct violation of the DSA bylaws.”Warren also alleges that Davis’ signature on the checks ties him to the transactions and “show collusion where an agreement was made to deceive and defraud the DSA members involving not only money laundering, but embezzlement, grand theft and conspiracy.”

Adding to the lunacy, Mitchell and DSA treasurer Avery last week sued Bernal and the county, claiming they have been harassed and intimidated after the union membership voted last month to oust a group of commanders known as the DSA’s “C-Unit.”