Royal Calkins accepts his honor at the SPJ event on Nov. 30

Calkins formally received his award from the Northern California chapter of the Society of Professional Journalists on Nov. 30, and Voices will celebrate with an exclusive celebratory dinner provided by legendary Carmel Valley chef Michael Jones early next year.

Calkins has been honored with the SPJ award after a career spanning more than 40 years in California. He was an editor and investigative reporter for the Fresno Bee from 1980 to 1999. At the Bee he won a national prize for an early report on head injuries among football players, and was a finalist for a Pulitzer as part of the staff reportage on the Coalinga earthquake. He worked at the Santa Cruz Sentinel and The Monterey County Herald, and blogged at his own Monterey Bay Partisan before writing for Voices of Monterey Bay.

“He is a champion of overlooked people, a challenger to corrupt power and a mentor to journalists wherever he goes,” according to a press release from SPJ announcing its 2022 awards.

To celebrate the honor, Voices of Monterey Bay will host an event we call A Royal Feast, as a fundraiser for Voices, the only nonprofit, bilingual news operation on the Central Coast.

With a dinner prepared by Jones, wine by Carmel Valley vintners and conversations with Royal in a gorgeous setting, A Royal Feast promises to be a fun-filled gala.

Proceeds from the event will benefit Voices of Monterey Bay. Donors who donate at least $500 during VOMB’s end-of-the-year NewsMatch campaign will receive a special invitation to A Royal Feast. Contributors of $750 will receive invitations for two people, and $1,000 gets you three seats at the table.

Every donation Voices receives through December 31 is matched, dollar for dollar, by national foundations that support free and independent journalism.

The VOMB Squad looks forward to A Royal Feast because we enjoy a good party, because we love Royal and because Michael Jones is a uniquely lovable character. And because this is a VOMB Squad production, surprises are likely.

Attendance will be limited to the first fifteen donors. The date for A Royal Feast has not been determined but will be set early next year, for a time to accommodate attendees.

Meanwhile, Calkins said he was honored to be honored with the lifetime achievement award. “I could not have been more surprised when I learned of this award,” Calkins said. He was nominated by the co-editors at Voices of Monterey Bay, and he will formally accept the prize on Nov. 30.

Calkins recapped his storied journey through journalism this way:

“I’ve had a career filled with interesting and mostly nice people, spectacular events, tremendous variety, generous mentors and nearly adequate compensation. I learned a little about everything and more than I ever wanted to know about public corruption, waste disposal, the city of Carmel, sociopaths, bad cops and crooked bankers. I mourned with more new widows than I can remember. I got to ride in helicopters. And now I get an award for all that. Pretty cool.”

A Royal Feast promises to be great fun. Michael Jones is a renowned local chef known for his quiet philanthropy, his not-so-quiet progressive attitudes,  and his creative touch in the kitchen. He currently runs A Moveable Feast out of the Massa Estate Organic Vineyards in Carmel Valley.

Donations to Voices through NewsMatch are tax deductible. All individual donations of up to $1,000 will be leveraged with matching grants offered by foundations like the Ridder Foundation and the Democracy Fund.

To secure your seat at the table for A Royal Feast, please use our handy contribution platform here or click the graphic below. Supporters may also send checks (made out to the “Institute for Nonprofit News”) to P.O. Box 547, Salinas 93902.

NOTE: Supporters of Voices of Monterey Bay who have already contributed less than $500 during our NewsMatch campaign may donate the balance by Dec. 31 to receive an invitation to A Royal Feast. For more information, contact Joe Livernois at joe@voicesofmontereybay.org 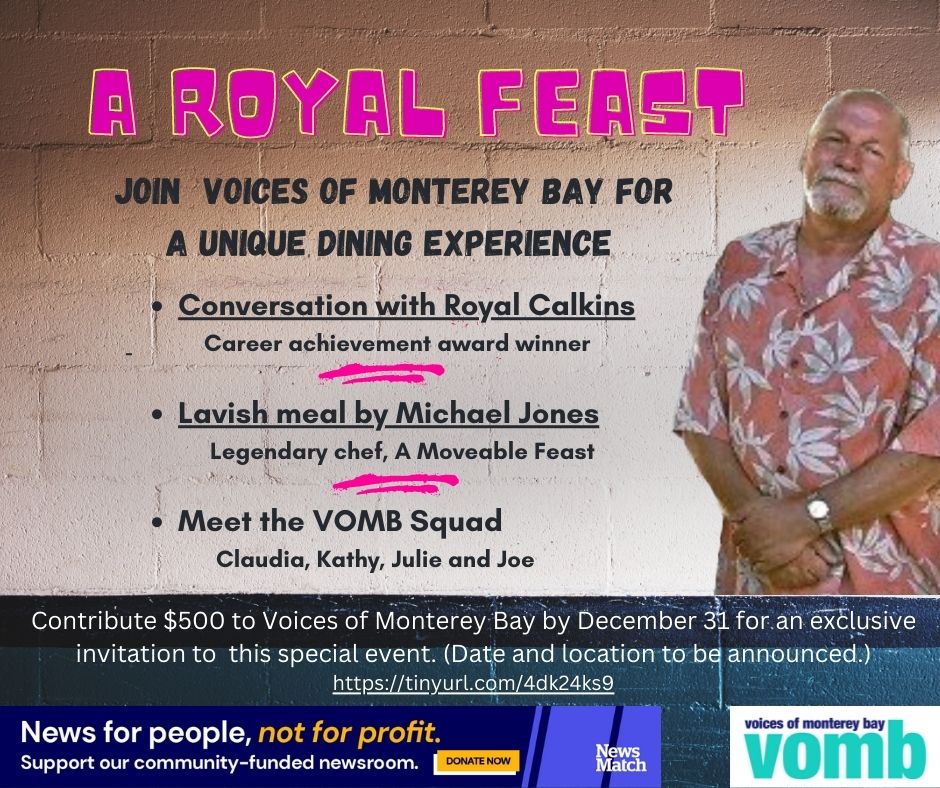