Monterey County voters interested in law enforcement, government and the kind of problems caused by empowering the wrong people might want to pay close attention to a November ballot measure in Los Angeles County.

The proposed charter amendment would enable the Los Angeles County Board of Supervisors to remove the sheriff there for cause on a 4-1 vote. After spending much of the past couple of years reporting on the shortcomings of the Monterey County Sheriff’s Office, I think it is an absolutely grand idea that needs to spread.

Unfortunately, Monterey County is not a charter county like Los Angeles County and 12 others in California. As a general law county, it would need to find a different mechanism in order for the Board of Supervisors to get some supervisory authority over the sheriff. But, as they say, if there’s a will, there may be a way.

The whole concept of elected county sheriffs is outdated even though some cowboy-hatted sheriffs have begun arguing that their reading of the Constitution puts them atop the law enforcement hierarchy in their counties no matter what the attorney general thinks. The amount of power this system bestows on people, qualified or not, is scary and getting scarier. Watch for some “constitutional” sheriffs across the land to insinuate themselves into the 2022 vote count that a clot of misguided GOPers hopes to manipulate.

Much more has been written about the rogue sheriff of Los Angeles County, Alex Villanueva, than the unqualified sheriff of Monterey County, Steve Bernal. That’s partly because of solid and aggressive reporting by the Los Angeles Times and because Villanueva’s abuses have been so blatant. Despite piles of evidence contradicting him, he is adamant that there aren’t gangs of deputies carrying out dirty agendas in his department. He lets his wife make decisions on promotions and just this month he served questionable search warrants on some of his key critics. California Attorney General Rob Bonta has since excused Villaneuva’s office from the investigation.

Bernal’s two terms in office have been quieter, partly because other media outlets haven’t expended much energy covering him and because of the nature of the biggest issue in his department — sexual harassment.

Allegations of sexual harassment are difficult for the media to cover because identities of the victims are generally confidential and, locally, because Monterey County regulations keep the results of sexual harassment investigations confidential. And while the Board of Supervisors can take action against most county employees found to have engaged in harassment or various forms of discrimination, the board has no power to discipline anyone in the Sheriff’s Office because the sheriff is an elected position. 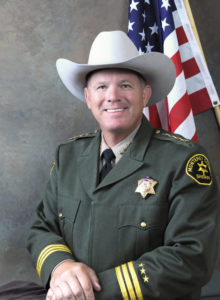 That was demonstrated dramatically earlier this month when the Monterey County Weekly reported on harassment complaints that were ruled substantiated but that didn’t result in any apparent discipline. Earlier this year, the county civil rights office determined that now-retired Undersheriff John Mineau had harassed two women in the department and that his replacement as undersheriff, John Thornburg, had failed to act on the credible complaints of harassment, complaints by two women with decades of experience in the department.

One of the women told investigators that Mineau repeatedly pressured her to have a sexual relationship. Mineau has declined to comment publicly on the allegations.

Bernal promoted Thornburg despite the findings of the county investigation. That prompted Capt. Joe Moses, currently a candidate for sheriff, to break with Bernal and proclaim that he would have disciplined Thornburg instead of promoting him. Bernal reacted by pulling his endorsement of Moses in his race against Marina Police Chief Tina Nieto.

A measure such as the one in Los Angeles wouldn’t affect Bernal because he is leaving office in January. He announced earlier this year that he wouldn’t seek a third term. That decision likely was motivated in part by a Board of Supervisors censure of Bernal for illegally spending taxpayer money to help host a private convention of all of California’s sheriffs and arranging for numerous employees to receive overtime pay for time spent golfing and socializing at the event.

Except for a couple of other elected department heads, anyone else in county government would have been fired but the supervisors couldn’t do that. There was some discussion of suing the sheriff but the supervisors opted for a censure instead. Even Supervisor John Phillips, a former Bernal supporter, joined in the vote.

Bernal has also been dogged by several escapes from the county jail, rapes of inmates by staffers, a number of in-custody deaths and revelations of unprofessional investigations in the narcotics squad. If the county administrator or supervisors could conduct performance reviews of the sheriff, he’d likely get “needs improvement” marks across the board – except for campaign fundraising and appropriate attire.

And throughout Bernal’s second term,  examples of sexual harassment and discrimination issues have dribbled out, starting with a complaint to the state Fair Political Practices Commission.

That complaint, still under investigation, alleged that Bernal had had affairs with at least two female subordinates and had failed to report his free use of a former county supervisor’s guest house as a rendezvous spot.

One of those women, another veteran deputy, was forced to retire after she broke off the relationship with Bernal. She later filed complaints with the county’s civil rights office and the state Equal Employment Opportunity Commission alleging that she was subjected to race-related harassment within the department at the end of the affair.

She alleged that a sheriff’s detective, Sgt. Bryan Hoskins, made repeated inappropriate comments to her, leading to a $10,000 settlement. She said both of her complaints were ruled substantiated.

Bernal reportedly has denied having had a relationship with that woman but he has not responded to repeated requests for comment. Hoskins reportedly told the state and county agencies that he had not made any inappropriate remarks. He did not respond to phone calls last week.

County officials are said to be concerned about how the settlement was paid out to Bernal’s accuser. The woman told Voices that the Sheriff’s Office disguised the settlement as a payroll expense in order to hide it from the Board of Supervisors.

The woman said that after she moved out of the area, high-ranking sheriff’s officials made calls to her next employer attempting to blackball her and Mineau appeared at a worker’s compensation hearing to oppose her application for benefits.

California long ago outgrew the need to be policed by men and women well qualified to ride horses in parades.

Bernal was remarkably underqualified when he first ran for sheriff in 2014. He had been a deputy, the lowest rank, for 11 years and hadn’t served on any of the department’s special teams such as SWAT or search and rescue. He won because of heavy campaign contributions from family connections in the oil and ranching industries and support from the local Republican Party, which apparently will support anyone registered with the GOP. Also helping his cause was that his opponent, incumbent Scott Miller, ran a lackluster campaign partly because he was slow to recognize Bernal’s political strength, and because a cluster of Bernal’s supporters in the department managed to falsely implicate Miller in a relative’s drug operation.

Some or many will reflexively oppose any effort to erode the independence of county sheriffs even though California long ago outgrew the need to be policed by men and women well qualified to ride horses in parades.

When Bernal was elected sheriff, he had never hired or fired anyone. He probably hadn’t received any of the sexual harassment training required of most corporate executives. And he had never worked in narcotics or homicide or warrants or any of the other divisions he was expected to supervise.

One of his main functions was to schmooze the Board of Supervisors, particularly at budget time. He never seemed comfortable with any part of that and neither did those he sent in his place.

Unlike hundreds of police agencies across the country, the Monterey County Sheriff’s Office has no civilian oversight, no panels of the type that routinely clash with the Los Angeles County sheriff over unnecessary roughness, racial profiling and other law enforcement sins.

With the November election approaching, many Monterey County voters are banking on Chief Nieto to fix the climate in the Sheriff’s Office. Before moving to Marina, she had been the highest ranking woman in the Los Angeles Police Department. Others, however, caution that the Sheriff’s Office culture has developed over generations and that it will take more than one person to dramatically change a male-dominated paramilitary operation.

Still, efforts like that of the Los Angeles County supervisors suggest that a significant share of Californians could be ready for sheriff’s departments with more professionals and fewer cowboy hats. There are those who feel eliminating direct elections of sheriffs would reduce the ability of voters to shape the values and techniques of law enforcement. A good counter argument is the way things have been working in Los Angeles and Monterey counties.