A local hero and a one-of-a-kind Chicano activist, archivist and warrior has died. Juan Martinez passed away on May 10 after a long battle with cancer. Juan defied all the odds and remained a fighter to the end.

Inspired at an early age after he and his father came upon a horrible bus crash that killed 32 farmworkers near Chualar, Martinez devoted his life to improve conditions for immigrants in the Salinas Valley for about five decades.

I will remember Juan — also known as Johnny or Juanito — for his great sense of humor, his consistent si se puede attitude, his big ideas, his great storytelling, and his pride and dignity as a Gonzales-born, Salinas Valley original.

Juan’s father was a World War II veteran who settled in Gonzales with Juan’s mother. They had four children. Juan grew up being called “Johnny” and was known as Johnny by friends from his school days. He played football at Gonzales High School and grew up Chicano as  farmworkers’ movements took shape throughout California and the Southwest.

Juan was a longtime advocate for preservation of the Old Salinas Jail as a landmark to Cesar’s historic incarceration and as what he believed would be an ideal site for a Salinas Valley labor and cultural history museum. 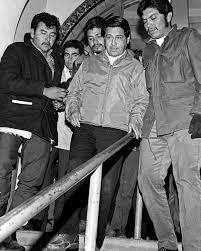 Juan Martinez, second from left, at the county jail.

I first met Juan when I was hired as an attorney by California Rural Legal Assistance in its new Migrant Farmworker Project in 1978. Juan was working as a community worker with CRLA, helping poor families qualify for various benefit programs while maintaining his connections with broader community initiatives and campaigns.

Juan shared a story of his presence at the Chualar Crossing bracero bus crash in 1963, a tragedy in which 32 immigrant workers were killed when a makeshift bus stalled on the Union Pacific railroad line and was demolished by a passing train. As Juan remembered it, he and his father were driving south on Highway 101 when they saw the commotion in the fields shortly after the accident. Juan was 11 years old and he entered the field with his father as they tried to help in the aftermath of the crash.

Juan carried those memories and images of the dead workers, and he said it explains his lifelong commitment to farmworker justice. The Chualar tragedy also inspired Juan to push the state legislature to name  a segment of Highway 101 between Chualar and Gonzales the “Bracero Memorial Highway.” Those signs stand today on the north and southbound segments of the highway. For many, these signs stand as testament and tribute to the bracero workers who perished — and also as tribute to Juan’s efforts to establish the memorial markers.

In addition to collecting documentation of the Chualar bus crash and other tragic accidents that took the lives of braceros, Juan became an archivist of much of the labor history of the Salinas Valley and Monterey County. He co-authored “Voices of Change: The People’s Oral History Project,” a history of Monterey County, with Gary Karnes and Karen Araujo. The book features a compilation of oral histories of community activists and organizers.

Juan was also a dedicated collector of classic lowrider cars, newspaper articles, posters, flyers, flags, feathers of raptors and much, much more.

One of Juan’s prize possessions was a UFW flag that he made to carry at the funeral march for Cesar Chavez in Delano in 1993. The flag was 6-by-6 feet with the flag’s normal red field made black as a sign of mourning. Since the funeral, Juan has carried the flag to various UFW events and gatherings to collect the autographs of UFW co-founders, leaders and activists in the white circle field of the flag. Juan carried the flag, folded in a suitcase, for display at many labor events.

Always involved, he used one of his collections — he amassed a large array of candidates’ campaign signs and used them ingeniously to build shelters for those without houses in Monterey County. As he pointed out, the signs were lightweight and waterproof with laminated front and back. 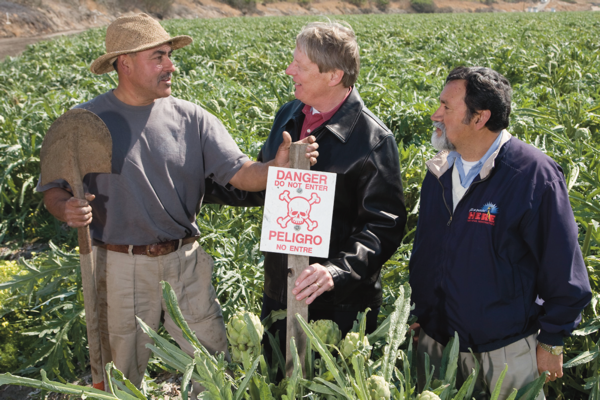 Since the passage of the field posting ordinance, Juan joined other local advocates with the Safe Ag Safe Schools campaign to protect students and staff from pesticide drift and he advocated for the ban of various pesticides proven to be cancer and/or birth defect causing including the highly toxic neurotoxin chlorpyrifos.

Juan will be missed by all who knew and loved him. As many have commented, “Juan was one of a kind.”

Juan, Johnny, Juanito was a Salinas Valley original. He will be remembered for his wonderful catalogue of stories and his capacity for injecting humor and drama into the stories he told. He will also be remembered for his abundant spirit, generosity, compassion and warrior/activist presence.  We will miss you, Juan. ¡Viva Juan Martinez! ¡Presente!

Bill Monning is the California State Senate Majority Leader Emeritus and a member of a longtime Men’s Support Group that included Juan Martinez.