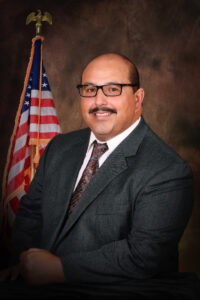 The race for Monterey County sheriff will be held during the primary election in June. Unless one candidate gets more than 50 percent of the vote, the two candidates receiving the most votes will compete in a runoff as part of the November 2022 general election.

Jose Mendoza, a retired commander with the Monterey County Sheriff’s Office, is one of four announced candidates to replace Sheriff Steve Bernal, who announced earlier this month that he will not seek a third term in the 2022 election. Other candidates are expected to enter the race. Voices put a series of questions to Mendoza, and they are listed below with his responses. The other candidates are invited to respond to sets of questions as well. To do so, they should contact Royal Calkins at calkinsroyal@gmail.com or (831) 595-8899.

Q: Commander Mendoza. You ran for sheriff before. What is prompting you to run again?

A: The reasons are too many to list at this time. Many have come out publicly in the local media and are things I know to be true.

Three years ago, there was a third candidate, Deputy Scott Davis, who was endorsed by the Deputy Sheriff’s Association. After some consideration, I decided to bow out of the race and support Davis since it appeared to be in the best interest of the employees and organization. If you recall, it looked like Davis had a good chance of unseating (Sheriff Steve) Bernal. However, several weeks prior to the election, several sheriff’s commanders came out publicly and made several allegations against him that were later determined to be unfounded. The damage was already done. Bernal denies any involvement but I and many other employees disagree.

After the election, two of the commanders involved were immediately “rewarded” by Bernal by being promoted. This is just one of many examples of unethical behavior that has motivated me to run for sheriff again. Bernal has tarnished the Sheriff’s Office badge by failing to lead by example. His continuous unethical behavior has caused irreparable damage to the Sheriff’s Office image and to the law enforcement profession as a whole.

Q: You left the department as a commander. What makes you feel you have enough management experience to handle the job?

A: It’s worth mentioning that I am also a U.S. Army veteran.  While in the service I learned many leadership traits and most importantly the meaning of honor, duty and respect. You don’t see any of these traits in the current sheriff and his administration.

I retired as a commander after 24 years of honorable service. I have over five years of supervisory experience and over 14 years of middle management experience. There were many opportunities where I was tasked with being the acting captain or acting chief during their absences/vacations. I have completed many supervisory, management and executive courses as required by the California Peace Officer Standards and Training (POST).

During my tenure as a sergeant, I was selected as the Deputy of the Year in 2012 for my innovative ideas and management of the Classification Unit in the jail. As a commander, I managed every division in the jail, always looking for ways to improve and implement “best practices.”  As the support services commander I was responsible for overseeing many projects, mostly in the jail with some in the multimillion-dollar range.

I am very familiar with personnel matters and employee rights such as the Peace Officer Bill of Rights (POBAR), SEIU, etc.

I’m fiscally responsible. I currently own several properties, two of which are paid for. All of my vehicles are paid for. I have NO credit card debt. I am frugal with my personal finances and I would apply that same standard to the sheriff’s annual operating budget.

Q: Setting aside the various scandals that have marked Steve Bernal’s tenure, what do you think of how he has managed the department?

A: Bernal has been a huge failure. He has neglected his primary responsibility of overseeing the jail, resulting in many lawsuits related to inmate suicides, the Hernandez jail lawsuit (requiring better staffing and other improvements) and the mismanagement of the $87 million jail expansion project that was supposed to be completed in the summer of 2018. Bernal’s 10-year plan is a list of broken promises. His lack of fiscal accountability is just another example. Bernal inherited an $89 million dollar budget from former Sheriff Miller in 2014. For fiscal year 2021-2022 the sheriff’s budget has increased to $135 million. I have several cost-reducing measures that I will be putting out shortly.

Q: You say the largest responsibility of the Sheriff’s Department is management of the jail. How would you run it differently?

A: Pursuant to California Government Code Section 26605, the “Sheriff shall take charge of and be the sole and exclusive authority to keep the county jail and the prisoners in it.”

I would make the jail priority No. 1. I worked under five different sheriffs and I could honestly say that this is the worst that it has ever been. With the exception of former Sheriff Mike Kanalakis, every sheriff neglected the jail and focused more on patrol duties and their personal political agendas. As a result, here we are today in crisis with the jail lawsuit that was recently extended indefinitely due to non-compliance issues. The jail expansion project has been mismanaged and is over budget. The jail is plagued with inmate suicides, resulting in millions being paid to the inmates’ families. The Sheriff’s Office also continues to struggle with recruitment and retention due to the chronic issues and toxic work environment in the jail, which contributes to excessive overtime, resulting in misuse of taxpayer money. Currently, the jail takes up approximately 65 percent of the sheriff’s total annual operating budget.

The last time there was any sort of consistency was under former Sheriff Kanalakis. There wasn’t any turnover in the upper management ranks as we saw with the Miller and Bernal administrations. It was obvious to the employees at the jail that Kanalakis truly cared about what was occurring at the jail. The inmate population also noticed that because the sheriff would take the time to speak with the inmates in the different housing units.  As sheriff I would reinstitute the monthly sheriff jail inspections in order to address the long list of issues.

In 2011, Scott Miller came into office with his own outside administration. In four years, the jail went through five chiefs, each with their own agenda and leadership style. It was chaos.

In 2015, Sheriff Bernal came into office. One of his promises was that he was going to do away with the internal politics and promote from within, indicating that he was not going to bring in any outsiders as Miller did. To everyone’s shock and surprise, Bernal brought in several outsiders and one retired commander to fill the undersheriff and deputy chief positions. At the end of the first year, they retired. The perception among the troops was that they did not care and only accepted the positions in order to spike their pensions. This was a huge blow to morale. The jail is still dealing with lack of consistency and ethical leadership.

As sheriff, I would promote from within. There are currently many outstanding supervisors and managers who would do a terrific job. There are also several recent retirees who were forced into retirement due to the Bernal politics and who would make excellent executives.

I would require the jail chief to work within the walls of the jail. Currently, the jail chief’s office is in the administration building (out of sight, out of mind).

Lastly, whoever I select as part of my management team would have to commit to a four-year term. No pension spiking.

Q: Voices and some other media outlets have reported on various investigations and other matters that raise serious questions about Bernal. He was investigated by the DA’s office for his handling of the CSSA Convention and he remains under investigation by the state Fair Political Practices Commission for, among other things, accepting the free use of a former county supervisor’s guest cottage as an alleged liaison location for an affair. Can you give us your thinking on those matters?

A: I am very disappointed in Bernal. I’m also disappointed in his management team for not having the moral courage to “speak truth to power” when it mattered.  His team did not protect him and instead enabled him.

It is a fact that there are several investigations looking into Bernal’s actions and conduct. I hope these investigations are objective and he is held accountable to the residents of Monterey County to prevent this type of conduct from ever happening again.

I would be open to creating some sort of civilian oversight committee as an extra layer of accountability to prevent the Sheriff’s Office from falling into the wrong hands again.

Q: Do you believe you were treated fairly by the Bernal administration while you were with the department?

The system is broken. Monterey County currently has policies in the books pertaining to sexual harassment, hostile work environment, employee retaliation, equal opportunity, etc. The Sheriff’s Office also has the same policies on its books that are not enforced by the sheriff’s administration. It is a fact within the Sheriff’s Office that if you “speak up” or file a complaint, you will be retaliated against. The current system allows offenders to continue their unlawful conduct while the victim is “re-victimized” by the county Civil Rights Office’s failure to act.

I plan to address these issues with the Board of Supervisors.

Q: Are you ready for the rough and tumble that accompanies a sheriff’s election?

A: Yes. Most importantly, I have the full support of my immediate family. I also have a large following of retired and active deputies who support me.

Q: Would you mandate vaccinations for the department staff?

A: This is a very political and controversial subject depending on one’s perspective and beliefs. The short answer is no.

I believe myself to be a team player and consensus builder. As sheriff the last thing I would want to do is having to mandate my employees who do not want to get vaccinated.  This important decision should come voluntarily without the threat or fear of losing your job.  If we don’t handle this correctly, we are going to end up with disgruntled employees and a depleted police force. At the end of the day, the sheriff is still responsible for providing law enforcement services to its residents. Virus or no virus, the jail, courts, and patrol still have to be staffed.

Q: How do you plan to raise money for your campaign?

A: Initially, I will be using my personal funds. I already have some people committing to donate to my campaign. As my campaign kicks off, I will focus on putting out my message and vision for the Sheriff’s Office going forward.  I’m confident my message will encourage small donations from the public that wants change.

Q: What have you been doing since you left the department?

A: Trying to enjoy retirement by spending time with family and friends. Working on home improvement projects. Traveling.

Q: What else would you like to tell us?