The two packed rooms — the main space and the overflow room — were poised for drama when the not-quite-full Peninsula water board gathered to pick a new member who would complete the board’s seven-trustee lineup.

On one side Monday night, the larger side, were supporters of Measure J, the ballot measure that just two weeks earlier had finally and formally signaled that Monterey Peninsula residents have had enough of Cal Am Water and its seemingly out-of-control prices. They were rooting for a new board member who would solidify the board majority supportive of Measure J’s plan for a feasibility study followed by a public takeover of the private water utility.

That group, still basking in the Election Day victory, championed either Kate Daniels, the chief aide to board member and county Supervisor Mary Adams; or former water board member Judi Lehman; or public water stalwart Michael Baer, who has fought Cal Am  on various fronts. On the other, woe-is-us side, the hotel industry-chamber of commerce-GOP side of the equation, they were dreaming of someone like applicant Scott Dick, who had openly criticized Measure J and who works for the Monterey County Association of Realtors. Though he handles government affairs for the association, Dick denied any role in the nasty campaign mailers that the association sent out bashing various progressive candidates, including George Riley, the public water advocate who knocked off water board Chairman Andy Clark in the Nov. 6 election. Dick denied it but no one believed it.

Pick me, Dick told the board, and you’ll be insulating yourself from accusations of bias down the road when the takeover process reaches the courtroom. (Some in the room remembered how Dick opposed the unsuccessful effort to incorporate Carmel Valley while simultaneously campaigning to be on what would have been its first city council.)

Supporting the idea of sending Dick into enemy territory were golf course manager Gary Cursio, pipeline contractor Paul Bruno and Realtor Jeff Davi, who pleaded with the board to go for “balance.” Appointing a Measure J supporter would expand the pro-Measure J bloc on the board, potentially tainting the process and not in Cal Am’s favor.

The best choice, the outnumbered Cursio-Bruno-Davi contingent suggested, would be the candidate most like vintner Bob Brower, the longtime board member whose move out of the area and recent serious illness combined to create the opening. But if they couldn’t get someone that friendly to Cal Am, that supportive of Cal Am’s seemingly endless desalination project, they were hoping for someone who might be able to scuttle the takeover in the event of a shift in water board makeup someday.

When the speechifying ended, it was time for nominations and a vote. The process had been carefully set out in advance. Each board member could nominate one applicant and the nominations and voting would continue until an applicant received at least four of the six possible votes.

The betting was that Daniels, Lehman and Dick would each receive a nomination but not enough votes to win during the early rounds. The thinking was that board members and Measure J supporters Adams, Brenda Lewis and Molly Evans would go for Daniels or Lehman while board members Clark and Measure J opponents Jeanne Byrne and Ralph Rubio would go for Dick, creating a stalemate that would be broken after several rounds and the emergence of a compromise candidate, either water engineer Gary Hoffmann or lawyer John Shupe. Though largely unknown in political circles, each comes with solid technical credentials. 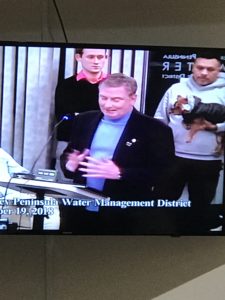 It happened faster than that. Rubio, soon to be the former mayor of Seaside, quickly nominated Hoffmann, who prevailed on the first vote. Bim-bam-boom-boom. To the surprise of some, Evans had sided with Rubio, Byrne and Clark, as though she knew exactly what was up and wanted to get it over with.

First off, while addressing the board before the vote, Hoffmann declined to take a position on Measure J, saying it didn’t matter.

According to his resumé, he is an engineer who lives in Carmel Valley and has worked 19 years as a sanitary engineer for the California Department of Public Health in Sacramento and Monterey. In Monterey, he supervised a staff of engineers, technicians, other scientists and clerical workers responsible for regulating more than 200 public water systems in Santa Cruz, San Benito and Monterey counties. Among other things, he was heavily involved in creation of the small Sand City desalination plant and the water management district’s aquifer storage and recovery facility. He also performed inspections of various Cal Am facilities on the Peninsula.

Later, he briefly worked as general manager of the Georgetown Divide Public Utility District in the foothills overlooking Sacramento.  He is on the Monterey Bay Sanctuary advisory council and is active in whale and marine mammal rescues.

With the upcoming departures of Rubio, Clark and Lewis, the makeup of the board – the Monterey Peninsula Water Management District board — moving forward will be Hoffmann,  Byrne, Adams, Evans, Riley and newly elected member Alvin Edwards, a former board member and former Seaside City Council member.

Adams, Evans, Riley and Edwards form a core supportive of Measure J’s mission. The seventh and final member, replacing Rubio, will be a Peninsula mayor selected by a committee of Peninsula mayors, most likely in January.

Among the possibilities for the seventh seat are incoming Seaside Mayor Ian Oglesby, incoming Del Rey Oaks Mayor Allison Kerr, incoming Carmel Mayor Dave Potter, incoming Pacific Grove Mayor Bill Peake and Monterey Mayor Clyde Roberson. The only one who is known to have announced an interest in the seat is Roberson, who campaigned for Measure J.

Potter, a former county supervisor, also served several terms on the water board. He announced no position on Measure J.

2 thoughts on “The Partisan: New water board member professes neutrality on Cal Am takeover”