When they were children, Alejandra Huerta and her two older sisters would be awakened at 5:30 a.m. by their mother, who would lovingly do their hair and make their breakfast before taking them to school.

Their parents, Consuelo and Alejandro Huerta, would then make their way to the fields in Watsonville, pick strawberries all day, then come home to make dinner and ask their children about their day.

“I remember their hands were always pink from the berries, and they were completely exhausted when they came home from work,” says Huerta, now 37. “I also remember they never once missed one of our school functions — open houses, parent-teacher meetings, or whatever. They’d take a shower, change their clothes, and we’d all go.”

When did the three sisters start thinking about going on to college? Huerta laughs at the question.

“We were not allowed to get married until we earned a college degree,” she says.

Huerta has a few of those. A scholarship from the California Strawberry Scholarship Program allowed her to go from Salinas High (Class of ’99) to UC Santa Barbara, where she originally studied chemistry and math, then changed direction. She spent 2003 in Rio de Janeiro, Brazil, graduated as a Spanish/Portuguese major, then returned to Salinas and revisited her first love — science — first at Hartnell College, then at UC Santa Cruz, where she earned a second bachelors degree in chemistry.

“I was always fascinated by how you could mix chemicals and come up with medicines, and so many other things,” she says. “I also developed a passion for physics.”

The California Strawberry Scholarship Program assisted her through each of those phases of her education, and continued

to support her when she went on to earn a Ph.D. in 2015 from the University of Wisconsin. Her middle sister, Brisa Huerta Price, a year older, also was a Strawberry scholarship recipient, graduating from UC Santa Barbara. She works today as an after-school programs coordinator for a school district in Southern California.

“I always got between $500 and $1,000 from the Strawberry Commission, depending on the year, which helped me pay for books and housing,” Alejandra says. “College was not cheap. Our parents helped where they could, and we paid for the rest with federal grants or loans, but every little bit helped.”

More than 1,100 students have a family story that mirrors the one told by Huerta as recipients of awards from the scholarship program, which has handed out almost $2.6 million in scholarships to the children of fieldworkers since the program was launched in 1996. 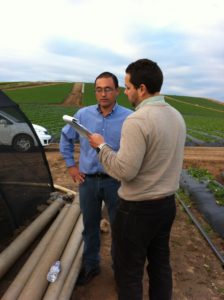 “About three years before that, our board started looking for a way to give something back to our employee workforce, other than just their direct pay,” says program chair Neil Nagata, who spearheaded the launch alongside Ed Kelly, Diane Porter-Cooley, Bill Moncovich, Pat Riordan and others. “Now every strawberry grower in California is helping the children of farmworkers with their education if they decide to attend a junior college, a college, a university (public or private), or a trade or tech school. We wanted to make sure we were covering the whole gamut — not just university students.”

Scholarship recipients are required to have graduated from high school with grade-point average of 2.0 or better and have a parent who has been a field worker.

And, by the way, having a sky-high grade-point average coming out of high school isn’t a consideration. The selection committee figures those kids are likely to find scholarship help from other sources, whereas the B and C students are often left without opportunities.

“Frankly, if they meet the criteria — a 2.0 GPA, and parents who are fieldworkers — they’re going to get approved for a first-year scholarship,” says Carolyn O’Donnell, communications director for the California Strawberry Commission. Students continue to receive scholarships from the program in subsequent school years. The amount is determined each year, case by case, by the committee, which monitors each student’s progress in terms of college grade-point average and activities that help advance their chosen career path.

“Each student gets a letter from us every year,” O’Donnell says. “If we see a student who is really stepping up, we send a letter of congratulations. If we see kids who are starting to fall behind, we’ll send a letter of encouragement — something that lets them know we care about them, with a suggestion that they make themselves available to any counseling and support services that might be at their disposal.”

The awards for new recipients, plus students who are continuing their college educations, are made at a banquet, where each student is offered an opportunity to say a few words to an audience that includes parents and siblings of the recipients.

“I call it ‘Get Out Your Hankie Week,'” O’Donnell says. “Most of the students use that moment at the podium to talk about all the hard work their parents have done to get them to that point. It gets very emotional.”

Many students are the first in their family to pursue an advanced education. Many of the parents came to the United States in search of a better life for their children, and still don’t speak English.

Huerta, the Ph.D., did not begin to learn English until her family relocated from Watsonville to Salinas when she was in the fourth grade. “In Watsonville, we spoke Spanish in school and we were taught in Spanish, but in Salinas, everything was in English,” she recounts. “My teacher started talking to me on that first day of class and I had no idea what was being said. Some of my classmates actually translated for me.”

She says she was in middle school or high school, taking special-education classes, before she was deemed “English-proficient” according to state standards. “I was fine from that point on, but I was never really encouraged to pursue honors courses,” she said. “I thought about it, but it was never offered to me.”

Huerta’s success story is remarkable, but not rare. O’Donnell points to a Ventura County family in which the oldest brother obtained a college degree, went to work for the Social Security Administration, and built his own real estate business on the side. His younger brother earned a degree in aeronautics and space engineering, and works today as a systems engineer. Their sister is an engineering major today.

O’Donnell also shares the story of two brothers who currently are attending Sacramento State, one majoring in interior design, the other in business, with a plan to use their degrees to create a family business together.

Past scholarship recipients have become doctors, nurses, lawyers, scientists, educators, and law-enforcement officers.
Some, like Huerta, have used their education to give back to the agriculture industry: She currently is a United States Department of Agriculture (USDA)/National Institute of Food and Agriculture (NIFA) postdoctoral fellow at Colorado State University, doing microbiology studies in a laboratory on plant pathology.

“I’m at a loss for words to describe how good it feels whenever a scholarship recipient thanks us, and tells us that our help and encouragement made a difference in their lives,” Nagata says. “And that happens often.”

Funding for the California Strawberry Scholarship Program comes from direct fundraising, grants, and public donations, which can be made through the commission’s website at www.calstrawberry.com/scholarships

Dennis Taylor is a freelance writer in Monterey County. Contact him at scribelaureate@gmail.com.

LEARN HOW YOU CAN SPONSOR YOUR FAVORITE CHARITY WITH PARTNER VOICES