Well-placed sources in and around Carmel government say former Monterey County Supervisor Dave Potter is about to announce that he will run for mayor of Carmel, seeking to replace Steve Dallas. The former supervisor confirmed his intentions in conversations with several political figures and others on Thursday.

Dallas late last year became the subject of an internal investigation into allegations of sexual harassment and threatening behavior. The investigation resulted in the City Council issuing a public reprimand of Dallas and led to questions about the background of City Attorney Glen Mozingo, a close political ally of the mayor. 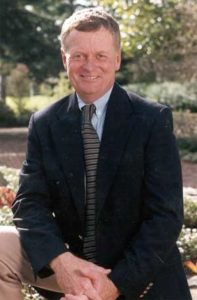 Dallas has said he plans to run again and at least one other candidate has announced campaign plans, nuclear safety engineer Eugene Hughes.

Absent another surprise contender, Potter would have to be considered a heavy favorite in the race despite numerous past controversies of his own. He would be expected to pick up support from Ken Talmadge, Dallas’s opponent two years ago, and actor Clint Eastwood, who famously served as Carmel’s mayor in the late 1980s.

Neither Potter nor Dallas could be reached to comment early Thursday. Former Mayor Sue McCloud, a likely supporter of a Potter candidacy, said Thursday morning that it would be premature to comment but another former mayor, Barbara Livingston, confirmed that Potter intends to run.

Various sources in Carmel said there had been considerable speculation about a Potter campaign in recent weeks as well as talk that his wife, Monterey hotel manager, Janine Chicourrat, might run instead.

Potter lived in Monterey for most of his political career but now lives just a short walk from Carmel City Hall. He represented the 5th District on the Monterey County Board of Supervisors for 20 years, leaving office at the start of 2017 after being defeated by United Way executive Mary Adams.

Despite various controversies, including repeated investigations by the state Fair Political Practices Commission, Potter at one time was clearly one of the most powerful political figures on the Peninsula. While sitting as a county supervisor, he also served at various times on the California Coastal Commission, the board of the Monterey Peninsula Water Management District, the Fort Ord Reuse Authority board and several other key bodies.

For the bulk of his time on the county board, he crafted an image as an environmentalist, helping to protect Carmel Valley and other parts of his district from unwanted development. But in the later years, he frequently and quietly aligned himself with development interests. He was accused of casting token votes against development projects, such as the planned Ferrini Ranch development, after receiving assurances from other supervisors that the venture would be approved.

Throughout his political career, Potter has weathered personal financial issues, losing a couple of homes to foreclosure and even being accused by his ex-wife of forging her signature to loan papers. She later retracted that accusation.

Hughes is a semi-retired nuclear safety engineer who ran his own consulting companies and who has been meeting with city officials to familiarize himself with city issues.  He filed notice of intent to run last month.

Dallas, a property manager, was elected to the council four years ago and was elected mayor two years later after campaigning as the antidote to former Mayor Jason Burnett. Burnett, the politically ambitious heir to the Packard computer fortune, attempted to dislodge the considerable amount of deadwood that had accumulated in city offices under the longtime administration of Sue McCloud but he ran into a buzzsaw of opposition led by Paul Miller, publisher of the weekly Pine Cone newspaper.

The Monterey County grand jury later reported that Miller had practiced unfair and inflammatory journalism in order to force the removal of Burnett’s top administrator but Burnett’s political career could not be salvaged.

The campaign to replace Burnett pitted Dallas against Talmadge, the longtime city councilman and Burnett ally. Among Dallas’s most fervent campaign supporters was Mozingo, now the city attorney. He had served on the city Library Commission until resigning in protest of Burnett’s approach. His wife, Heidi Burch, resigned for the same reason from her position as assistant city manager.

Dallas made relatively few waves as mayor until late last year when Kim Stemler, head of the Vintners & Growers Association accused him of unwanted touching and making sexual innuendos. After others came forward with accusations of inappropriate behavior, the city hired a private investigator and launched an inquiry headed by Mozingo, the Dallas partisan.

Several of those interviewed by the investigator later said they believed their concerns were ignored. Mozingo provided the community with contradictory accounts of the investigation’s focus.

That led to scrutiny of Mozingo’s background, resulting in a couple of Voices of Monterey Bay articles detailing several unverifiable and inaccurate entries on the resume’ he submitted to the council while applying for the city attorney position. Second article

Mozingo and other city officials have not commented on the findings reported by Voices but one city employee and two elected officials have said he will be asked to explain the discrepancies later this month.

This article was updated Thursday afternoon