Photo by Beyond My Ken | The website for Glen Mozingo’s longtime law practice in Newport Beach said the firm maintained an office in this structure, the Helmsley Building in New York. The rental agent for the building says, however, that the firm used a mail-forwarding service there but had no office.

When he successfully applied to become Carmel’s city attorney last summer, Glen Randy Mozingo apparently decided it would be best to play down his work as an estate planner and business incorporation specialist and play up his relatively limited government experience.  For good reason. The Carmel City Council wanted someone expert at local government and really didn’t care about matters of probate or incorporation, the fields that dominated his legal practice.

The result was a resume that often drifts into the realm of fiction or at least out of the realm of verifiable fact. Here’s an article I wrote on that subject a couple weeks ago. It details several discrepancies, including Mozingo’s claims that he is a member of the British bar (which cannot produce any record of his membership), that he had never been sued for malpractice (though he has), and that he had received top  congressional awards for assisting with important legislation (though the awards were actually the Republican Party’s thanks for campaign contributions).

Since that piece appeared, I have dug a little deeper into one of the most intriguing entries on the resume — Mozingo’s statement that he had once been “special counsel” to Los Angeles Police Chief Daryl Gates. The tough-talking Gates was one of the best known and most controversial police chiefs in U.S. history before being pushed into retirement in 1992 in the wake of the Rodney King beatings and the resulting riots. Gates died in 2010 at age 83.

In the resume Mozingo presented to the Carmel City Council, he leads off with: “Served as special counsel to the Chief of Police, Los Angeles Police Department, 8 years, 1984-1992, Daryl Gates Chief. This work was related to reviewing and consulting with the Chief of Police regarding proposed municipal ordinances that would or could affect departmental policies of enforcement as well as drafting proposed testimony for City Council presentations.” 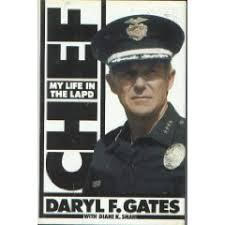 It is possible that the passage is accurate but, based on conversations with several people who worked closely with Gates, as well as a close relative, it appears much more likely that his work with the chief was limited to estate planning. If he did advise the chief on law enforcement matters for eight years, the lawyer managed to escape the attention of several people who worked closely with Gates at the time.

“Never heard of him,” said lawyer Jay Grodin, who represented Gates in connection with several pieces of litigation before the chief’s retirement.

Another lawyer in private practice, Harry Melkonian, said by email, “I worked with Chief Gates over a number of years and represented him in some litigation. I am not familiar with attorney Mozingo. Of course, that does not necessarily mean anything; but until I received your email, I had never heard of him and I do not recall Daryl Gates ever mentioning him.”

A former deputy chief who worked under Gates, who asked not to be identified by name, said he had never heard of Mozingo. He recalled that the City Attorney’s Office routinely briefed the chief on the type of matters Mozingo describes.

One past employee of that office who worked closely with the chief’s office said she had not heard of Mozingo, and a current employee who has been with the office for more than three decades said she would be surprised to learn of an arrangement like the one he described.

In response to a public records request, the Los Angeles controller’s office said last week it has no record of any payments to Mozingo for legal work or anything else. A spokesman for that office said if Mozingo had been paid as a city employee, contractor or vendor, some record most likely would have shown up.

The controller’s search did turn up record of payroll checks to Mozingo’s father, Glen Roy Mozingo, who retired in 1974 as a Los Angeles Police Department detective. Detective Mozingo was a contemporary of Chief Gates, which likely explains how Mozingo the attorney became acquainted with the chief.

“Glen was very proud of his father,” Gates’ younger brother, Steve, recalled in a telephone interview.

Steve Gates is a retired LAPD captain. He said Mozingo had done a significant amount of estate planning work for the Gates family and was very generous with his time. Asked if Mozingo had provided any of the services he discusses in the resume’, the younger Gates said he would rather not comment. “I have nothing but good to say about Glen Mozingo,” he said.

In his autobiography, “Chief,” published shortly after he left the department, Daryl Gates doesn’t mention Mozingo.

Mozingo, off on vacation, did not respond to requests for comment for this piece. The city staff and most members of the Carmel City Council have not publicly commented on Mozingo’s resume’ or any plans to investigate his assertions. Mayor Steve Dallas isn’t returning phone calls on the subject.

A week after the March 27 Voices article challenged Mozingo’s resume’, Mozingo left for a two-week vacation in England. Councilman Bobby Richards said this week that Mozingo has indicated he plans to address the issue some time after his return.

“I think we will come out with something one way or the other,” Richards said.

Sweet old Paul Miller over there at the Carmel Pine Cone apparently has been too busy to weigh in on the matter of Glen Mozingo’s creative writing, but not too busy to apply a heavy hand to letters to the editor.

Former Monterey City Councilwoman Nancy Selfridge’s letter to the editor regarding sweet old Cal Am water was published in last week’s edition of the CPC along with a few words that weren’t there when she stuck it in the mailbox.

She mentioned that because of the way Cal Am’s business practices have led “to us paying the highest water bills in the nation.” After nation, Miller added, “according to a study from a Washington lobbying group.”

It is true that Food & Water Watch did the calculations that bestowed that distinction on Cal Am’s local customers. It is also true that F&WW  is a lobbyist, an advocate for clean air and water and other good things. Also true, Miller enjoys almost unlimited space in the weekly paper and is free to use it to say whatever he wants about Food & Water Watch under his own name. But here’s something Miller may not know about newspapering. If you feel you need to add something to a letter, put it in an editor’s note. Make it a parenthetical. Write an editorial about it. Whatever. But don’t put your words in someone else’s letter without their permission. It’s about professionalism and courtesy.

Gimme a call, Paul, and I’ll spell it out for you.

Calkins writes a weekly column on local politics and public affairs. Your comments on this piece are welcome. See below.

2 thoughts on “The Partisan: A Curious Connection to Daryl Gates Carmel city attorney boasts of his purported role as a 'special counsel' to the late police chief”