An off-year primary election may not generate a heap of interest among voters, but local special interests are spending like drunken sailors this year, throwing money at candidates in two Monterey County campaigns.

With a month remaining before Election Day, candidates for Monterey County sheriff and the county supervisorial seat representing North Monterey County have collected more than $1.1 million from the usual suspects — friends, real estate moguls, captains of industry, labor unions and random retirees with money to spend on politics.

And since both positions up for election this year drew so many candidates, it’s unlikely that winners will be declared when the votes are counted after the June 7 election. Both elections require the winner to capture a simple majority of votes; failing that, the top two vote-getters will qualify for the general election in November.

Which means that $1.1 million is just the start of the campaign spending, as hundreds of thousands more will certainly be raised by the surviving candidates for the run-offs in November.

The latest campaign disclosure statements were filed with the Monterey County Registrar of Voters for an April 23 deadline. Voters should start receiving mail-in ballots soon.

Generating the most interest among folks with big money to spend on Monterey County politics are Kimbley Craig, the Salinas mayor who is up against five other candidates in the race for 2nd District supervisor, and sheriff’s Capt. Joe Moses, who is hoping to replace his current boss, Sheriff Steve Bernal, who is retiring at the end of the year. As of April 23, Craig’s campaign has raised $249,000 and change, while Moses has collected about $280,000 since launching his campaign last year.

BOARD OF SUPERVISORS, 2ND DISTRICT

While Craig waited until the last minute to launch her campaign, and only started receiving contributions this year, her campaign disclosure statement is filled with big-spending donors, including at least 15 who gave $4,900, the maximum allowable under campaign finance laws.

Also throwing financial support toward Craig’s campaign were Supervisor Luis Alejo ($1,000) and Supervisor Chris Lopez’s campaign fund ($2,500). Lopez is also up for election this year, with token opposition. Supervisor John Phillips also gave $1,000. Phillips is retiring at the end of the year from the position that Craig and the other candidates are seeking.

Craig’s campaign statement lists 65 contributions from donors outside of Monterey County, worth about $47,000. Another candidate, Steve Snodgrass, has taken to social media in recent weeks to lament the amount of money coming in from outside the district, an apparent jab at Craig, but he doesn’t name names of either donors or recipients.

Also seeking election in the 2nd Supervisor’s District are Regina Gage, Glenn Church, Grant Leonard, and Guadalupe Melgoza. Of those candidates, Gage has raised about $146,000 since last year. Snodgrass has received more than $137,000, and Church has raised about $138,000. Melgoza and Leonard have raised about $2,700 combined.

Regina Gage, the executive director of Meals on Wheels in Salinas, is running her second campaign for the supervisorial seat after failing to unseat Phillips four years ago. Her campaign disclosure statements indicate she is the favored candidate among labor unions, with at least 16 contributions from unions and labor leaders totaling almost $50,000.

A dozen donors spent the maximum allowable for the Gage campaign, including eight of the labor organizations. Other $4,900 donors included former Monterey County Supervisor Jane Parker, Eric Peterson, Steuart Samuels and A&G Wealth Management. She also loaned her campaign about $27,000.

Steve Snodgrass recently retired as chief financial officer for Graniterock. He has received two max-limit contributions, according to his financial disclosure statements, from Gourley Construction and Chris Bunn. Other notable contributions include $500 from former North Monterey County Supervisor Lou Calcagno. Snodgrass has also lent his campaign $29,000.

Glenn Church, a Christmas tree farm operator and the son of a former North County supervisor, received two $4,900 contributions, one each from George Somero of Carmel and Marjorie Kay of North County.

Among the significant contributors to the Church campaign are Supervisor Mary Adams, who represents the Monterey Peninsula on the Board of Supervisors, who gave $2,500. He has also received monetary support from former supervisors Karin Strasser Kauffman ($2,000), Marc Del Piero ($1,000) and Judy Pennycook ($100). Pennycook’s ex-husband, Bill Pennycook, contributed $3,000, while retired Rep. Sam Farr added $1,500 to Church’s campaign.

(Editor’s note: Glenn Church is married to Kathryn McKenzie, a co-editor at Voices of Monterey Bay.) 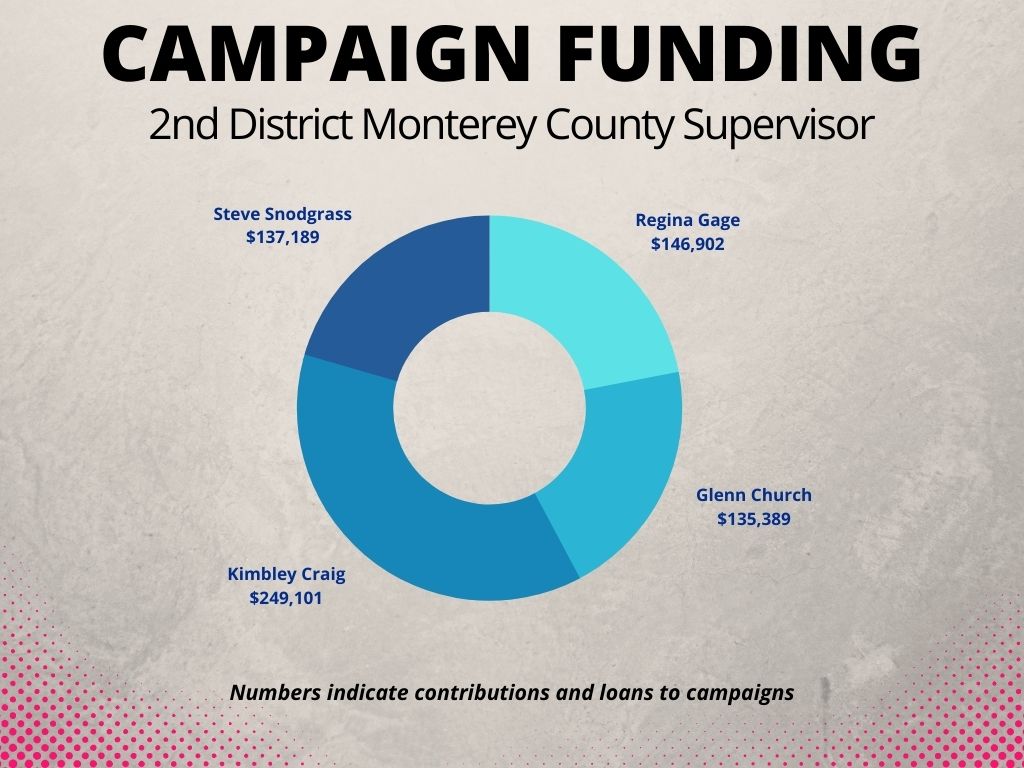 Moses is a captain in the Sheriff’s Office and his financial supporters include many of the same established business leaders in the county that contributed to Kimbley Craig’s campaign for supervisor, according to his campaign statements. That includes the Salinas Valley Leadership Group, which has a history of endorsing candidates the group believes are best for business interests in Monterey County.

Since he cranked up his campaign last year, Moses has received 15 contributions of $4,900, the maximum allowed by individuals, businesses or political action committees. Three of those max contributions came from the Braga farm family of Soledad, including Chris Braga, Rodney Braga and their business, Braga Fresh Family Farms.

Other contributions of note to the Moses campaign were $1,000 from Farr, and $4,500 from Dr. Taylor Fithian, who represents Wellpath, a private company that provides health services to hundreds of jails and prisons in the United States, including Monterey County Jail. Moses is captain of the county jail.

Also in the race is Chief Tina Nieto, who runs the police department in Marina. Her campaign disclosure statements show that she has raised more than $80,000 so far, including a number of smaller donations. She has received only two $4,900 contributions, but one of them is from the Monterey County Deputy Sheriff’s Association. Four years ago, with Moses among the DSA’s leaders, it endorsed unsuccessful candidate Scott Davis in a bitter campaign that resulted in litigation that continues to this day. The Marina Club Casino was the other $4,900 contributor to Nieto’s campaign.

Jeff Hoyne, another contender, has raised about $58,000. He is the chief of police and assistant city manager in Del Rey Oaks, from where he has received significant financial support from a former mayor, Jerry Edelen, and current Del Rey Oaks Councilman Scott Donaldson, who pitched in $500 each. An officer in Hoyne’s department, Brian Perez, contributed $4,820 to the campaign.

Hoynes’ largest contributors are Bushar Al Sneeh and Shatha Abosada, both of Monterey; Jack Van Valkenburgh of Pebble Beach and Ozell Murray of Stockton. All gave the maximum of $4,900.

Justin Patterson, a deputy at the Monterey County Sheriff’s Department, is also on the ballot.. He has received $4,900 contributions from Julie Lavorato of Paso Robles and Chris Patterson of Talent, Ore. In total his campaign has raised more than $63,000 through April 23. 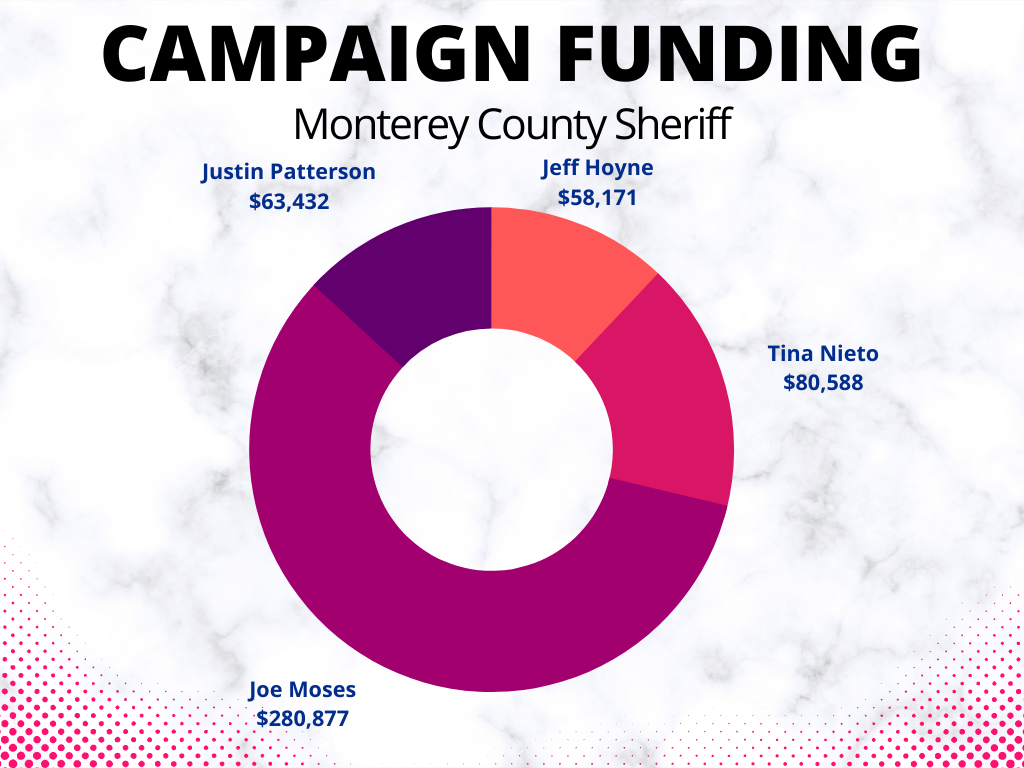 One thought on “Money in Politics Monterey County primary elections for sheriff and North County supervisor raise more than $1.1 million”