To: The MacArthur Foundation
From: Joe Livernois
Re: Genius Grant Application

Please accept this letter as my formal appeal of the MacArthur Foundation Genius review committee’s rejection of my grant application. In summary, I am troubled that grant administrators cling to the myth, delineated in its rejection letter, that my mental proficiencies are that of a “drooling goober” and that I “don’t have the common sense God bestowed on a numbnuts.”

Allow me to explain myself. I am disappointed to read that my Genius Grant application appeared to lean heavily upon the contents of my high school transcripts, without allowing room for any reasonable explanation. Suffice to say, my genius did not fully blossom during the first 13 years of my schooling. A battery of guidance counselors led me to believe that those high school “issues” would be resolved with course completion at the community college level, but apparently that was not the case.

But, more egregiously, the grant committee appeared to base its rejection on a careless assumption that I had anything to do with the so-called “Biotic Baking Affair of 1999.” I have long been frustrated that this case of mistaken identity has unfairly dogged my professional career.

Please know that I agree with the committee’s assessment that anyone involved in the Biotic Baking Affair is a “blooming idiot” who doesn’t deserve consideration as a “genius.” But I must say that I am not the blooming idiot you think I am.

A review of the attached article from The New York Times will clarify that I had absolutely nothing to do with smooshing a cream pie into San Francisco Mayor Willie Brown Jr.’s face. That was Gerard Livernois. Not Joe Livernois. I do not know a “Gerard Livernois,” and neither does anyone else in my immediate Livernois circle. Also, I have never been affiliated with the Biotic Baking Brigade, despite my abiding appreciation for alliteration.

What’s more, I fully oppose the weaponization of pies.

In the interest of transparency, I do admit to one brief and innocent encounter with Willie Brown Jr., but the occasion was inappropriate for the tossing of pies. I was in Delano at the time, nearly 30 years ago, attending the funeral for Cesar Chavez. The funeral mass was prefaced by a four-mile march along Garces Highway, from Delano to “The Forty Acres,” which at the time was a favorite outpost for the United Farm Workers Union’s brass.

Chavez’s body had been encased in a plain pine casket, and thousands of mourners streamed behind on the march in somber procession. A succession of family members, politicians, celebrities and civil rights leaders, including Gov. Jerry Brown and the Rev. Jesse Jackson, took turns bearing the coffin to The Forty Acres. Willie Brown, then a member of the state Assembly, wasn’t among the pallbearers despite his celebrity.

Instead, a group of reporters found Willie Brown across the two-lane highway from The Forty Acres compound, leaning coolly against his black Town Car. He looked  fly in his Brioni suit and a pair of thousand-dollar shoes. Pacing about the embankment on the passenger’s side was Willie Brown’s driver, a beautiful man in a beautiful suit who seemed to recognize that he and his boss were costumed inappropriately for the occasion. Willie Brown was without question the best-dressed man on the Garces Highway that day, and possibly the whole of the Central Valley. His driver was second best.

“Did you march this morning?” I asked Willie Brown. (I was there as a newspaper reporter, and so asking stupid questions was my stock in trade. For purposes of the Genius Grant application, please do not hold my profession against me.)

Brown looked at me as though he had been asked by Delano’s presiding village idiot to dance the jitterbug. He was there to attend the funeral, sure, Brown answered, but there was no damn way he’d be marching under this hot sun, not in those shoes. For dramatic effect, he dabbed at imperceptible beads of sweat on his forehead with the blood-red handkerchief he pulled from his Brioni breast pocket. The assembled reporters sort of laughed because it was Willie Brown, and also because each of them knew that Willie Brown’s blood-red handkerchief probably cost more than their entire wardrobes.

Now, if Willie Brown ever deserved to be pied, it was while he was standing along the side of Garces Highway on April 29, 1993, having shown up at a farmworker funeral dressed like a Wall Street tycoon and holding court, at length, that a man of his stature shouldn’t be expected to march in a farmworker procession. Given the restraint required on such a solemn day, no one threw a pie in his face.

So, no, I can state without equivocation that I have never flung a pie at anyone, including Willie Brown, and I would pray that this clarification is sufficient to reopen consideration of my application.

And one more thing: I am distressed that the Genius Grant Review Committee refused to acknowledge and to consider the declaration of my personal genius by the aforementioned New York Times. 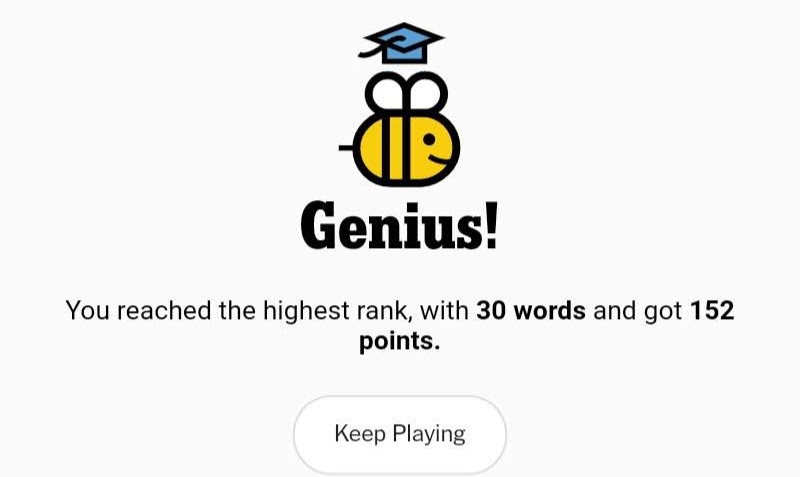 As described in the original grant application, I have worked doggedly to attain the status of Genius via my daily participation in the Spelling Bee contained in the NYT’s online puzzle section. Spelling Bee challenges participants to construct as many 4- to 7-letter words as they can, using seven pre-selected letters. The puzzle bestows rankings of the participants’ skills based on their daily accomplishments, ranging from “Beginner” to “Moving Up” to “Great” to “GENIUS!”

The New York Times has designated me as a bonafide GENIUS! They were so impressed by my genius that they appended an exclamation mark, as you can plainly see.

This is actually the second time I have been called a GENIUS! by the elites at The New York Times. The first time is lost in the ether because I couldn’t figure out how to take a screenshot on my Kindle. I have since learned, after significant tutelage on YouTube, how to screenshoot.

In fact, it is my belief that any consumer of electronic products who is capable of snapping screenshots should be eligible for a MacArthur Foundation Genius Grant.

One thought on “Unappreciated Genius I did not throw that pie at Mayor Willie Brown Jr., and more proof of intelligence”