Editor’s Note: This story was produced in collaboration with palabra., a publication of the National Association of Hispanic Journalists.

Childhood memories in our hometowns begin with first kisses, bullies, overarching parents and their mired lives. Complicated as these childhood experiences are, sometimes picking up an excellent book to shapeshift the paradigm of your memories so that love can shine through is all that is needed. 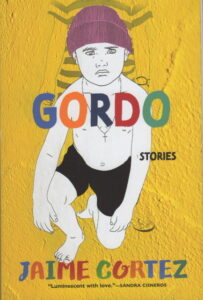 I had the pleasure of interviewing Jaime Cortez about his debut short story collection, “Gordo.” In this book, written primarily as a memoir, Cortez writes about immigrant and first-generation experiences on the Central Coast of California in a way I’ve never read before. These aren’t the stories told at political rallies to garner votes. They aren’t the stories activists tell in the struggle for the undocumented and their rights. However, I would argue that they should be. Cortez has written a book filled with stories that bring nameless faces out from behind the shadow of the mainstream, only to give them light and love.

Based in Steinbeck Country and my hometown of Watsonville, Cortez shows the vulnerable rawness of what it means to be an outsider. Themes in this book include the undocumented, first-generation experiences, toxic machismo and poverty, but also joy, family, queerness and autonomy. The themes make their way through the pages and our hearts. Powerful doesn’t begin to describe what Cortez has done here.

The New York Times’ review identified the “superpower” of Cortez’s work: “In ‘Gordo,’ Cortez assumes the role of a documentarian, depicting the comical, difficult and heartfelt realities of his characters, where hurt, in some form or another, may be lurking around every corner, but so is joy.”

Cortez is a writer and visual artist based in Watsonville and the San Francisco Bay Area. His fiction, essays and drawings have appeared in diverse publications. “Gordo” was published in 2021 by Grove Press, Black Cat, and is longlisted for the Andrew Carnegie Medal for Excellence in Fiction. It has been chosen as a Best Book of the Year at NPR and BookPage.

The following is the Voices of Monterey Bay interview with Cortez, slightly edited:

Olga Rosales Salinas: When preparing for this interview, I realized that I often blurred the line between journalist and fan-girl. You’ll have to forgive some of the apparent flattery.

Jaime Cortez: Thank you! I am always happy to meet local Watsonville readers who recognize the community as their own.

ORS: Let’s get the hard questions out of the way. How did you react when you heard of Vicente Fernandez’s passing?

JC: I woke up to several text messages and emails saying, have you heard? After scrolling through my feed, I realized it was true. Vicente wasn’t just Madonna or Elvis; Vicente Fernandez represented an entire country for four generations of fans. The closest I can describe is that he was what Bob Marley was to Jamaica. He represented the country as a whole.

ORS: One of my favorite passages from your book describes Vicente perfectly. You wrote, “Oh my God, it’s always and forever Vicente. Vicente doing rancheras. Vicente doing boleros. Vicente shouting out the gritos. Ay ay ay! Vicente is the king of the drunk guys who are only happy when they’re sad.”

JC: Yes, it was Vicente’s music that allowed grown men to cry. I don’t think that will change now that he’s passed. It’s the same with tequila. Tequila is Mexico. Vicente is Mexico.

ORS: We meet your characters as young kids working alongside their parents in the tomato fields of San Juan Bautista, and then again when your main characters, Gordo and his family, move to Watsonville. How many of the locations in your stories were from your lived experience?

JC: The whole book is about 80% memoir. I’ve changed names and fictionalized some of the storylines, but the locations and the fields where we worked were real.

ORS: You’ve written a powerful depiction of what it means to be an immigrant farmworker in this country through short stories that carry a connecting narrative. Can you tell us how these short stories turned into a novel?

JC: Well, at first, I didn’t want to write a novel. I started writing the short stories over 20 years, and when I approached my editor, I was encouraged to tie the stories together, and I’m glad I did. Now it’s a novel.

ORS: Because of the way you’ve tied these stories together, readers can bounce between timelines and characters. For instance, your character Raymundo’s story begins in grade school, and we meet him again as a professional hairstylist in Watsonville. In essence, we get to see his whole life, but that’s not the case for other main characters.

JC: I wanted to show the complex nature of being “othered” in small towns. Raymundo’s story showed that, but also his story shows perseverance and comes full circle.

ORS: One of my favorite things about this book is that you never say the big things aloud. For instance, Gordo recognizes that he’s different but doesn’t know why or how just yet. There are some moments where you think he might realize that he’s not attracted to girls, but he doesn’t quite get there. Can you speak to that?

JC: I think it’s important to note that a young kid, like my main character, Gordo, is just learning how the world works. He sees things that he doesn’t understand but will one day. He knows that the machismo he’s surrounded by seems strange to him, and he also knows that strangeness isn’t allowed in small towns.

ORS: Another theme that is present but not fully depicted is the domestic abuse suffered by Esperanza, Gordo’s mother. Gordo says this about his father, “He’s a little drunk, but he’s not mad, so even though my ma’s not home, I think I’ll be okay. Maybe.” This one sentence tells a whole story of violence in the home without telling the story outright. Can you speak to that choice?

JC: In this case, my heroine plays a crucial role in showing me survival. I felt that that was the more powerful story to tell — my mother’s strength. In one scene, while helping Delia, a neighbor stuck in a domestic abuse relationship, Esperanza gives a piece of advice that troubled me as an author.

JC: Yes. Although I wrote this particular story precisely how I remember it happening, I had to decide whether having my matriarch say such a thing might be damaging. I had to ask myself, is it good advice?

ORS: That’s an important question. Are people in domestic abuse situations able to fight back? Should they fight back? For instance, what if your abuser has a gun?

JC: Exactly. But in the end, Esperanza, or my mother, said those exact words, and I felt they were essential to the time and place. I decided to stay true to that experience.

ORS: If that whole story was true, then your uncle, his little red car, and Alex’s return are also true?

ORS: Since the release of this book in August of 2021, you’ve had interviews with NPR, The New York Times, and several others. That must be magical and overwhelming.

JC: Overwhelming is the right word. All I wanted to do was tell my stories, and they’ve gotten such a great response. It’s every writer’s dream. It’s also overwhelming. I’m taking it one step at a time and scaling my excitement about the possibilities that are coming my way.

For more information about Jaime Cortez, visit his website www.jaimecortez.org.

Olga Rosales Salinas is a content writer and freelancer who produces poetry, short stories, and essays. Her debut collection of poetry and prose, "La Llorona," was published by Birch Bench Press and is available now on Amazon. Proceeds from the publication benefit The Rosales Sisters' Scholarship; the scholarship is being awarded to students on the Central Coast.

One thought on “The collected wisdom of Jaime Cortez Based in Steinbeck Country, 'Gordo' shows the vulnerable rawness of what it means to be an outsider”