Spoiler alert: There are “devout Christians” out there who find it offensive — even blasphemous — that worshipers are invited to hunker down with an ice-cold beer during Sunday morning services at Greater Purpose Community Church in Santa Cruz. Go figure.

And sure, as religious symbols go, an open bar at 11 a.m. might be slow to catch on — not many parishioners at Greater Purpose actually imbibe — but Pastor Christopher VanHall likes the visual.

“We want people to see a different side of Christianity, and it’s one of the ways we can break down the assumptions. You walk in our door and realize, ‘Wait … Christians can drink during church? The Bible doesn’t say anything about that!’” said VanHall, a 35-year-old “recovering evangelical” who now preaches progressive Christianity.

“In fact, the first Christian ritual mentioned in the scripture that still survives is communion, which was done with wine, so it’s very much a part of church history,” he noted. 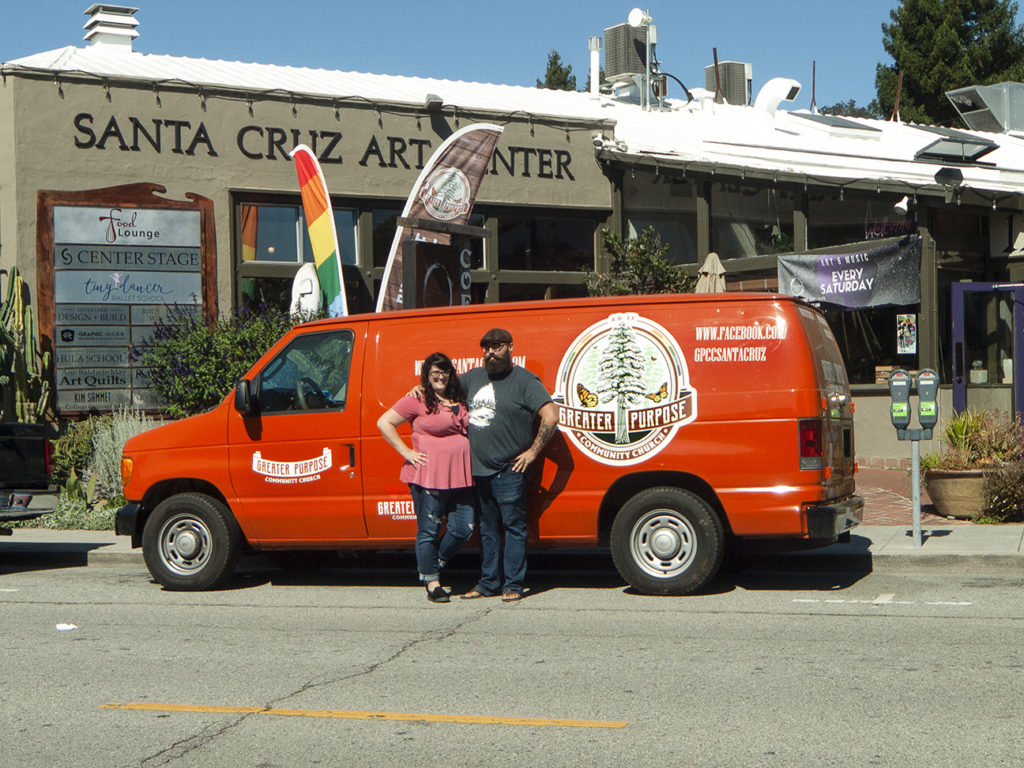 In fact, by the end of the year the church intends to open the Greater Purpose Brewery, a nonprofit restaurant, bar, microbrewery and coffee shop at 1117 Pacific Ave. in Santa Cruz (in the former Logos bookstore) that intends to donate 30 to 60 percent of all revenue to select charities. Those are likely to include Planned Parenthood, Diversity Center and Save Our Shores, among others. Patrons will get to choose from a list of charities to determine where their donation goes.

At the restaurant that is being planned, menu items will include some of the Southern comfort foods that VanHall grew up with, as well as games that include ping pong, corn hole and Giant Jenga, among others.

VanHall doesn’t do the brewing himself, but he does come up with ideas for the beers that are served up with sermons, noting that his brewer has more than a decade of experience.

“Some of our best brews include a honey blackberry basil ale, a jalepeño pumpkin porter, an apple cinnamon kolsch, a black cherry dark chocolate coffee stout, and an extra-hoppy imperial IPA,” he said. “We also have craft mead and cider.”

If offering beer, wine and mead during his sermons is an annoyance to religious fundamentalists, VanHall is okay with that. His willful violation of this taboo is mostly a statement symbolizing VanHall’s own religious awakening: Christianity has been systematically hijacked for centuries by people who have cherry-picked the Bible for their own purposes.

'Our services are very casual, and a little chaotic at times, which is fine.'

Not surprisingly, his congregation of about 100 (not including those who watch weekly services online) is heavily populated with refugees from more traditional religions. About half, he guesses, are agnostic or atheist (an atheist serves on the church board). Roughly one-third are former evangelicals. The rest are a mishmash of other identities.

“I can’t say that I’ve heard anybody describe themselves as a Satanist, but that also would be okay,” said Bernie Zaleha, a religious sociologist with a Ph.D who occasionally delivers the Sunday sermon. “We’ve got one guy that attends regularly who gives tarot card readings. I don’t know if he calls himself a witch, but he might.”

Zaleha, who was brought up as a Seventh-day Adventist (“an evolution-denying, fundamentalist sect”), considers himself a Unitarian Universalist. The label he applies to his own belief system is “atheistic Christian pantheist.”

His wife happened upon the Greater Purpose crowd at a Black Lives Matter gathering, found the people interesting, and Zaleha followed up by interviewing VanHall while researching his dissertation.

“My interview with Christopher didn’t make it into the dissertation, but I was interested in him, and soon I found myself attending pretty faithfully every week,” he said. “As a scholar of American religion, I can say his church is certainly unlike anything I’ve ever encountered.”

A large part of the appeal of Greater Purpose Community Church is its policy of inclusiveness. They have canceled Sunday services to participate in events for Black Lives Matter, gay pride parades and other social justice rallies. 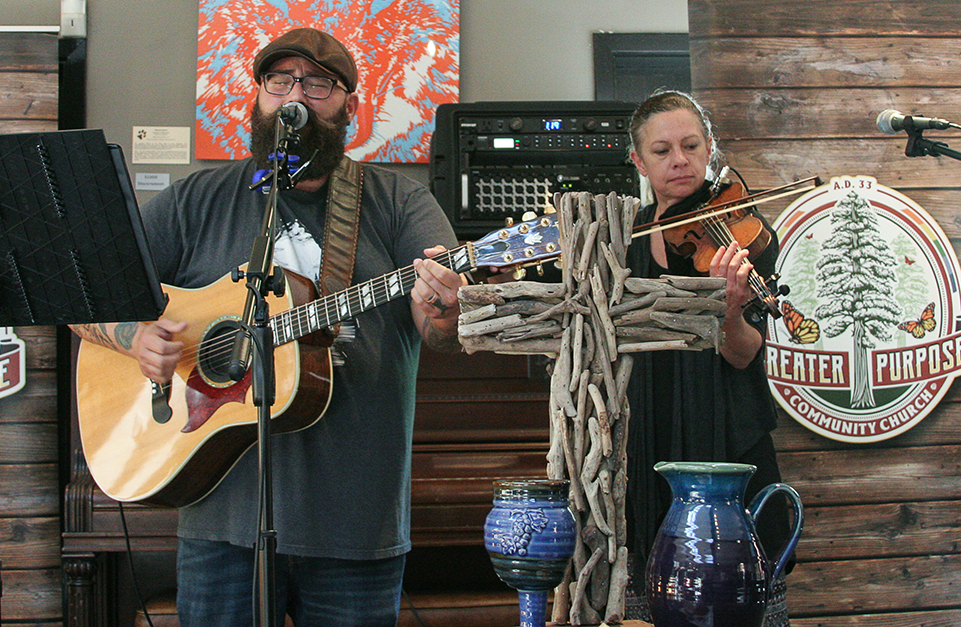 And although VanHall integrates certain aspects from his former life as an evangelical into his Sunday services, the format is untraditional.

Sunday services — with the beverages and non-alcoholic offerings, plus breakfast pastries — are held in a café-like setting at the Santa Cruz Food Lounge at 1001 Center St.

“Christopher usually starts by presenting a body of scripture, but then he’ll say something like, ‘What sticks out to you about that?’ or ‘How can you apply this to your life?’ And then his sermon will morph into an open discussion,” said parishioner Meredith Cabezas, who was 17 when she began having second thoughts about the teachings of the evangelical church where her father was pastor.

“We focus a lot on the teachings of Jesus, and the message of Jesus, but it doesn’t really matter whether you personally affirm the divinity of Jesus,” she said.

“The church kind of aligns with the ethics of Christianity, but we don’t necessarily hit on the spiritual aspects as hard,” VanHall said. “Our services are very casual, and a little chaotic at times, which is fine. I think that’s probably what the early Christian church was — controlled chaos.”

VanHall grew up as a Southern Baptist in South Carolina, a true believer in conservative Christianity since his high school days. He was ordained at 22 and served as a worship minister — the music director — for large evangelical megachurches for several years.

“For a long time, I believed that the most authentic expression of Christianity was conservative evangelical theology, because that’s what we were taught,” he said.

But VanHall began to notice a “giant list” of viewpoints espoused by the church that were unrelated to the Bible.

'The more I studied the Bible, the more liberal I became.'

Cabezas says she had a similar journey — a “deconstruction from faith,” she said — at age 17, when she was attending a Christian high school in Florida.

“I just started realizing, ‘Wait a minute, this stuff I’ve been learning in church all these years doesn’t add up for me. I don’t understand it,’” she said.

Though she remained Christian, Cabezas says she felt relieved after splitting from the evangelical church. At 18, she moved from Florida to Santa Cruz, stopped attending church, fell in with an atheist crowd, then began searching for a more-progressive outlet for her spirituality.

“I found Christopher’s church last summer and it was pretty much love at first sight,” she said. “I met two congregation members who had grown up in the same evangelical denomination as me, and we had a lot to talk about. They understood me, and my questions, and my doubts. It was validating.”

The liberal nature of Greater Purpose Church, and its policies of inclusiveness, have not resonated well with some of the traditional crowd. The rainbow flags (symbolic of gay pride) that have been displayed outside the church have been vandalized several times and stolen. Evangelicals have lashed out at the church’s support of LGBTQ issues, Black Lives Matter, and, of course, serving beer during services.

'The fact that it’s considered blasphemous is especially appealing to me.'

‘I actually drink a beer while I’m delivering my sermon,” Zaleha said. “The fact that it’s considered blasphemous is especially appealing to me. If I’m not doing something heretical, I’m not really comfortable.”

“More than a few,” the pastor admits. “Most were messages on Facebook, but we’ve also had phone calls. The last round of threats came when a story about our brewery concept went viral. Some folks in the Aryan Brotherhood targeted us.”

Ali, who married Christopher in April 2018, said the threats were “terrifying,” but also validating.

“I felt like we were doing something right if those kinds of people were upset,” she said. “Advocacy is what we’re all about, because we’re standing up for people who often don’t have a voice. So it made me feel proud.”

More information about the church can be found on the website at gpsantacruz.com.

Dennis Taylor is a freelance writer in Monterey County. Contact him at scribelaureate@gmail.com

One thought on “Sermon on the Stout At Greater Purpose Community Church, serving alcohol is just another way to connect with the divine ”