The Grateful Dead screwed the pooch at the Monterey Pop Festival in 1967. It was dreadful. Even Phil Lesh, the co-founding bassist, admitted to Rolling Stone magazine several years ago that the Dead’s performance at Monterey Pop stunk.

“We have a tradition of blowing the big ones,” Lesh said. It was a famously bad performance, stuck as it was between two acts that absolutely shattered rock expectations on the Monterey Fairgrounds stage on June 18, 1967.

Frontman Jerry Garcia agreed that it “was one of the classic bad scenes for us.” Garcia described it this way for a television news interviewer: “We came onstage just after The Who finished smashing their equipment onstage for the first time in America. This is aahhh, the audience is devastated. The Who were beautifully theatrical, there’s clouds of smoke and explosions and they’re clearing away the debris. And so we came out and played our little act — ding ching ding ding — and then Jimi Hendrix comes on after us. We were erased from existence.”

The Dead had only been around for two years by the time they hit the Monterey Fairgrounds. It was their first appearance on the Monterey Bay as the Grateful Dead, but the bandmates had already broken new ground on the Central Coast.

On Nov. 27, 1965, when the Dead was known as The Warlocks, the band showed up at a house party in Soquel. It was the group’s first appearance at what was known as the Acid Test, a series of LSD-fueled parties hosted by author Ken Kesey and his Merry Pranksters, including beat icons Neal Cassady and Allen Ginsberg.

(Among the academics who have developed a boutique market for the analysis, study and recording of the Grateful Dead with the precision of Civil War historians, a debate rages over whether The Warlocks actually played a formal show at the Soquel party. Recall that everyone who was there was likely on acid. And anyway, if you can remember the ‘60s, you probably weren’t there.)

At any rate, it was the last time the group showed up anywhere as The Warlocks. At their next appearance, at an Acid Test house party in the Bay Area two weeks later, they were known as the Grateful Dead.

The band quickly took off, touring California and across the United States, developing a quick cult following as they refined a sound that would ultimately be known as a loose and psychedelic jam-band groove. The Grateful Dead defined the culture of the San Francisco-Haight-Ashbury-Fillmore scene.

But their long strange trip tripped up rather badly at the Monterey Pop Festival. Everyone remembers that Ravi Shankar’s performance was the sort of transformative experience that lent a logical thread to the pastiche of Monterey Pop, but it’s hard to fathom the Grateful Dead fitting in. And they didn’t. (Editor’s note: They didn’t fare much better two years later, when drugs, bad weather and a skeezy sound system conspired against the Dead at Woodstock; as Garcia himself said, “It’s nice to know you can survive as a band even after blowing the biggest gig of your career.”)

Rings for her fingers and bells for her shoes

However, the Dead redeemed itself 20 years after Monterey Pop during a sun-blessed two-day performance at Laguna Seca Raceway on May 9 and 10, 1987. 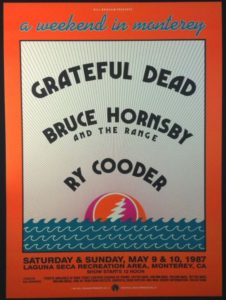 Having survived the onslaught of young people two decades earlier, the Monterey pearl-clutchers were still anxious about the hordes of dirty hippies, cosmic cowboys, spinners and acid heads who descended on Laguna Seca. (Some genius recently compiled 20 minutes of local news clips about the Dead’s Laguna Seca in a YouTube video that is downright hilarious, from the hippie buses, the traveling vagabonds and a young Romney Dunbar.) But the Monterey Peninsula managed to get through the weekend without major trippy hippie incidents.

The Dead were the Dead, of course. Jerry Garcia, never the picture of health, had gone into a diabetic coma that nearly cost him his life in 1986. The 1987 tour that led them through Laguna Seca was considered the launch of what would become the band’s second life, a life that brought them significantly more commercial success.

At Laguna Seca in 1987, Bruce Hornsby joined the band on keyboards and he and Ry Cooder opened the shows. Deadheads and hippie buses jammed the raceway campgrounds. The Dead’s sideshow circus offered standard hippie fare: black market haze and artful tchotchkes, tie-dyed undies and colorful dancing bears, rings for her fingers and bells for her shoes. And music. Trippy music, sublime notes that galloped and meandered from here to there and back.

The Dead did its Saturday show in a two-hour-plus performance. Later that night, it rounded up tripped-out campers and hangers-on at Laguna Seca and summoned them back to the bowl for the recording of the epic video for “Touch of Grey.” The band had been playing the song for about five years, but hadn’t yet laid it down on vinyl. They would record it for their “In the Dark” album, released later in the year, and the video was used to market the single.

Dead fan sites are loaded with stories about that evening. A fan named FattyMatty remembers eating a bunch of magic mushrooms, then getting corralled back to the stage with thousands of other blissed-out Deadheads. “We were in a slight fog, it was a bit cold, there were about 5,000 of us,” he wrote on one of the sites. “The boys did ‘Touch of Grey’ a hundred times it seemed, repeating parts, individual parts, licks, giant skeleton marionettes were on the stage dancing too, and Jerry looked tired. It was A LOT of fun.” Filming wrapped up about 5 a.m. Sunday, about eight hours before the second show.

The life-size marionettes, depicting Dead musicians as skeletons, were the stars of the video, as was the dog that ran off with percussionist Mickey Hart’s “legbone.” Years later, a 30-minute film about the making of the video was released by the son of the Dead’s other percussionist at the time, Bill Kreutzmann.

The video got tons of airtime on MTV — back when MTV exerted influence into the rock/pop music scene — and it introduced the Dead to another generation of music lovers. “Touch of Grey” became the Dead’s first and only No. 1 hit.

On the second day, Mother’s Day, Bill Graham himself introduced the Dead by publicly slamming the music writer from the Monterey newspaper for the savage review of the Dead that appeared in that morning’s paper. Typical of the Dead (and what made them wonderful), the back-to-back performances were completely different and the band didn’t play the same song twice the entire weekend.

Four months later, Pope John Paul II drew an even larger crowd at Laguna Seca during the first Papal Tour of the United States in history.

One thought on “The Dead’s Redemption in Monterey, and the Filming of ‘Touch of Grey’ Monterey Rocks #19”