After discovering The Mail, and tired of dropping quarters into clunky microfilm machines to read the newspaper, I was intent on getting permission to enter the Monterey County Historical Society’s vault, to examine their 1930s print copies of the paper. Mostly I wanted to glean the information I could get and finish that damned dissertation. 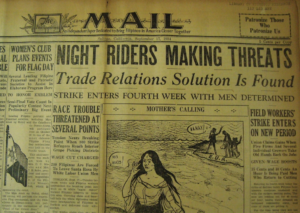 By some stroke of luck, Mona Gudgel, then director of the historical society, granted me permission to enter the vault. In that tiny climate-controlled room filled with documents, my experience of the original print pages did more than inform me about the newspaper and Filipino American history; it gave me a view into a long-lived community struggling to survive. When I saw the full-sized (big!) pages of old newsprint — its photographs, columns, editorials, reports, and ads — and when I pulled on the white cloth gloves and turned those fragile brown pages, I had my first fleeting sense that this journey would not stop with completion of my dissertation.

The large size of the pages was surprising. I’d gotten used to the shrunken size of today’s print newspapers, but they seemed puny in comparison.

The newspaper was founded by two labor leaders, Luis Agudo and D.L. Marcuelo. Delfin Cruz, a labor contractor, learned the trade from his predecessors and became the editor of The Mail in the mid-1930s; he remained its editor and publisher until 1983.

Within the short time I had in the vault, I scanned through reports of social events, lectures, graduations and weddings. I saw faded photos of families, merchants, students and children as well as churches, schools, temples and other organizations.

There were many advertisements, from Caucasian-owned businesses downtown, as well as Asian businesses in Chinatown. One small ad for the Chinese-owned Shanghai Cafe stated it served both “Filipino and Chinese dishes.” An ad for the “Manila Cafe” listed a Japanese proprietor. Suddenly, ads became fascinating code for business relationships and friendships between the Filipinos, Chinese and Japanese in the area.

There were also a few mysteries: the name “Frank Connor” made me wonder about the lone white man named as one of the three editors of the pro-labor The Mail. Ads and articles became clues that led me to specific addresses, once thriving markets, pharmacies, bars, restaurants and pool halls that are now empty boarded-up storefronts. There were reports of friendships, alliances and conflicts.

Editorials and testimonials helped me to imagine the extent of the violence that occurred during the Salinas lettuce strikes of the 1930s, and I could now associate 100 Lake St. with the Filipino Union Hall, which was raided by the police in 1934.

'It was a thriving immigrant neighborhood, albeit one that was segregated from the rest of Salinas.'

Salinas Chinatown became, in my eyes, more than a place where the Filipino editors of The Philippines Mail happened to produce the paper; it was a thriving immigrant neighborhood, albeit one that was segregated from the rest of Salinas. It’s possible that without the cross-cultural alliances formed within Chinatown — and a few outside the neighborhood — the newspaper would never have been published.

When I became one of the guest curators for the Filipino Voices exhibit in 2012 at the National Steinbeck Center, my understanding deepened further when I met members of the Filipino, Chinese and Japanese communities of Salinas and listened to their fascinating, often funny, “talk-stories.”

The Lee and Ahtye families came to life when I met their descendants, Wellington Lee and Wally Ahtye, as well as surviving extended family members and friends. My father and uncle worked in the agricultural fields of the Salinas Valley, and my mother did cannery work, so Al Baguio and Alex Fabros’ stories resonated, as did the stories of the Filipino, Chinese and Japanese women who worked in the packing sheds (and sometimes in the fields) and raised families.

I learned there had been two Chinatowns; the first one was built in 1872 by Chinese merchants. That was burned down in 1893; many Chinatowns in the western U.S. were torched during the 1890s and early 20th century when anti-Chinese racism was at its height, encouraged by groups like the Workingmen’s Club of Salinas.

But a new Chinatown was built. It became a haven for immigrant families, businesses and organizations until the 1970s, when “urban planning” made the neighborhood’s two-way streets one way, and a new overpass and iron fencing built by the railroad effectively cut off business traffic, further isolating the neighborhood.

Many (thankfully not all) of the old buildings were condemned and razed by the city, and as the old families moved out, blight set in; Chinatown became known for its illegal drug sales and violence. Eventually it also became a place where the homeless pitched their tents, and where they sought shelter, meals and other services.

Eventually, I completed that dissertation and filed it. Soon after the Filipino Voices exhibit closed, I joined Asian Cultural Experience, whose mission is to preserve the history and culture of Salinas Chinatown, and to build a cultural center and museum in the old Republic Café building.

I also joined in the efforts to revitalize Chinatown just as the U.S. economy started to tank in 2008; that effort would take longer than anyone guessed, and would require much discussion and cooperation — to say the least — across many local organizations.

This is the strength of the neighborhood: that, despite hardship, despite the cultural differences and conflicts contained within the community, memories of friendships and cooperation linger and provide hope. In the process, I learned, and continue to learn, about Chinatown’s history and culture, about the homeless people who now populate the area, about myself, and most of all about persistence.

Jean Vengua is co-chair with Cathy Chavez-Miller of Asian Cultural Experience in Salinas Chinatown. Vengua is also a writer and artist. Her work can be found at jeanvengua.com.