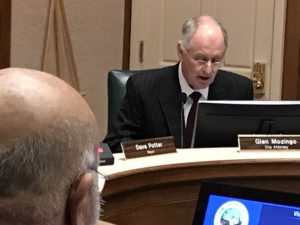 With no fanfare, Carmel City Attorney Glen Mozingo announced Monday that he will leave his position  in 90 days because the City Council deserves to have a good working relationship with its legal adviser.

Mozingo stressed that he had not been fired or asked to leave but acknowledged that his presence had been a significant issue in November’s election, in which two of the successful candidates, Mayor Dave Potter and Councilman Jeff Baron, openly challenged his qualifications for the position.

The announcement came as the council was preparing to go into closed session to discuss several items and perform a review of Mozingo’s performance. In that private meeting, the council was expected to provide Mozingio with a list of questions about several statements he had made on his resumé when applying for the job more than a year ago. The council had been scheduled to hold that review before the holidays but Mozingo was unavailable, claiming family emergency.

Over the past year, Voices of Monterey Bay has produced several articles challenging assertions the 72-year-old lawyer had made in the resumé, mostly about his job experience, education and awards.

Among many other things, Voices and others reported that he repeatedly had claimed to have won one of the nation’s highest civilian honors, the Congressional Gold Medal, which he had not. In defense of that claim, he had repeatedly provided proof only that he had received significantly lesser awards from the Republican Party in thanks for contributions to congressional candidates.

Mozingo also had claimed to have been special counsel to Los Angeles Police Chief Daryl Gates for eight years though he actually had done little more than provide informal estate-related advice to the Gates family. He wrote that he had never have been sued for malpractices though he had been, twice. He wrote that he had prevailed in more than 130 jury trials, a highly improbable number considering that he had specialized in probate and business formation work, not litigation.

Mozingo claimed in his application for the city job to have completed postgraduate legal studies at Oxford but, when pressed, could only produce evidence of studies at a less regarded institution. He claimed to have been general counsel for a non-existent fire district in Sacramento County and to have performed significant legal work for San Diego and other Southern California cities that have no record of such work.

Despite the distortions and discrepancies, the council last summer had extended his contract by five years and allowed him to hire two deputies, exposing the city to significantly higher legal costs. For several decades before Mozingo’s arrival, the city had gotten by with one half-time attorney.

Mozingo’s extended contract with the city provides that he can break the agreement with 90 days notice. The council that hired him had attempted to give him a measure of job protection by including a provision that he could be terminated only with the votes of at least four members of the five-person council. With the election of Potter and Baron and the loss of support from Council Member Bobby Richards, Mozingo no longer enjoyed majority backing but that majority did not appear to have the four votes in hand to formally end the relationship. Nonetheless, Potter and Richards had made it clear that they would be pushing for a change regardless of whether they could muster four votes.

Because of uncertainty about the council’s plans for Monday’s meeting, the council chambers was nearly deserted at the time of Mozingo’s announcement, with only this reporter and four Carmel residents in the audience. One of those, Hugo Ferlito, had regularly criticized Mozingo, especially for costing the city $56,000 in legal expenses to fight a successful public records lawsuit filed by Voices in order to gain access to public records related to his application. Following the announcement, Ferlito told the council he was pleased to see Mozingo resign but still feels the lawyer should reimburse the city for those legal costs.

Also in the audience was retired lawyer Chris Campbell, who also had been critical of Mozingo’s contract and the misrepresentations in his resumé.

Mozingo and the council members were not available for additional comment because they adjourned into the closed session immediately after his announcement.