Fred Hernandez is our not-so-secret Santa this year. He’s the Spirit of Christmases Past, Present and Future. He’s Buddy the Elf and Rudolph and Frosty and the Three Wise Guys all rolled into one. Fred is Room at the Inn, El Hermitano and St. Michael the Archangel, but without all the denominational whoop-de-doo.

And this year — during Christmas season 2019 — Fred Hernandez provided us the Miracle of Nuestra Señora de la Lechuga. 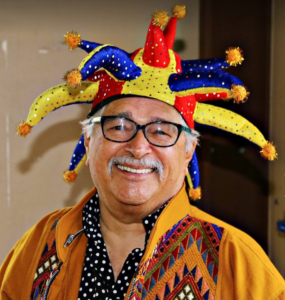 Fred is a friend. It is a friendship forged over the years as we worked side by side at The Monterey County Herald. He was the assistant city editor there, back in the day, and together we bonded over the newspaper’s owners, which we always regarded as common enemies, out to destroy the fabric of journalism and to demolish what was left of our fragile morale.

He’d been in journalism since Sophocles wrote “Antigone.” He was one of those old-school newspaper creatures who had worked with the legendary pillars of inebriation and bad behavior during the glory days of the San Francisco Examiner newsroom. He had been a copy boy who had ripped news of JFK’s assassination from the teletype machine, and he moved up from there. (Or was it Archduke Ferdinand’s assassination? The story always changes.)

After an interlude as a hippie hotelier near Yosemite, he settled into Pacific Grove and The Herald and sobriety.

Through it all, Fred never let loose of his outsized sense of romanticism and his puckish pranksterism. He is constantly doing little things for everybody, if he likes you, and big things for little people. He laughs harder than everyone else. He weeps deeper. Jerks and newspaper publishers and Trumps piss him off something fierce.

But it was that sentimental streak, manifested in a million different ways, that set him apart from everyone else in a newsroom filled with cynics, malcontents and dead souls.

Nice, I would say, probably a bit more skeptically than necessary. It all seemed like a lot of trouble, over the top. Don’t get me wrong. I love Christmas and I’m fully capable of puddling up while watching random Hallmark Christmas movies. But, holy cow, Fred! These advent calendars and this effort every single year went beyond the pale.

And then last month, around Thanksgiving, Fred showed up at our front door with a huge plastic bin and a massive black garbage bag. Both were filled with gifts, wrapped festively. Each package had a number on it, a number to coincide with each of the 25 Days of Christmas. His Advent Calendar to us.

We had done absolutely nothing to deserve it. I’ve been distracted all year, and I haven’t been a good friend, certainly not the sort of friend he might depend upon. Yet he bestowed this upon us!

So every day since Dec. 1, we’ve opened a new gift. And with every gift we open, we develop a deeper sense of the value of a friend who knows and who loves us, deeply and below the surface. Each gift — or most of them, anyway — is his tribute to our lives.

Here’s an example: I’m a big fan of garden-variety monkeys. Any sort of primate will do. And I like to read. So of course on Day 4 of Fred’s Advent Calendar, I opened a box of matching monkey bookends. Sad little monkeys. But monkeys.

Another example: My wife Loma was raised in Holtville, down near the Mexican border, and somehow Fred had found a green dish towel with “Holtville Bulldogs” embroidered upon it, which was special enough. But Fred had taken the extra step, and he had Loma’s name embroidered on the towel.

Some of the gifts are just plain wicked silliness — An airhorn? Really? — and a few of them are slightly off the mark.

But the coup de grace was something Fred couldn’t wrap in a box.

He had remembered that I once created the mythical community of Santa Lechuga. The town was supposedly a forgotten place in South Monterey County with a forgotten California mission dedicated to a forgotten saint by a missionary that no one remembers. Santa Lechuga was a fiction I made up some years ago when I was writing a dumb column for The Herald. Fifteen years later, the only remnants of Santa Lechuga is in my personal email address and in a fantasy baseball league I administer with my brother called the Santa Lechuga Power League.

So on this day — Christmas Day — Fred had hoped that I would be able to open the shrine to Nuestra Señora de la Lechuga. He had constructed the shrine with his own hands, using a generic statue of a female saint and a bunch of plastic lettuce leaves. (Santa Lechuga translates stupidly to “Saint Lettuce.” And, yes, my Santa Lechuga columns were really stupid.) The shrine was supposed to be the Slam-Bam climax to the Advent Calendar adventure, to be opened on this sacred Christmas morning. Unfortunately, Fred was unable to figure out a way to pack such a fragile shrine in a box without breaking it or screwing up the plastic lettuce leaves.

That was his excuse, anyway. I think he really wanted to see the look on my face when he handed me the shrine that November day. 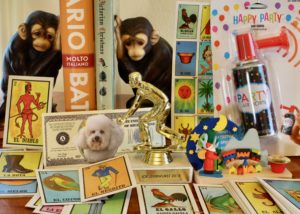 A few of the 25 Days of Christmas

Nuestra Señora de la Lechuga is one of the most beautiful gifts I’ve ever received and it will always occupy a special place in the Livernois household. I’m not so sure about everything else — the 25 days of airhorns and monkey bookends. Oh yeah, and the bocce ball trophy, engraved “Joe Liverwurst.”

Except there’s this: Every single gift — even the weird off-kilter gifts — is special because there was so much love packed into every one of them.

Fred has spent the past year focused on us, finding stuff for us, taking the extra step for us, laughing over the stuff he found for us, wrapping them tightly for us, burning through Scotch tape for us, fussing over it all for us. And every day this month. I know he wakes up with his coffee, and he checks his list so he’ll know what we’ll be opening that day, giggling sometimes about how silly he can be but always hoping that we will appreciate his gift and that we’ll know that we are loved.

Fred made us feel special this Christmas season. You can’t really know what that is like until it happens to you.