An ambitious new housing proposal that would encourage new investment in affordable homes in California has grabbed national attention — and the bill’s champion was the keynote speaker last month for a housing conference on the Central Coast.

Sen. Scott Wiener, D-San Francisco, unveiled the sweeping legislation, which would seek to add millions of new housing units in the state within the next decade, last week. The proposal, S.B. 50, is an updated version of Wiener’s S.B. 827, which failed to win legislative approval last year.

The bill would loosen up controls and regulations on development, and would encourage higher-density housing in urban centers throughout the state. Wiener’s plan has been embraced by affordable housing advocates. But other Democratic senators, worried that Wiener’s proposal is a one-size-fits-all approach to housing, have introduced their own bills with similar goals but which they say allows cities to retain some control.

“There is a 3.5 million home deficit in California,” said Wiener during his appearance at the annual conference of the Monterey Bay Economic Partnership in Seaside last month. “California is in a deep hole and we are seeing more and more of the consequences.”

In brief, Wiener’s bill would:

The Monterey Bay Economic Partnership was established three years ago as a regional organization to encourage cooperation among public and private organizations to resolve issues of mutual concern in Monterey, Santa Cruz and San Benito counties. Affordable housing appears to be a high priority with the group.

Wiener told the group that regional cooperation is a key to resolving the housing crisis in California. “We started to do things a certain way in California and it doesn’t work anymore,” he said.

The Monterey County grand jury last year encouraged a similar tactic. In its investigation on homelessness in the region, the grand jury recommended that Monterey County government enter into a “binding, enforceable agreement” with its cities to plan for more affordable housing.

The Monterey Bay Economic Partnership conference addressed several other topics. Kathleen Crocetti, an artist from Santa Cruz, attended the conference. She took “visual notes” of the meeting, which she is sharing with Voices. 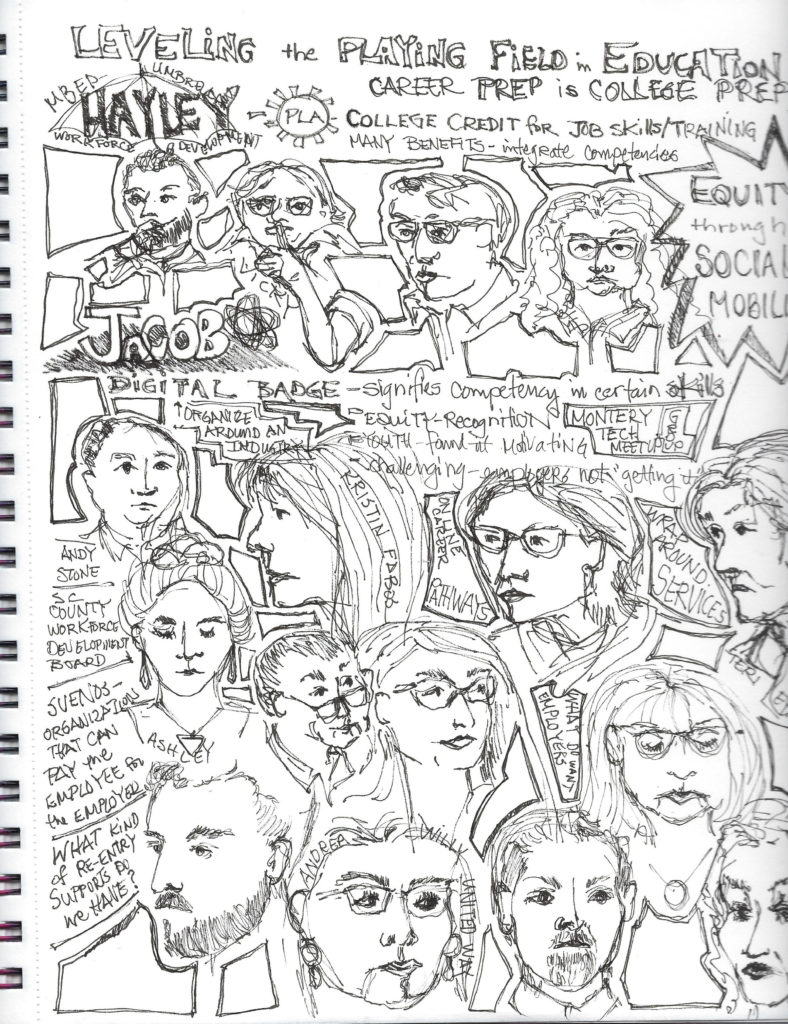 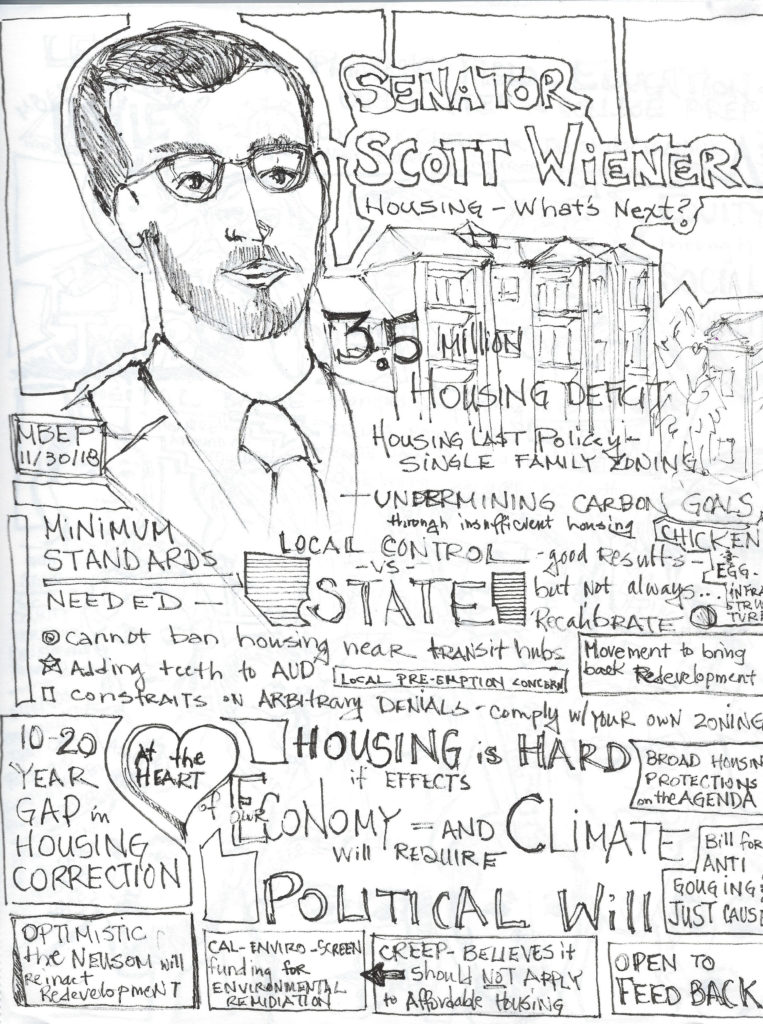 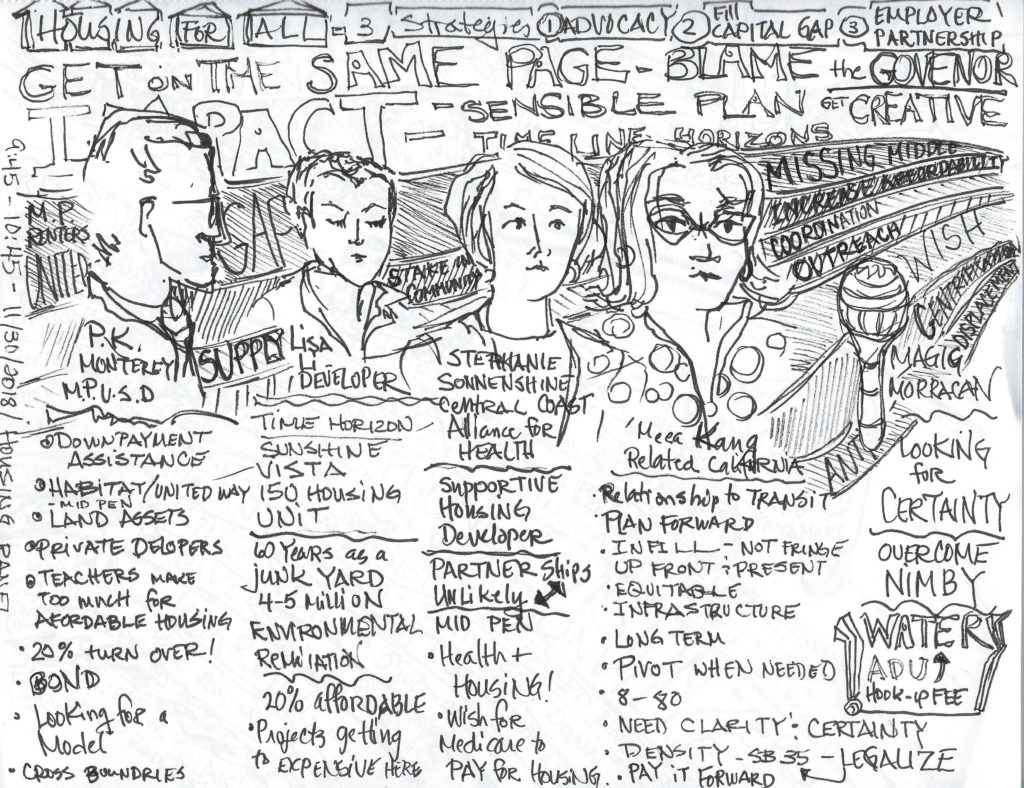 Kathleen Crocetti began her career as an artist in 1984. In 1988 after moving to Pacific Grove she became the youngest member of the Carmel Art Association. Kathleen is both a Middle School art teacher and a well established public artist. Her latest public art work "Celebrating the Diversity of Labor" was commissioned by the City of Watsonville where Kathleen has resided since 2000. Her newest ambition is cover the downtown Civic Parking structure with mosaics and to open a free after school arts center so teens and the larger community of Watsonville can create this monumental work together.