Story and photos by Joe Livernois

There was John Mescall, coming down the mountain on his bicycle. He grasped his cello for dear life. He had already dropped it once, in town, during his panic to escape the inferno. The cello has been banged around since it was made in 1892 in England, and certainly since Mescall first got it in 1972. It was worth saving. It has been such a part of his life.

Crimson peril illumined the wall of thick dark smoke behind him.

In town Mescall was known as the guy on the bike who lugged firewood around. Some knew him as the Guy with the Wood and he was also known as “Stick Man.” He was the sort of presence that lends character to small towns like Paradise. He may have been Stick Man in Paradise, but the community of musicians in Northern California knows him as “Cello John,” principal cellist for the Paradise Symphony Orchestra.

“He’s one of the most loveable people you’ll ever meet,” said Lloyd Roby, the conductor. “It’s always surprising to me that he’s not playing professionally somewhere for some big orchestra, with his talent, his love of music and his ability to get along with others. But it’s a blessing to us that he is in Paradise.”

Paradise is in ashes now, victim to the Camp Fire. The orchestra’s musicians are scattered. Like Mescall, many of them lost their homes. Mescall believes all his fellow musicians are accounted for and are alive. Another bit of good news: the orchestra’s home, the Paradise Performing Arts Center, is still standing.

But the cello sustained a crack when he dropped it, and there’s now something wrong with the way the strings are spaced from the neck and the bridge. He’ll get that fixed. It’s on his list of things to do. It still sounds good, but it’s a bit more difficult to finger the strings. 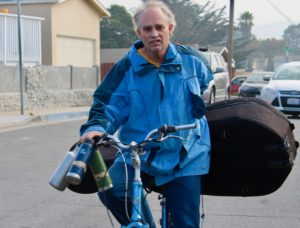 Mescall with his bike and cello

Mescall, 61, has found refuge in Seaside, in his mother’s home. His mother, Sally Mescall, also has a house in Paradise. Had a house, that is. It too was lost.

Eight days later, Mescall sat in the front yard of the Seaside house and told his story, the story of his career and the saga of his escape from the deadliest fire in California history. The numbers of the dead and missing continue to climb. As of Sunday, Cal Fire reported 76 deaths, 9,700 homes destroyed and almost 150,000 acres burned.

Mescall lost virtually everything he had in Paradise, except for one of his bikes and the cello. His music is gone, including his collection of albums and CDs of a lot of the music he wrote and self-recorded. His little two-bedroom home on a wooded lot on Maple Park Drive is gone.

'I was being fatalistic.'

But mostly he aches for his cat. The cat’s name is Greystoke, or Greystroke when Mescall pets it.

He struggled to say what happened to the cat. He had placed Greystoke in its cage, was trying to get the cage on the bike when the door flew open and Greystoke ran under the house. Mescall couldn’t catch Greystoke and the fire was closing in. “And I was being fatalistic,” he said. The loss of Greystoke haunts him; he spends a lot of time lately contacting animal shelters around Northern California that are taking in animals rescued from the fire.

“He keeps blaming himself for things,” said his mother. “But he shouldn’t.”

The fire was coming at him and decisions had to be made. Mescall swept pine needles from his mother’s home, then pedaled to his own house to do the same. But embers were igniting homes around him. He knew he had to get out fast. “It was like a disaster movie,” he said.

He took his bike to the city’s recreation center, where the cello was stored. The place was locked, but he was desperate. He broke a window and let himself in. “I’m not the sort of person who would do something like that,” he said. “I have respect for property. But there comes a time …”

He retrieved his cello.

“It’s the most valuable thing I have,” he said. “It’s my livelihood.”

For some reason, he also had three metal water bottles with him and he didn’t want to part with them. He held the cello on one arm, the metal bottles and the handlebar in the other hand. Buildings around him were burning. Panicked drivers were stuck in the gridlock. His own car was parked in a spot that would have made it difficult for escape. He saw so many extraordinary things. He had lived in Paradise more than 15 years, and now he watched familiar landmarks go up in flames.

So he kept pedalling. Down the hill, toward Chico. It was an awkward journey with the cello, cumbersome and bulky. The three water bottles didn’t help, but he never thought about dumping them. The distance between Paradise and Chico is 22 miles, but at least it was all downhill. It was dark in the middle of the day. 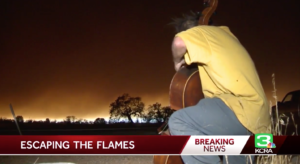 At some point, he stopped along the side of the road, where several television news trucks were parked. A reporter asked him what he was doing and he told her. The reporter, from KCRA-TV news in Sacramento, interviewed him. He pulled out his cracked cello and played for the camera. The clip has been shown on local news in stations around the country that have affiliate arrangements with KCRA.

“I felt like Nero, playing the big fiddle,” he said.

He eventually made it to Chico, where he spent the night at a disaster center set up at a neighborhood church. He ran into a friend there, another musician named Chuck, who wanted to get to Roseville but who didn’t know the way. Mescall was familiar with Roseville, so he rode with him, showed him the back roads since Highway 99 was still closed. He called his mother, who picked him up in Roseville and brought him to Seaside.

Mescall has lived in Paradise since 2002. Born in Sacramento to a musical family, he spent many years in Europe. England, mostly. He took up the cello at 8. A teacher at the Royal Academy in London had found the cello for him in 1972. Mescall has had it ever since. He said it is 126 years old, but it doesn’t look a day over 125. He played in different orchestras in England and Germany — he even did some time with a punk band in Europe. But he was more into sports, British football, and wasn’t really serious about music. He thought he might be a sportswriter for a while. Then he went off to business school, but that didn’t work out either. In the late 1980s, he became more committed to music. “I thought, as long as I have the cello, I may as well use it,” he said. 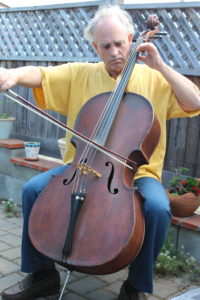 Mescall and his cello in Seaside

He moved to Paradise in 2002 because it seemed like a safe and quiet place. He joined the Paradise Symphony Orchestra and it’s been his home ever since. His mother bought her house up there in 2009, and she divided her time between there and Seaside. Sally Mescall said she is still sorting through her belongings in Seaside, taking stock of what she has and what she has lost.

Mescall is wistful about the orchestra. Its last performance, on Oct. 28, had been so wonderful, he said. A native of Paradise, violinist Dawn Harms, was a guest performer. And the musicians were charged up about the holiday, about a three-day run of the The Nutcracker in December. Rehearsals had already started. The orchestra is celebrating its 60th anniversary this year.

Roby, the conductor, said that at least 28 families in the orchestra have been impacted by the fire. But everyone is alive, and the hall is still standing.

The entire orchestra had been excited about the collaboration with Northern California Ballet for The Nutcracker. This was going to be a first for the two organizations.

Roby said that everyone is in agreement. The show will go on, despite the tragedy. “It will be delayed about a month,” he said. “The ballet wants to go ahead with it and the orchestra is on board.” The Nutcracker will be staged in Paradise — several weeks after Christmas.

Back in Seaside Mescall has a need to demonstrate for me what the escape was like. On Saturday he was wearing the same waterproof jacket he wore that day in Paradise. On the narrow street in front of his mother’s house in Seaside, he demonstrated how he carried the cello and the three water bottles on his bike.

The conversation often returns to Greystoke. The cat just sort of showed up at his home three years ago, the way cats do, and they made a connection. He asked me to “put out an APB” for Greystoke, an all-points bulletin. He hopes his story will be picked up by the Associated Press so that people will be on the lookout for Greystoke.

He said he doesn’t know what’s next, where he’ll end up. He will be living with his mother now, and he said it’s a good thing they get along. He and his mother already have their claims submitted to FEMA, but rebuilding will be long and difficult. Over the years, he’s performed at a Christmas service at an Adventist church in Red Bluff, and he’d like to keep that tradition going. Otherwise, everything is a question.

On Sunday, one of his mother’s Seaside neighbors invited him to join the band at a gospel church in Seaside. He said it felt good to play in front of people.  On Monday he attended a rehearsal with the MPC String Chamber Orchestra, and a member of that orchestra — another cellist — will give him a tuxedo Mescall can wear if he joins the group for its next performance on Dec. 3, according to Pat Dally, a family friend. Mescall said he has performed off and on at different churches around Northern California over the years. He’s not really a solo act — “I’m not Yo-Yo Ma,” he said — but he collaborates well with others.

One of those collaborations, with a friend named Mark Handshuh, who goes by Rising Star, resulted in a composition Mescall has been holding on to for years. It was created in 2005. It’s about 30 minutes long, and Handshuh’s electronic accompaniment to Mescall’s bold cello make it an engaging work. For a long time, Mescall referred to it as “Shasta Meditation.” A CD recording of it survived the fire, one of the few that did, but Mescall has changed the title.

Listen to Paradise Lost, by John Mescall and Rising Star.

Editor’s note: Mescall said he learned Monday that a dead cat was found on his property. Also, this story has been updated to include comments from Lloyd Roby.

Have something to say about this story? Send us a letter or comment below.