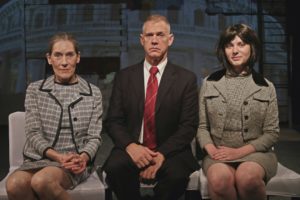 Pacific Repertory Theatre (PacRep) continues its exploration of Shakespeare’s Roman plays with a new and relevant adaptation of Coriolanus. This powerful commentary on class politics and the nature of patriotism is a timely political piece that deals with the violent and messy beginnings of democracy of that time. Directed by Ken Kelleher, Coriolanus will preview Friday October 19th at 7:30 pm and will run Thursday, Friday, Saturday evenings, and through Sunday matinees at 2:00pm thru November 4th.

Caius Martius Coriolanus is a fearless soldier but a reluctant leader. His ambitious mother attempts to carve him a path to power yet he struggles to change his nature and do what is required to achieve greatness. Now he must decide who he really is and where his allegiances lie in a new city state struggling to find its feet, where the gap between rich and poor widens every day.

General admission ticket prices range from $8 to $38, with discounts available for children, students over 18, teachers, seniors over 65, and active military.

Tickets are available online at: www.pacrep.org, or by calling (831) 622-0100, or by visiting the PacRep Box Office at the Golden Bough Playhouse, located on Monte Verde between 8th and 9th, in Carmel.