Story and photos by Kyle Martin

Mary Beeson remembers when the section of San Lorenzo River beneath Highway 1 was a homeless encampment. That was two years ago, and it isn’t that way anymore. Still, signs of activity litter the stretch of the levee. Beeson becomes more familiar with that section of real estate every day, with each piece of trash and with every syringe she picks up.

She also has a clear idea about what needs to be done to resolve the issue of homelessness in Santa Cruz County. “The homeless situation will not be solved until the homeless become part of the solution,” Beeson said. “These people need to see someone that is homeless (and) functioning.”

Beeson, 73, spends her days patrolling the levee.  Thinly framed and agile, she moves with purpose — though she often stops to identify a hawk flying overhead, or turtles swimming beneath the lotus flowers in the pond in San Lorenzo Park. She admittedly sees her age as an advantage in her work. 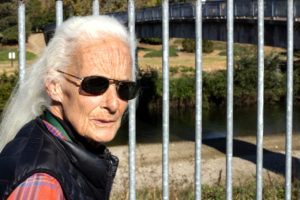 “I’m not afraid of them,” she said of homeless people. Beeson, with snow-white hair and a stern demeanor, most often meets younger people on the streets. She says her age makes her seem “non-threatening.”

Wearing jet black wire-framed sunglasses and thick, rubber-soled boots, she tracks well over a mile on the route. Her white canvas shoulder bag is a clue from her past; it reads “Buy Fresh, Buy Local/Southern California.” It holds her secrets — like an empty red plastic toothbrush holder she keeps with her to safely dispose of biohazardous materials. It can fit up to three syringes, she said.

“I don’t think we ask enough of the homeless,” she said. The heart of the problem, she says, is that “we have to get the homeless involved.”

In the patches of dirt and grass where she searches for garbage to pick up — beside Highway 1 and along the riverwalk — Beeson also looks for homeless people. She tries to give them information on where to find helpful programs, tells them where they might be able to safely sleep for the night and, if she catches word of it, when the city might be planning a sweep of the area.

She’ll spend a few hours every week lending her phone to people in need at the Santa Cruz Public Library. She tries to help the homeless who are asked to leave the library — or who get kicked out — for violating one of the library’s code of conduct. And she’ll often go to City Council meetings, though she’s been avoiding those lately because, she admits with a smile, she tends to “advocate loudly.”

And when she’s done with her work at the levee and the library and with the Downtown Streets Team, a local homeless advocacy organization with which she is a team leader, she’ll go home to her shelter, provided by Association of Faith Communities Santa Cruz.

Beeson herself is homeless in Santa Cruz, and has been for a couple years now. And she’s trying to change public perception of homeless people in Santa Cruz. It’s a challenge she finds fulfilling. “I think I’m probably happier than I’ve been in years,” she said.

She’s happy cleaning the river, she’s happy advocating for homeless people, and she’s happy even though she’s homeless. Her message to the community is that even though people are homeless, they are still human.

Beeson describes herself as “a busy person.” She’s got a lot going on, things that people who might judge her don’t see. In fact, she has a whole river to look after.  “Nothing is going to get in my river,” Beeson said. “I don’t want anything in my river that was not made by Mother Earth.”

It’s perhaps that reason that she’s a team leader for the Downtown Streets Team, a nonprofit organization with teams operating throughout California whose mission is to empower homeless residents into advocating for and housing themselves. They offer programs which offer non-cash assistance with housing, employment and case management, along with other services. Their model of self-help has been at work in Santa Cruz since July 2017.

“All of our work with our team members and their transformation from a marginalized person to a productive member of our community happens in front of everybody,” said Chris Richardson, chief programs officer for the Streets Team.

With each case of success, the Streets Team hopes that community members will see the environmental and economic effects of including homeless people in the solution to the homeless crisis. Their goals include fostering a “community of accountability, support, dignity, motivation and hope” among people experiencing homelessness in Santa Cruz.

“What’s really important is folks rebuilding their dignity,” Richardson said. “We’ve seen that once someone feels good about themselves, they really have a much better chance of getting out of homelessness.”

Which is why, he said, it’s been quite helpful to have someone like Beeson at the helm of a project like cleaning the levee. 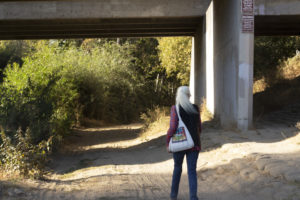 “Mary’s been great,” Richardson said. “Winning her over was a big deal for us because she’s a huge skeptic.”

No matter what, no single organization or group can end homelessness on their own.

“This problem isn’t going away. You can’t just stop providing services and expect the problem to go away. It’s going to get worse and worse unless we start providing more services to more folks,” Richardson said. “The good news is that it’s gotten so bad that everybody is realizing that they can’t just push the problem to the next city down the road, and they’ve got to do something about it . . . It is top of mind for absolutely everybody.”

The problem is systemic, so it will take a change to the system to resolve the housing issue, he said.

“I think my point is it’s not going away. It really is going to take a village,” Richardson said. “That doesn’t necessarily mean donating or volunteering. It means for folks to really take a dive and really try to understand.”

‘Think about what it might take for you to become homeless,” said Evan Morrison, veterans outreach specialist for Santa Cruz’s Homeless Services Center. “There are thousands of people who have gone through that trauma.”

There were more than 2,200 people homeless in Santa Cruz, according to a census conducted by Applied Survey Research. Of those thousands of homeless people, 80 percent were said to be unsheltered. Almost 600 of those counted were either unaccompanied minors or transition-age youth, nearly all of whom were noted to be unsheltered. ASR also reported 2,837 homeless people in Monterey County in Feb. 2017, with 74-percent of those survey identifying as unsheltered.

Regarding Santa Cruz County, Morrison said that “every program in the county is full all the time.” He added the “big blaring thing” in front of everyone’s faces is that “there’s just not enough places for people to live in this county.”

Morrison works throughout Santa Cruz County, in Santa Cruz and Watsonville, and he says the issue “is something that’s region-wide, that’s bigger than Santa Cruz.”

The facilities of the Homeless Services Center can accommodate about 200 people, both families and individuals. Stagg estimates that more than 2,000 people per year use the services of HSC, which includes people who just stop by to shower or use the bathroom.

“When you add it up, it doesn’t really come close to meeting the need,” Morrison said because “in Santa Cruz, I can walk in any direction and find a homeless person.”

And the lack of access especially makes it hard when there is pushback from locals who don’t want programs or shelters near their neighborhood.

‘Not in my community’

‘People are really resistant to being part of the solution, and perhaps people don’t see the importance of their role,” said Rayne Marr, homeless services coordinator for Santa Cruz County. “The community needs to recognize their role in making it possible.”

Marr said she gets frustrated when community members in wide numbers — “with their uncle” — show up before the City Council to oppose the placement of a homeless shelter in their area.

“I do a lot of work in planning and trying to fight for services, and it’s pushback from every direction that’s hard,” she said. “I can have all the money in the world, and I can have the best programs in the world, but [without support] it just can’t be done.”

It’s the “not in my community” attitude that Marr said helps perpetuate the issue of homelessness in Santa Cruz County.

“We are at an unprecedented moment in time,” Marr said. “What I hope is that across this entire county, it will be possible for community members to embrace the idea that shelter is a necessity, and it needs to be distributed throughout this community.”

Marr said the county is expected to receive about $10 million in state grant funding sometime next year with the passage of SB2 — which is said to generate billions in revenue for affordable housing project in the next five years — as well as another $2.2 million from the Department of Housing and Urban Development to specifically fight against youth homelessness.

“It’s a bitter pill to swallow, and yet if we don’t do something, nothing is going to change,” Marr said. “I’m just worried that we’re going to be stuck in that endless cycle.”

The Santa Cruz City attorney is reportedly looking into the implications of a court ruling from earlier this month in the U.S. 9th Circuit of Appeals which determined that prosecuting homeless people for camping in public while shelters are full is unconstitutional, according to the Santa Cruz Sentinel.

While the city determines what that ruling means in the city, thousands of homeless people roam the streets every day.

Meanwhile, Beeson said she will continue to patrol the San Lorenzo River, cleaning and advocating — even after she finds a permanent place to live.

Kyle Martin is Fil-Am multimedia journalist born in San Jose, CA who grew up mostly in North Texas around Dallas. After driving his 2005 Jeep Grand Cherokee alone cross-country, through the circles of Hell known as the Texas Panhandle and the bottom half of Wyoming, he is now based in the Bay Area. He has experience writing and photographing in Texas, California and elsewhere. Send news tips and restaurant recommendations to kylemartinmedia@gmail.com.