Journalist Royal Calkins and a band of open-government proponents in Carmel had their day in court on Friday, Sept. 7. They made the case that documents that purportedly back up claims made by the Carmel city attorney on his résumé should be made public.

Carmel’s assistant city attorney, Jon Giffen, argued to Superior Court Judge Robert O’Farrell that the documents were shown to the City Council in a closed session, while considering the employment of Glen Mozingo as a contracted city attorney. And Giffen argued that the documents should not be released because of employee-privacy exemptions to the Public Records Act.

After hearing arguments, O’Farrell said he would likely issue a decision on the case soon, adding that he has “obvious feelings” about the litigation. During the 30-minute discussion in court Friday morning, O’Farrell seemed to challenge most of Giffen’s assertions.

Calkins, a columnist for Voices of Monterey Bay, filed a petition seeking a court order to make those materials public in July. Calkins and attorney Neil L. Shapiro, representing Voices and a Carmel group called Transparency in Government, filed the petition after Voices published articles written by Calkins that questioned key assertions in Mozingo’s résumé.

After the articles appeared, Mozingo apparently provided the council with explanatory materials in a closed-door meeting in June. The council later announced that it had fully exonerated him based on that information, but it denied requests from Calkins and others to make those materials public.

In that résumé, Mozingo claimed to have had significant experience representing several Southern California cities on various matters of municipal law. The longtime city attorney of one of those cities, Escondido, flatly disputed Mozingo’s account of work there, however, and attempts to verify his work for other cities, including Los Angeles and San Diego, proved fruitless. He claimed in the résumé to have been the lead lawyer for a Sacramento County fire district although his law partner at the time says that isn’t so. Among other questionable items on the résumé, Mozingo, 71, also claimed that he had won a Congressional Gold Medal.

'A sad attempt to deflect … attention from the reality that Carmel lacks legal or logical support for its refusal to disclose public records.'

After the filing of the lawsuit — Royal Calkins v. City of Carmel-by-the-Sea — the legal banter and declarations took a bizarre twist when the city responded in Trump-like fashion, declaring in a legal response that Calkins is a “failed journalist” and a “documentable liar.” Calkins, a former editor at the Monterey County Herald, has been an investigative reporter and community journalist in a career that spans more than four decades. In a formal response to the court, Calkins said the city’s claim is a “sad attempt to deflect … attention from the reality that respondent City of Carmel-by-the-Sea lacks legal or logical support for its refusal to disclose public records.”

Last month, the City Council on a 4-1 vote awarded a five-year contract to Mozingo over the objections of several residents, including former mayors Sue McCloud and Ken White. The opposition argued that the council seemingly rushed into the contract, should spend more time considering the ramifications and should wait until a ruling in Calkins’ public records lawsuit.

In court on Friday, Giffen avoided personal attacks but claimed that the materials Calkins sought were “private” documents belonging to Mozingo. Because they were presented to the City Council during a Brown Act-sanctioned closed meeting, Giffen said, they are not subject to public inspection and their release would constitute an invasion of Mozingo’s privacy. Forcing Mozingo to make public the material shown to the council in a closed session would “blow a hole completely” in Brown Act provisions that protect city employees.

But O’Farrell noted that the materials presented were “basic documents” — like college degrees and the certificate Mozingo would have received for winning a Congressional Gold Medal. “They were documents to back up claims on a résumé,” O’Farrell said.

“What is private about a college diploma?” asked Shapiro. “The burden of proof is on the city … and the city has not met that burden.”

Shapiro cited state law that defines a public record as “any writing containing information relating to the conduct of the public’s business.” Said Shapiro: “There can be no dispute that the items brought to the council meeting on June 4, 2018, and retrieved by Mr. Mozingo at the meetings were ‘used’ by the city” to validate Mozingo’s résumé.

Shapiro added that, under the city’s argument, any government agency could hide relevant documents for any public matter by introducing them into closed-door meetings under the Brown Act.

Attending the hearing Friday morning were Mozingo and Deputy City Attorney Gerard Rose and City Councilwoman Jan Reimers. About a dozen city residents were also in attendance to support Calkins. The case had originally been assigned to Judge Marla Anderson, but O’Farrell took the case in Anderson’s absence. O’Farrell is retired, but occasionally fills in on the bench when current jurists are on vacation or on leave.

Click here to read some of the columns and stories by Royal Calkins about the intrigue in Carmel. 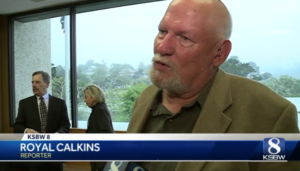 3 thoughts on “Carmel defends its city attorney In Royal Calkins v. City of Carmel by-the-Sea, a dispute over public records”