I’ve had daydreams – fantasies, really – about Donald Trump showing up on my front porch as part of his mission to get to know the people better. But before he can get a word out, I’m bopping him alongside the head, creating a cloud of Cheeto dust, and I’m pushing him down the steps, kicking his butt as he scrambles toward the gate.

In my head, I’m making a speech of sorts, telling him what a dirtbag he is and how he is ruining the country and saying I hope he goes to jail or something worse. I’m messing up his hair and chucking rocks at him as he makes a dash for the limo. As the fat black car rolls away, each rock connects with a loud and satisfying thump.

It comes to mind because of the recent rash of normal people coming in contact with high-ranking federal officials infected with the Trump virus and turning it into a made-for-Facebook event.

There was the woman who heads the Department of Homeland Security, Kirstjen Nielsen, being heckled right out of a Mexican restaurant, and then Sarah Sanders, the least effective press secretary of our time, being asked to leave a cozy diner in the Virginia countryside. Apparently Trump’s German-language instructor, Stephen Miller, also got himself yelled at while savoring the flan at another restaurant with south of the border flavor.

And then there was Congresswoman Maxine Waters waving her arms around and encouraging folks to continue getting in the face of the Trumpistas in the hope that it will turn them into better people. 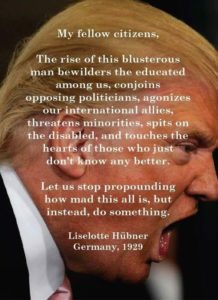 Enough already. We’re acting like them. It’s not that I feel sorry for Sanders or Nielsen or Miller. If I was dining in a table near any of them, I’d be tempted to send over a slice of moose turd pie with my compliments. But I believe that those of us who are better than them would be making a big mistake by continuing to correct the administration’s abhorrent behavior by acting like the awful people we’re trying to correct. They are the assholes, not us.

The level of anger, of hate, may have reached an all-time high in this country. If it was worse sometime in the past, I don’t want to know about it. Insults and anger spawn nothing more than insults and anger. The Trump presidency has brought out the worst in everyone.

What I’d much rather see is that we take the energy that goes into ranting and raving and put it into meaningful, measurable protest. Civil disobedience. Boycotts. Any type of mass actions. I can’t believe most of us are still paying our taxes. Now we’ve got the travel ban staring us in the face again. Will we finally be moved to do something rather than sigh?

Think marches and rallies are pointless? It does feel that way sometimes. But when a sizable percentage of the U.S. population started turning out for marches protesting the war in Vietnam, peace soon followed.

In the months after Trump’s election, I was fortified by the size of the women’s marches around the country, around the world, and by all the indivisible groups and the like, groups that have since become more like invisible. I thought we had a chance of driving the new administration underground. Exiled to Paraguay or somewhere.

But the early efforts didn’t last, and now Trump and his minions have been locking up children. And what have we done about it? We have responded with Facebook posts, a few phone calls to our congressional representatives, and a few letters to the editor. We have responded by reposting videos. Boy, that must make the goons tremble.

As weak as that is, it has worked a tiny little bit. On the subject of babies in cages, President Dumbo caved to a degree, making himself look even more foolish than usual, but there are ominous signs that we are missing other equally devilish elements of his border policy. And we haven’t corrected his behavior.

True, instead of writing about this, I should be out there organizing marches on federal offices, human blockades around Border Patrol stations, tax protests, boycotts of every Koch Brothers-affiliated company. I have learned over the years, however, that I can barely keep my closet organized much less organize a meaningful protest. I’m an observer, not an operator. If I try to lead, we’ll wander the desert in circles.

This is where you come in. Rather than tweeting about how upset you are, how about you and a few of your best friends organizing a rally or a march. I’ll show up with some friends. I’ll bring napkins and ice.

Think marches and rallies are pointless? It does feel that way sometimes. But when a sizable percentage of the U.S. population started turning out for marches protesting the war in Vietnam, peace soon followed.

Maybe someone can think of a way to tie this in with the World Cup. Mexico’s won a couple of contests so far. If we could tap into the energy of the Mexican soccer fans, we’d have Trump looking for his own form of asylum.

Sitting around waiting for opportunities to get in Ivanka’s face or a chance to throw a pie at Rudy will accomplish nothing. None of it will cause any of Trump’s empty-headed supporters to see the light. We need to get off our butts and do something to stop the horrible things that Trump is doing.  Making a few bureaucrats uncomfortable over dessert isn’t going to return sanity to our borders.

There have been some local efforts. There was a sit-in outside the local GOP offices the other day, I understand. Apparently it didn’t make much of a splash. So I say let’s do it again, but bigger and louder and longer this time.  And when I say let’s do this, I mean let’s you do this. I’ll be here thinking what I’ll do if Trump knocks on my door again.

FREELOADERS IN THE WORKPLACE

In yet another ruling in line with Trump’s worldview, the Supreme Court this week said public employee unions can’t require non-members to help pay the cost of representing their interests at the bargaining table.

It took me back to my days as chairman of the Newspaper Guild unit at the Fresno Bee. Most of the newsroom employees chose to join our union but a few cheapskates declined. The managers privately expressed surprise that it was the stronger employees who chose to join up and the weaker folks who chose not to pay. What they didn’t understand was that the stronger employees were also the smarter ones who understood the value of union representation.

On several occasions, I had to represent employees who had run afoul of the rules and needed help protecting themselves from discipline, “up to and including termination.” In each case, the employee needing the union’s help was a freeloader. We represented them and represented them well. A couple fellows lost their jobs anyway but we saved a few others. A couple of them went on to join the union but a few chose to go on being stupid.

5 thoughts on “The Partisan: Ending the Trump nightmare requires more than tweeting”