Walk into just about any grocery store this week, and you will be besieged by beautiful flowers — roses, carnations, lilies and more — waiting in buckets, bundled into bouquets, a profusion of red and pink tied up with Valentine’s hearts and red ribbon, just down the aisle from soup on sale.

More cut flowers are being sold in the United States than ever before, but about 80 percent of them come from somewhere else. Buying a bouquet of cheap hybrid tea roses imported from Colombia has become standard operating procedure for Valentine’s Day and other occasions — it’s not hard now to find a dozen red roses for $19.99, thanks to the lower cost of production in that country.

During the past 25 years, the proliferation of inexpensive flowers and their placement at supermarkets and big box stores has disrupted two separate but related industries around the Monterey Bay: independent florists and cut flower growers.

For rose and carnation growers — once a substantial part of the agriculture scene in Watsonville and Salinas — the competition has driven many of them out of business. The increase in those grab-and-go bouquets has hurt independent florists and floral designers, who have lost customers not only to other retail sources, but also to online vendors who do not have the expenses of a brick-and-mortar shop.

Like so many other small businesses, florists — once a mainstay on every town’s Main Street — have been between a rock and a hard place the past few decades. With Internet vendors on one side and giant retailers like Costco on the other, little room was left for florists like Lezlie Johnson of Monterey.

Johnson, a master floral designer who has been in the business since the 1970s, reminisces about all the flower shops she’s seen come and go over the years in her hometown of Santa Cruz. “It seems like the change has really accelerated in the past year,” said Johnson, who laments the difficulties in finding local flowers since so many growers have either gone out of business or aren’t selling to minor clients.

Finding suitable blooms to use has now become a weekly treasure hunt for Johnson, who has even cut plant material from friends’ yards to get what she needs. In previous times, she’d travel to the Pajaro Valley greenhouses to select just the right palette of flowers; now, all but a few of these growers are gone.

“We’ve lost 90 percent of our flower farms,” said Santa Cruz floral designer Teresa Sabankaya, who started her business in 1999 and, like Johnson, prides herself on using locally produced flowers. “Watsonville used to be the No. 1 carnation grower.” Now there’s only one left in all of California — Kitiyama Brothers of Watsonville, which at one time had more than 5 million square feet in roses, carnations and other flowers.

What hurt flower growers was the U.S. government's attempt to push Colombians away from cocaine production. Congress passed the Andean Trade Preference Act, which lifted the import tax on products from Colombia, Ecuador, Bolivia and Peru.

But even Kitiyama, one of the largest growers in the American cut flower industry, has had to adjust, according to Kasey Cronquist, CEO of the California Cut Flower Commission. The company has downsized, “and no longer grows one stem of roses,” Cronquist said, instead focusing on flowers that aren’t coming from South America, such as gardenias, gerberas and snapdragons.

The thing that hurt growers was the U.S. government trying its best to quash South American cocaine cartels in the early 1990s. According to a recent Washington Post story, President George H.W. Bush’s administration was attempting to push Colombians away from cocaine production and toward more legitimate products, and so Congress passed the Andean Trade Preference Act, which lifted the import tax on products from Colombia, Ecuador, Bolivia and Peru. That act was fortified by the passage in 2012 of the U.S. Colombia Trade Promotion Agreement. 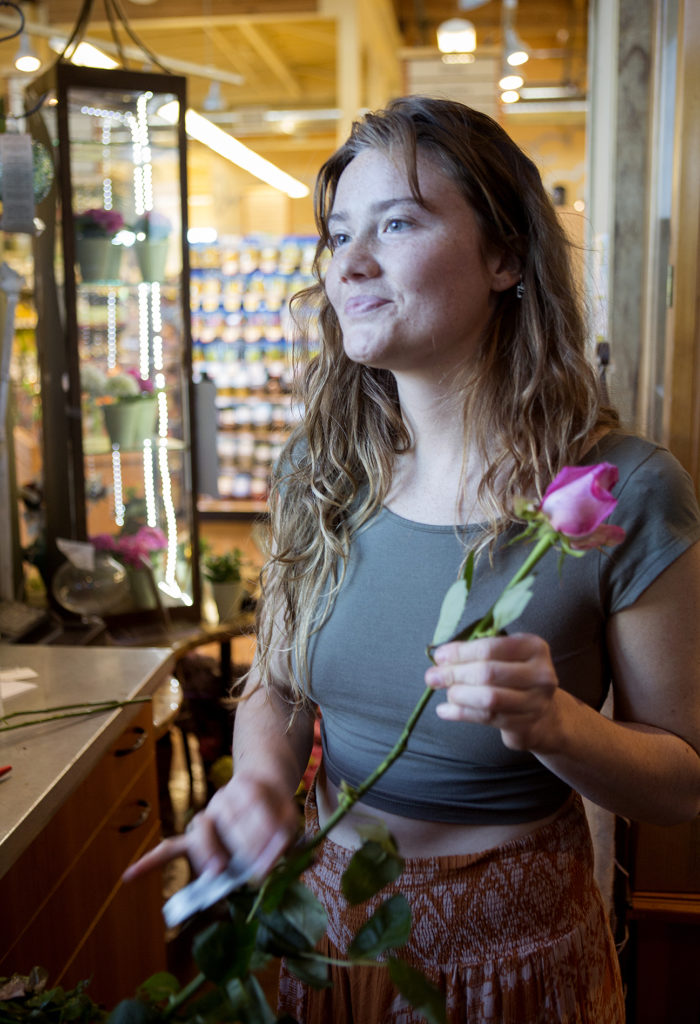 The good news: These acts did encourage numerous legal Colombian businesses. The bad news: Colombians got so good at growing cut flowers, and at a much lower cost, that it’s put many North American growers out of business. And in an Ironic twist, some local flower growers are now farming marijuana in their greenhouses, or renting their greenhouses out to cannabis growers, after their floral businesses took a tumble.

The flood of flowers from South America has made it possible to offer those $19.99 bouquets at the supermarket, and some grocery stores even offer full-fledged floral departments, further eroding the customer base that had previously used traditional florists.

Even flower shops inside grocery stores aren’t assured of turning a profit in the face of so much floral competition. Just ask Sabankaya, whose Bonny Doon Garden Company is nestled inside New Leaf Community Market in Santa Cruz, and whose work was featured in the landmark Amy Stewart book, Flower Confidential. She said she’s struggled at times to stay in business, especially during the 2008 recession and its aftermath.

“It’s hard to compete with FTD and Teleflora shops” that produce cookie-cutter arrangements that can be ordered online or by phone, she said. But Sabankaya has adapted with the times, offering customer service through her website and orders through BloomNation, an online marketplace where customers can order arrangements with a more artistic and unique style.

Sabankaya is upbeat, though, about the future of florists, pointing to the Slow Flowers effort, a mindfulness movement that emphasizes the use of sustainably and locally grown flowers, and which offers a website for customer searches as well as an annual summit for farmers and designers. Another encouraging development is a new business model, the farmer florist, who designs using what she’s growing in her yard.

Sabankaya is one of these — she grows her own flowers and herbs at her home in the Santa Cruz Mountains and uses these materials in her handcrafted bouquets — and another is Laura Vollset, who last year started clearing her property near Soquel to plant anemones, English roses, strawflower, foxglove and other old-fashioned favorites to use in her own floral work as well as to sell to other designers.

Standing next to twin rows of tutti frutti-toned Calibri poppies on her terraced acreage, Vollset pinches off blooms while talking. Originally a graphic designer and illustrator, she turned to gardening as an antidote to postpartum depression, and in flowers found her calling.

Apprenticeships at Scotts Valley’s Love Apple Farm and in the UC Santa Cruz eco-horticulture program emboldened Vollset and her husband to buy an acre and a half and dub it Fieldsketch Farm, where she’s now planting for the upcoming spring and summer months, and is planning to renovate an old horse barn as a venue for holding floral design classes and other events.

“It’s taken a while, but I’m starting to get some traction,” said Vollset, noting that her bridal and event clients have sought her out through the Slow Flowers website and word of mouth, because they want flowers that are local and sustainably raised.

Vollset adheres to organic principles, using ladybugs to control aphids and avoiding the planting of invasive species. “I want to keep things as healthy as I can, because my kids are growing up here.”

And that’s encouraging to Cronquist of the California Cut Flower Commission, who says that small farms have every chance of getting bigger. “Boutique farmers are boosting the number of producers,” he said, noting that flowers are one of the most valuable crops to grow on 10 acres or less. “But we really need more large farms to be able to compete on scale,” to be able to supply the flowers for those large retailers that sell grab-and-go bouquets. 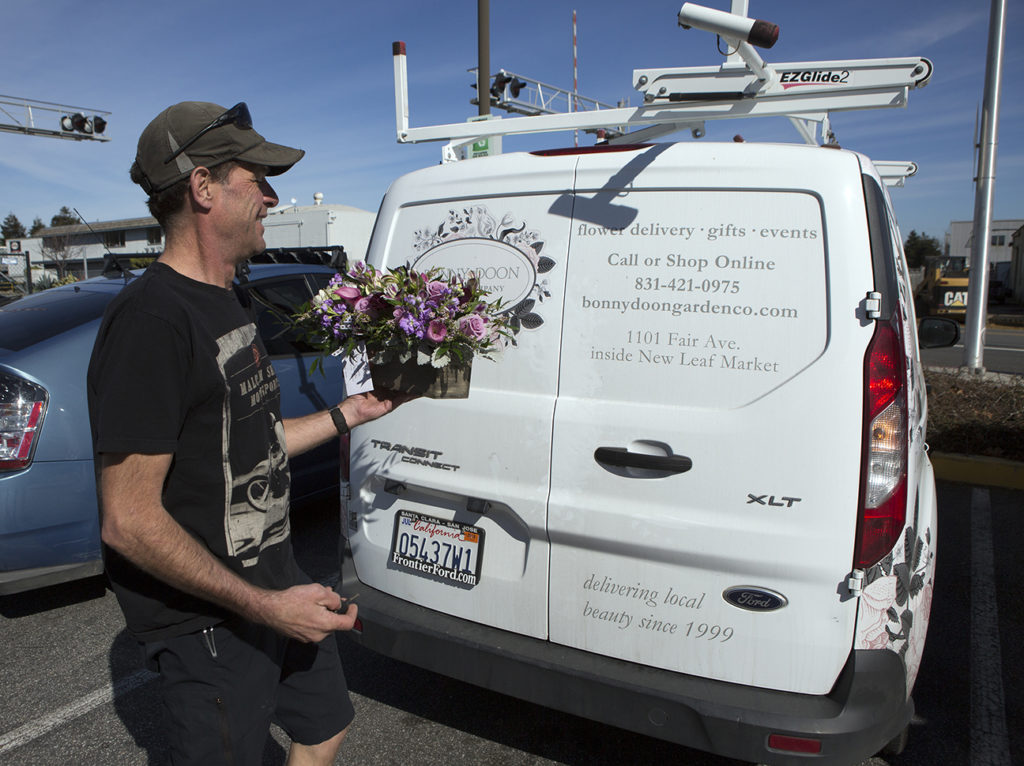 Boutique flower farms like Vollset’s are popping up throughout the area, with a commitment to growing more unusual items, and to grow them without harmful pesticides. Farms like CalCallas in Moss Landing and Wild Ridge Organics in Aromas offer freshly cut calla lilies and protea, respectively, and although the farms are small in scale, their flowers are sought after by designers seeking that certain something extra for their arrangements.

There’s also a concerted effort on to educate consumers called Certified American Grown Flowers, which is hosting events to get the word out and encouraging farms to become certified. A Field to Vase Dinner Tour shows off growers’ best each year, and in 2015 highlighted Monterey Bay flower growers, Cronquist said. Another event to better acquaint locals with their area flower farms is the Monterey Bay Greenhouse Growers Open House, now in its fourth year and scheduled for this June.

In addition to small startups, large flower growers who managed to downsize and hang on are now cautiously expanding once more, such as Kitiyama. But the industry has definitely changed, Cronquist said: “Growers are no longer growing carnations, (hybrid tea) roses or chrysanthemums. The decision was to switch crops or get out of the business.”

With more inventory available, and a sense that things are turning around, a whole host of new floral designers are making the leap of faith to brick-and-mortar stores, like Burst+Bloom in Carmel and La Bella Fiori in Capitola.

Another one is floral designer Kim England of Fleurs du Soleil, who opened her current shop 10 months ago in the old Myrick Photographic building in Monterey, and says it’s been a good move. “The response has been overwhelmingly positive,” she wrote in an email. “I love the community feel of our new location with one of the oldest neighborhoods in Monterey just behind us.”

England is aware of the realities of her business, but made the leap of faith to a bigger brick-and-mortar store, gambling on Monterey Peninsula customers wanting uniqueness rather than ubiquitiousness: “A floral shop is definitely affected in some ways by the big box stores and their bulk flower pricing. However, I feel we provide an entirely different style, quality and service than a Costco or Safeway.”

Despite the ups and downs of her profession, Lezlie Johnson said she really can’t imagine doing anything else. She’s lucky to have held on, most recently designing elaborate creations for AT&T Pebble Beach Pro-Am Golf Tournament events.

“Flowers are such an important symbol of life’s fleeting moments,” she said. “They make people happy. And that’s a really cool thing.”

A representative from the California Association of Flower Growers & Shippers of Capitola has responded with a letter to Voices and with a blog on the association site.