These days, saying that there’s a housing crisis in California’s Central Coast is like saying the polar caps are melting. Duh! But how did we get here and how bad is it?

Over the next few months, Voices will present a series of real estate-centric stories in a project called “Tales from the Housing Front.”

We launch this project with a mile-high view of the numbers and will grow to include stories — in their own words — from renters, homeowners, advocates, policy wonks and developers. If you have a housing story to tell and would like to participate in the project, email joe@vomb.org.

SOUNDTRACK | This Must be The Place by Talking Heads

Remember those thrilling days of the not-so-yesteryear, when regular working people on the Central Coast could afford to buy a decent house (or pay rent on a nice apartment), and still have a little leftover cash to buy food, keep up the car payment, not sweat medical bills and maybe even take a little family trip once a year?

One generation removed from that reality, and keeping a roof overhead (if a roof can even be found) is consistently one of the biggest stressors California residents face. Not enough affordable homes for sale and fierce competition for existing rentals have collided with a seeming inability to develop substantial affordable housing—and that’s made finding reasonable affordable housing unattainable for many.

Meanwhile, homelessness in Monterey County has increased 23 percent since 2015, according to the Coalition of Homeless Service Providers, which conducts an annual survey of known homeless encampments.

Let’s start with the numbers, first for homeowners and then for renters.

All five of the least affordable small housing markets in the United States are in California, and Salinas is at the very bottom of that list, according to the National Association of Home Builders/Wells Fargo Housing Opportunity Index (HOI).

The HOI receives data from CoreLogic, an Irvine-based analyst of financial, property and consumer information. The HOI is defined as the share of homes sold in a given area that would have been affordable to a family earning the local median income, based on standard mortgage underwriting criteria.

In Salinas, only 11.3 percent of new and existing homes are affordable to residents with the median family income of $63,100, according to the HOI released Nov. 9. The median home price in Salinas is $550,000.

Santa Cruz-Watsonville, meanwhile, ranks just slightly above Salinas in the least affordable rankings. In the second quarter of 2017, only 12.8 percent of new and existing homes were affordable to residents with the median family income of $83,300. The median home price there is $710,000.

We live with the reality, so most of us know how bad it is. But if you want a real gut punch, take a look at the Youngstown-Warren-Boardman metropolitan area of Ohio and Pennsylvania, where the median home price is $82,700 and 90.1 percent of all new and existing homes sold in the third quarter were affordable to families earning the median income of $54,600.

Here comes another freight train: the nationwide weather disasters of the past six months will lead to a spike in prices for building materials.

Back in California, nobody should count on prices or inventory to improve anytime soon. NAHB Chief Economist Robert Dietz says housing demand is on the rise, but tight inventory and a forecast of rising mortgage interest rates through next year will lessen housing affordability in the quarters ahead.

The state projects 180,000 units of new housing construction are needed annually over the next 10 years to meet growing demand, but production has remained below 100,000 units every year for the past eight. According to Gov. Jerry Brown’s budget summary for 2017-2018, that’s the lowest sustained permitting level since 1965. Between 2003-2014, only 47 percent of projected need was constructed, and not a single region built enough housing to meet identified needs.

Related: California Bills That Should Impact Affordable Housing For the Better

In Monterey and San Benito counties, only 9 percent of needed housing was constructed between 2003-2014, and the cost per affordable unit was $332,000.

If that $332,000 figure sounds high, that’s because it is. It’s a factor of labor costs, but also permitting and impact fees, delays in permit approvals, and parking requirements. The costs, according to Brown’s budget, can add tens of thousands of dollars to every unit.

And here comes another freight train: the nationwide weather disasters of the past six months will lead to a spike in prices for building materials, and a labor shortage, too, further hamstringing new development.

All of this also impacts the rental market, and here’s why. Just as affordable homes aren’t being developed, neither are affordable apartments. And when people can’t afford to buy, they rent. According to the Public Policy Institute of California, as of February 2015, approximately 48 percent of all renters in the state spend more than one-third of their household income on housing. That ratio—that amount of income spent on housing—is a phenomenon called “cost burdened.”

In 2016, 55.3 percent of Salinas renters were cost burdened, while 22.4 percent were “severely” cost burdened, meaning they spent 50 percent or more of their income on rent. 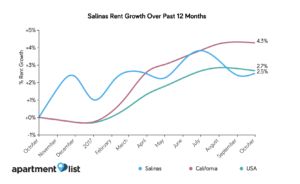 From 2005-2016, rents in Salinas increased 6.1 percent , and median rents there are less affordable than in comparable cities nationwide, according to data analysis from San Francisco-based Apartment List, which produces the “Rentonomics” newsletter.

Salinas’ median two-bedroom rent of $2,101 is well above the national average of $1,160. In the city of Monterey, meanwhile, a median one-bedroom rents for $1,410 and two bedrooms go for $1,760—and rents there have increased 5.4 percent over the past year.

Apartment List doesn’t yet have similar data for Santa Cruz, either city or county, although Apartment List senior research associate Sydney Bennet says they plan on having those numbers in the near future.

The Crisis in Santa Cruz

For a bead on the Santa Cruz-Watsonville rental market, we turned to California Rural Legal Assistance regional directing attorney Gretchen Regenhardt, who describes a rental market there as not unlike a Kafkaesque nightmare.

“There’s a crisis-proportion lack of affordable housing, and a lack of housing, period. The vacancy rate is zero, and what there is is so expensive that landlords are able to auction off and get the tenant who can pay the most.”

No single issue impacts every citizen as much as housing, and in California and on the Central Coast, that impact has been overwhelmingly negative.

It’s a factor, she says, of Santa Cruz being a great location, but its root goes back to a “historic resistance” to development dating to the 1980s.

“I think what happened is there had been a period of fairly laissez faire development, where ‘anything goes,’ nobody was paying much attention and zoning didn’t matter,” she says. “Then there was a huge backlash against that. In the name of environmentalism, there was a serious anti-growth movement.”

The county’s general plan land-use element was rewritten and for 25 years, Santa Cruz County didn’t have a housing element in compliance with state law. And that, Regenhardt says, is because “the county didn’t care.” 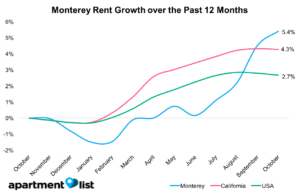 The rewriting of the housing element resulted in only eight acres being zoned for high-density development. She recalls her favorite horror story, in which a county-owned parcel in mid-Santa Cruz County was slated for 100 units of affordable housing.

As the proposal worked its way through the system, it became 65 units and 40 units and then…

“Ultimately,” she says, “it was a park. And it’s in an area that is pretty open space already.

“That’s the kind of thing that was happening. The county Board of Supervisors was killing anything that was proposed. I almost feel like it was part of a social compact.”

As for workforce housing, the needs never seem to get met.

Santa Cruz rent vs. income over the past five years

It’s not all dire, though. Regenhardt says the composition of the Board of Supervisors has changed and that one supervisor in particular, Zach Friend, is demonstrating a willingness to hold people’s feet to the fire over development, with a mindset of, “we’ve protected all this land and now we’re going to provide for the people who live here.”

“Whether that’s going to materialize, well, obviously everything is harder with the loss of redevelopment money,” she says. “Even with all the bills the governor has signed (see sidebar below) we do still consistently see proposed developments reduced in size regularly. Every time that happens, the inclusionary portion is also reduced.”

No single issue impacts every citizen as much as housing, and in California and on the Central Coast, that impact has been overwhelmingly negative. It’s part market forces, part legislative history and part inertia on behalf of local governments to exercise their will to make affordable development a reality that has led us to where we are now. But where we are now is also serving as a wake-up call to those in positions to affect change for the better.

TALES FROM THE HOUSING FRONT: See all the stories, or tell your own