D.J. was my fifth-grade student in 1992. These days we have dinners and play chess every week or two. During those games he updates me on his life.

D.J. recently returned from six weeks of volunteering in Poland and Ukraine. Donovan Corbett — alias D.J. — is a groundskeeper at Carmel Unified School District. He is 37 years old.

This is his story.

Paul Karrer: Whatever possessed you to go to Ukraine? You’re married and have a 10-year-old kiddo.

D.J.:  I think it was from the first day of news coverage of the war. The Russians bombed an elementary school. I work at an elementary school. My son is in elementary school. Plus, I had seen Netflix’s “Winter on Fire,” the inspiring documentary about Ukraine’s democratic revolution. How cool, I thought, that the good guys can still win in these times. Then the images of the school bombing just seemed a simple example of right and wrong.

D.J.: Yes, but after I looked into that it wouldn’t work for me. The deal was you had to sign up for a year. 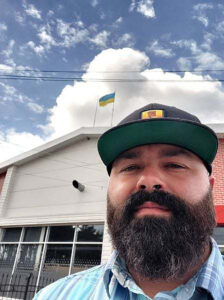 D.J.: As you know, I love motorcycles. I contacted a motorcycle group in Poland. They connected me with a Polish relief agency, PAH (for Polska Akcja Humanitarna, or Polish Humanitarian Aid). The motorcycle group got me at the airport. A member let me stay at his home and fed me a Polish meal — dumplings and fried cheese.

Next day they delivered me to the PAH booth at the Ukrainian/Polish border in a place called Dorohusk. Next to nothing is there. It is the village at the end of the world. There is a train station nearby, that is it. I expected chaos with an endless sea of refugees crossing into Poland. It wasn’t like that at all. I thought there would be tents as far as the eye could see. Reality — we had three tents.

Every morning a van would show up with national guards, border guards and police. Eight guys total. The World Central Kitchen was also there. They had two people in a tent cooking 24/7 with a cot to sleep on. I believe they were bombed in Ukraine and lost a volunteer.

Our PAH tent ranged from three to eight people depending on volunteers. We opened at 6 a.m. and closed at midnight. I got the morning shift, but the first two hours I was on my own. And I don’t speak Polish or Ukrainian. Most of the volunteers were Polish.

P.K.: Who else was at your border?

D.J.: A Polish telecom company called Orange gave the refugees coming through free sim cards for their phones. Oh, I need to say that we did not have contact with all people coming through, only those who stopped at our tent. About a thousand people crossed a day. Ninety-nine percent were women and children. The few guys that came through were elderly.

P.K.: What exactly did you do?

D.J.: We fed people who crossed. First, we gave them hot meals. Then a grocery bag with water, juice, a type of sandwich/croissant, toothpaste, shampoo, fruit if we had it, chocolate and blankets. Diapers and menstrual pads for those who might need them. Kids were given stuffed toys. Time after time, when we gave the kids stuffed animals, the adults cried. That was hard for me.

People who came by train had it the worst. They had come the farthest and often straight from horror. Some had their pets. The pets had to be vaccinated to enter Poland. One 20ish-year-old woman’s cat escaped in the process of being vaccinated and the poor woman became hysterical. I thought that cat may have been the last living thing she had in the world. Everyone stopped to help her. They got the cat finally, but it was just one example of what Ukrainians had gone through.

Lots of terrible stories. An elderly woman stopped by. She was frazzled. She’d left her home to get food and when she came back the house was gone. Completely blown up. Her husband was in it. She had no idea what to do now. She knew no one in Poland. PAH begged some younger Ukrainian women to accompany her deeper into Poland.

On one of my morning shifts a man was waiting for his 6-year-old brother. The boy was supposed to come by train. But at the last minute he was driven by car. That train he was supposed to ride on would have stopped at the train station that was hit by missiles. When (the boy) arrived, both of them cried. I had to look away.

On one of my morning shifts a man was waiting for his 6-year-old brother. The boy was supposed to come by train. But at the last minute he was driven by car. That train he was supposed to ride on would have stopped at the train station that was hit by missiles. When (the boy) arrived, both of them cried. I had to look away.

Surprisingly more people were crossing into Ukraine, at least from our post, than leaving.

D.J.: When the Russians retreated, people started to think it was safer. Plus, it was Easter and people wanted to visit home and see family or see if family still existed. Lots of volunteer groups were heading in from all over the planet. German medical groups. Small groups. Lots of individual volunteers. More than a few foreign military volunteers. 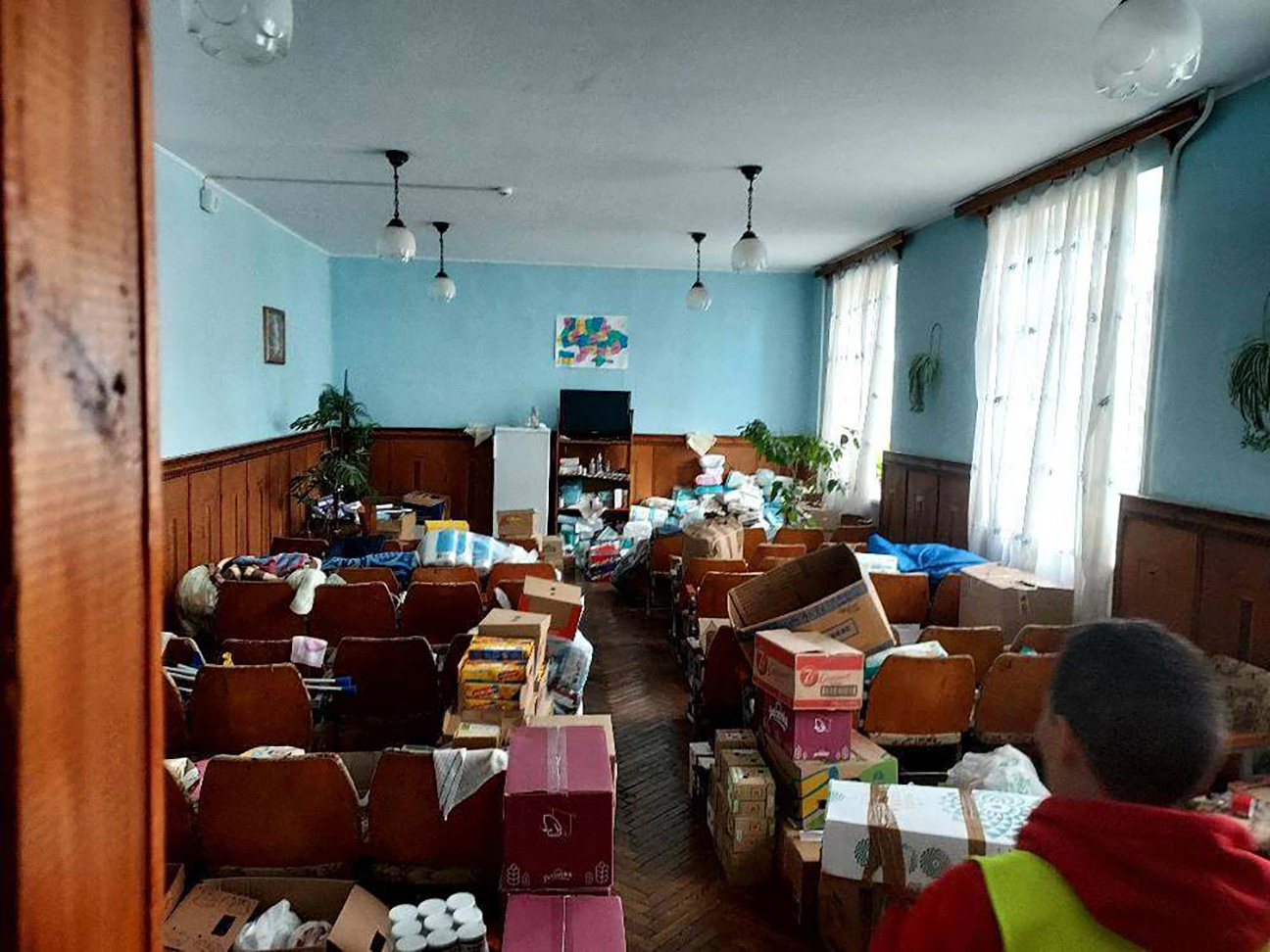 Supplies for Ukrainian refugees are stored in a dormitory.

P.K.: What else stands out?

D.J.: The whole time being there on the Polish side felt weird as we didn’t know what it’s like on the Ukrainian side. Like what’s behind the curtain in “The Wizard of Oz?”? As you know, I raised some money to get donations but I wanted to make sure it got to people who needed it. I wanted to see them get it. I’d been questioned by U.S. Homeland Security when I left and they said, “DO NOT GET IN A CAR IN UKRAINE WITH SOMEONE YOU DO NOT KNOW.  WE CANNOT EMPHASIZE THIS ENOUGH.”

So the whole time I was in Poland I was looking for a way to get into Ukraine to deliver stuff directly and a way to get back out in one piece.

I had enough donations to fill a van with food and water. We crossed the border into Ukraine and drove 30 minutes to a dorm that had been converted for refugees. People unloaded the van. They were super-happy to see the donated items. I told them I was American and they smiled from ear to ear.

I met a person who recommended another person — I’ll call her Ivonka. I had met this Ivonka before at the border. I had enough donations to fill a van with food and water. We crossed the border into Ukraine and drove 30 minutes to a dorm that had been converted for refugees. People unloaded the van. They were super-happy to see the donated items. I told them I was American and they smiled from ear to ear.

We were fed and offered tea. I don’t drink tea, but that day I did. When poor people offer you something, you have to accept it. I thought, What a beautiful but tragic place. Then we high-tailed it back to Poland. Ivonka wouldn’t let us stop. Too dangerous.

P.K.: What made it too dangerous?

D.J.: There are scam artists, gangsters, hijackers and lots of really very, very bad people from all over who have found their way to Ukraine. Especially violent individuals and groups from Belarus. 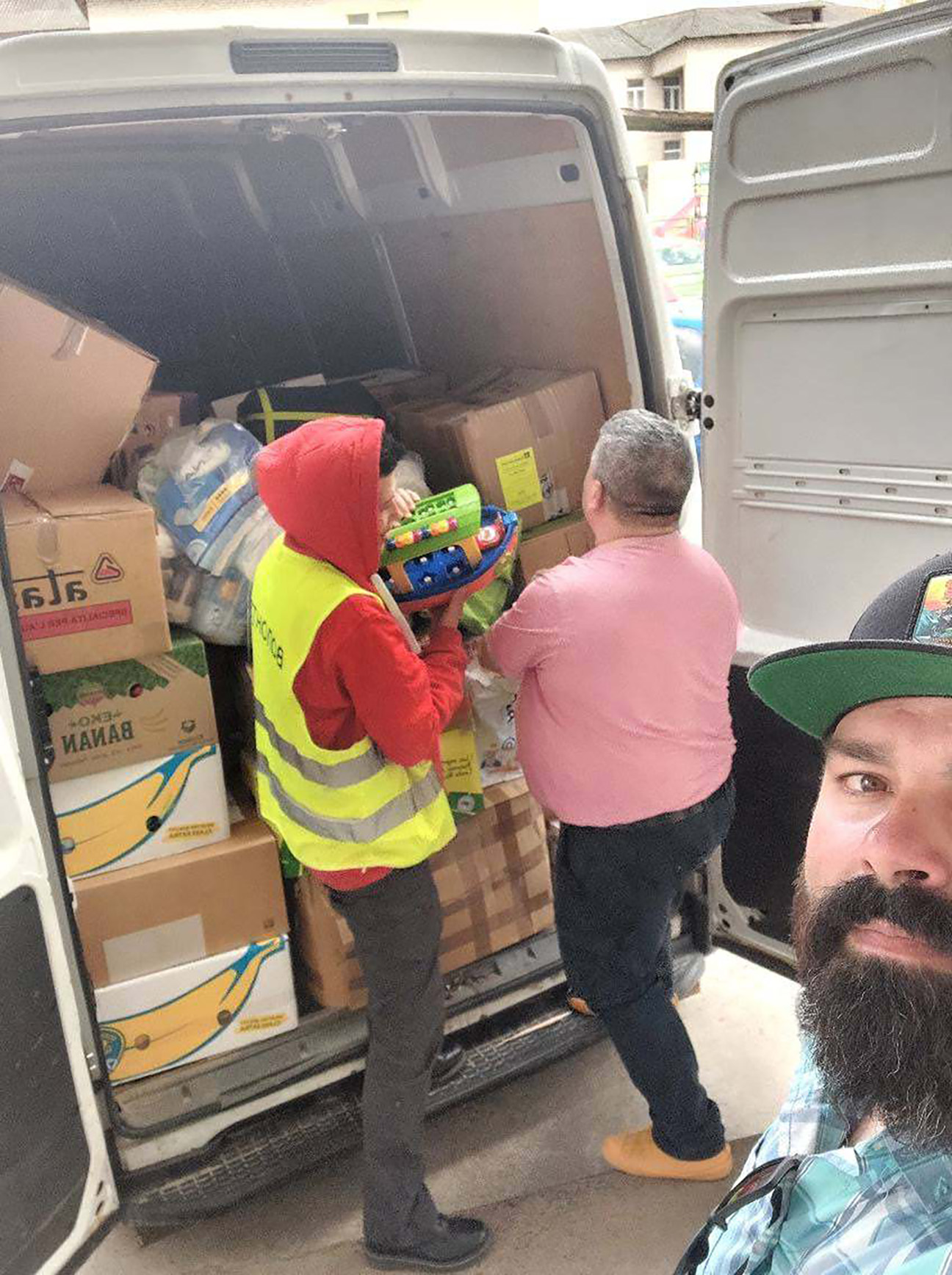 Supplies for refugees arrive at camp.

D.J.: No, I never heard explosions or even jets.

P.K.: Anything stand out for you?

D.J.: The people. Ivonka was an angel. She picked up a New Zealander in Ukraine who was shot five times. Military volunteer.

I met another New Zealander who was training Ukrainian soldiers how to use Israeli drones. They cost $50,000 a pop. He told me he was front line. They got bombed every single day, every couple of minutes. He said it was like WWI trench warfare.

He couldn’t believe the Russians had any more shells left to fire at them — it just never stopped. He also said it was a terrible cat and mouse game. One of his associates was drone-training the Ukrainians too. They have to bring observation drones back to their own home lines. The Russians sent in a drone to follow them and they killed his whole unit.

Oh, one day a Polish man started talking to me. Super nice guy. He was the head manager of a major hotel chain in Poland. He appreciated me volunteering. He said if I ever went to Warsaw he’d make sure I got a big discount on my stay.

During my last week I went to Warsaw. For the heck of it I went to the hotel and mentioned my name. The person behind the counter logged in my name and then she stood up very straight. “Oh, Mr. Corbett, I see you have two nights in our vice presidential suite.”

I laughed, “How much is that?”

Very straight faced, she replied, “You’ve already pre-paid all of it.”

“Yes, so everything in there is free.”

Later I thought … Wow, the balcony is bigger than my house. It must have been an easy thousand dollars a night. Unbelievable.

D.J.: The Poles love Americans. I mean they looooove us. They appreciate their freedom and they know their history.

People have been thanking me for spending my time and money to help. But in reality I got more out of it than they can ever imagine.