If you want to witness the type of impact Ciclovía is having in Salinas, all you have to do is look at Daniela Jiménez. The 24-year-old coordinator of the popular event volunteered for her first Ciclovía in 2014, the second ever. At the time she was still in high school, and afterwards she remained connected to her city through the outdoors extravaganza.

“I attended UC Santa Barbara and for the first two years I did not have an opportunity to be as involved,” Jiménez said. “But with a college and career internship I came back to do some support planning. Once I finally came back to Salinas, it was just something I wanted to continue doing; volunteering to support, staying very connected with this project and event. It opened up a lot of doors for myself. I would not be where I am without Ciclovía.” 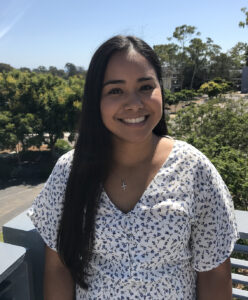 There were 40 high school students taking part in this year’s Ciclovia’s planning, Jiménez said. The daylong event, which took place Sunday, March 20, closes East Alisal Street to cars so people can promenade, ride their bicycles, skateboard, roller skate or simply visit one of the many vendors set up with information.

This past Sunday there was a lucha libre ring, and folklorico performances by adults and students alike. Los Diablos del Llano de Tecomates (Devils from Tecomates Hill) made their presence known through their dancing, their masks and the loud snapping of their whips.

“It was great to see the community out after such a hard time with the pandemic,” Jiménez said. “The community really needed just to have an event to be outside and enjoy the day.”

Indeed, Sunday was a perfect day for outdoor activities: clear skies, no wind. Hundreds of families could be seen on their bikes or just walking – without masks.

During the last big Ciclovía, which took place in October 2019, an estimated 5,000 participated, according to Jiménez. Organizers do not have approximate numbers for this year’s attendance, but it was also a few thousand.

“I’m hoping it was as close to that. Throughout the day it looked busy,” she said.

In addition to the 40 youths who helped organize and man some of the operations such as publicity and art booths, an estimated 110 adult volunteers make the event possible by barricading the streets to through traffic.

“A portion of the planning was done over Zoom,” Jiménez said. “A lot of challenges and obstacles came our way, but the youth were really able to work and plan this event and make it great for the community again.”