Julio Varela, a former soccer star at CSU Monterey Bay, would like to return home as a professional. To achieve that dream, he was back on familiar turf last week to prove to coaches he deserves a spot on the roster of the Monterey Bay Football Club, the first-ever professional soccer team on the Central Coast.

Last weekend, the Monterey Bay FC held its second tryout before the start of its inaugural 2022 season at the CSUMB Sports Complex in Seaside, with local talent from the Monterey County and surrounding areas — and even players from out of state — showing up to the pitch, ready to showcase their skills. Varela was an invited player who showed up for an earlier tryout, and he hoped to make a good impression with a return last weekend.

“If everything goes well, hopefully I get invited to preseason and work things out on the other side,” said Varela.

Varela is currently under contract with the Dallas Sidekicks, an arena soccer team in the Major Arena Soccer League. He was most valuable player on the Watsonville High School team, played at Hartnell College and finished up his collegiate career at CSUMB before signing a contract with the Turlock Cal Express and, later, with Dallas.

Varela wants a shot at Monterey Bay FC, but so do dozens of others who have showed up at the Sports Complex for tryouts.

Open registration for tryouts was accessible for players at 11 a.m. Jan. 4. A few minutes later, registration was completely booked and closed to the public, according to Christina Ferrante, vice president of marketing and communications for the team. Registration fee was $150 per player.

“We were having people from all over the world contacting us — from Europe, Africa, South America — calling and sending messages wanting to be part of the tryouts,” said Ferrante about the overwhelming number of players wanting to register. Eighty-seven players have come to open tryouts so far.

One of those players who booked their spot for the open tryout is 16-year-old goalkeeper Anderson Laparra, who made the 13-hour drive from Orem, Utah, to Seaside with his family, hoping to be recognized for his goalkeeping abilities.

“I have been all over the place trying to make it somewhere,” said Laparra. “I signed up for the tryouts, but then they contacted me saying I was on the list.”

Laparra is currently a high school junior and plays club soccer, with his dad Julio Laparra, a former second division soccer player in Nicaragua, as head coach for the team.

“It is a beautiful experience to support my son in what he desires the most. It motivates me as a father to continue fighting for his dream,” said Julio Laparra.

During the tryout last weekend, three full games were played, with six teams going head to head. Each team had about 15 players ready to make an impression on head coach Frank Yallop and assistant coach Ramiro Corrales.

For 90 minutes, players were going full speed after the ball and commanding the game just to get their names recognized.

“I got about three or four spots open right now that I am trying to fill,” said Yallop, about the current status of the roster.

Filling in those empty spots is pretty simple.

Invited players will have to show up to practice with the full roster and give it their all. Then, Yallop will evaluate their skills to see how they can fit the team’s needs. If all goes well, players will be signed to a one- or two-year contract.

CSUMB grad Walmer Martinez and USL League One Goalkeeper-of-the -Year Dallas Jaye are the only two players signed so far by Monterey Bay FC.  The challenge of building a polished roster from the ground up is at the fore for coaches Yallop and Corrales.

“I feel confident in my availability to build a roster,” said Yallop. “Usually, year two is better than year one because you don’t know what quite you got.”

The Union is set to kick off the first match of its inaugural season on March 12 against Phoenix Rising FC in Chandler, Ariz.

Monterey Bay FC will serve as visitors during their first seven games, which the old football stadium at Fort Ord is being repurposed as a soccer pitch. their first home game, against the Las Vegas Light FC, is scheduled on May 7. 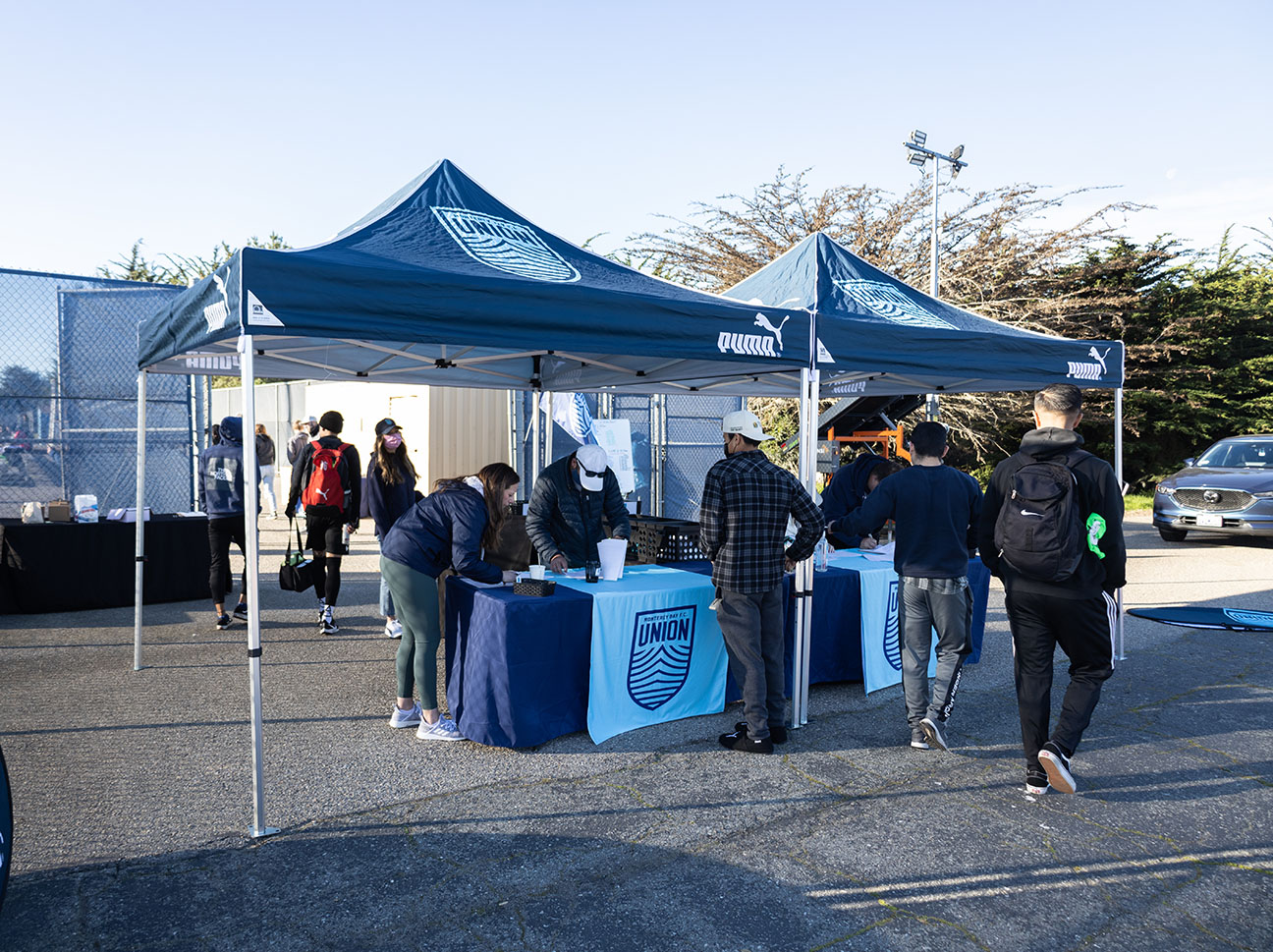 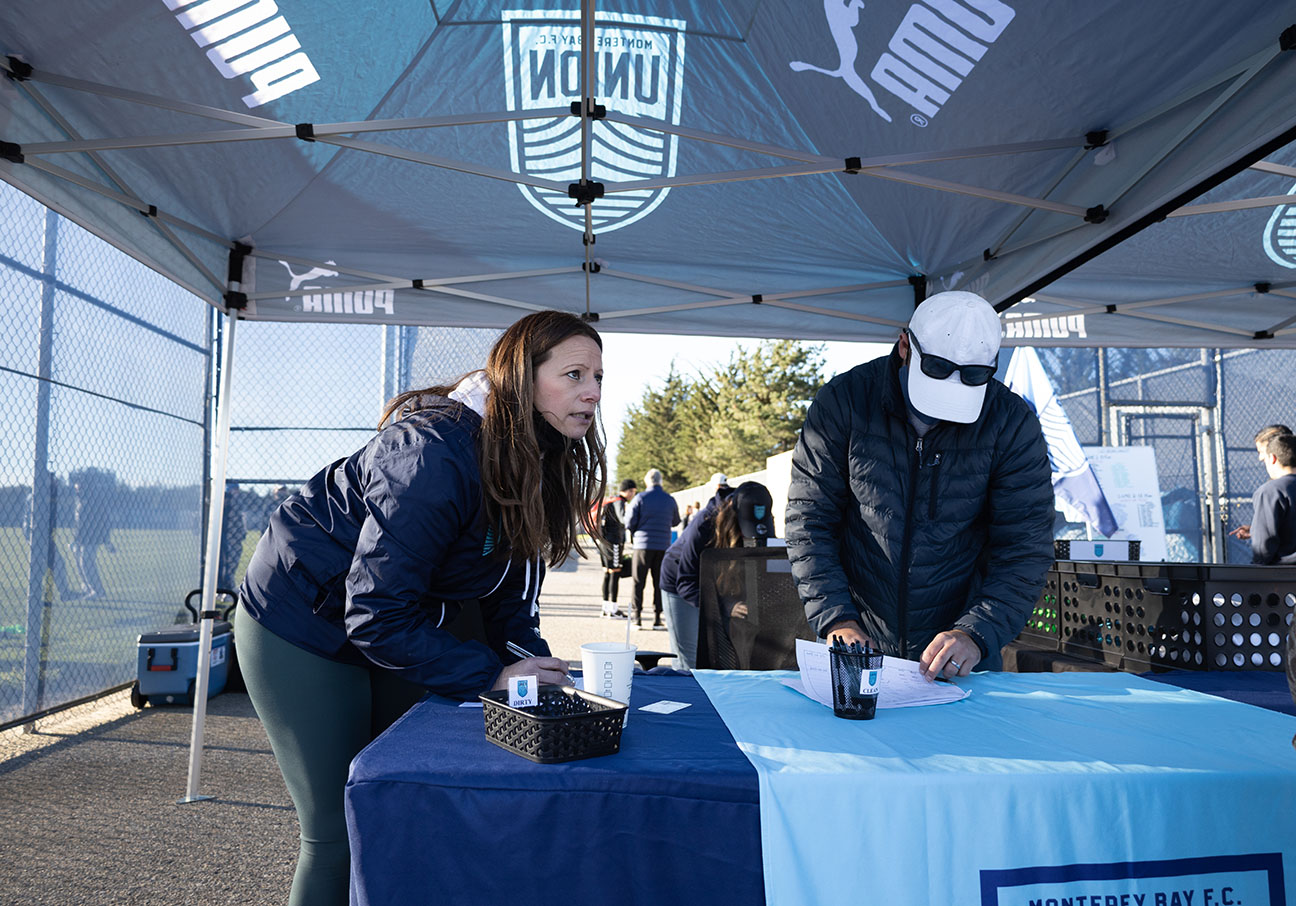 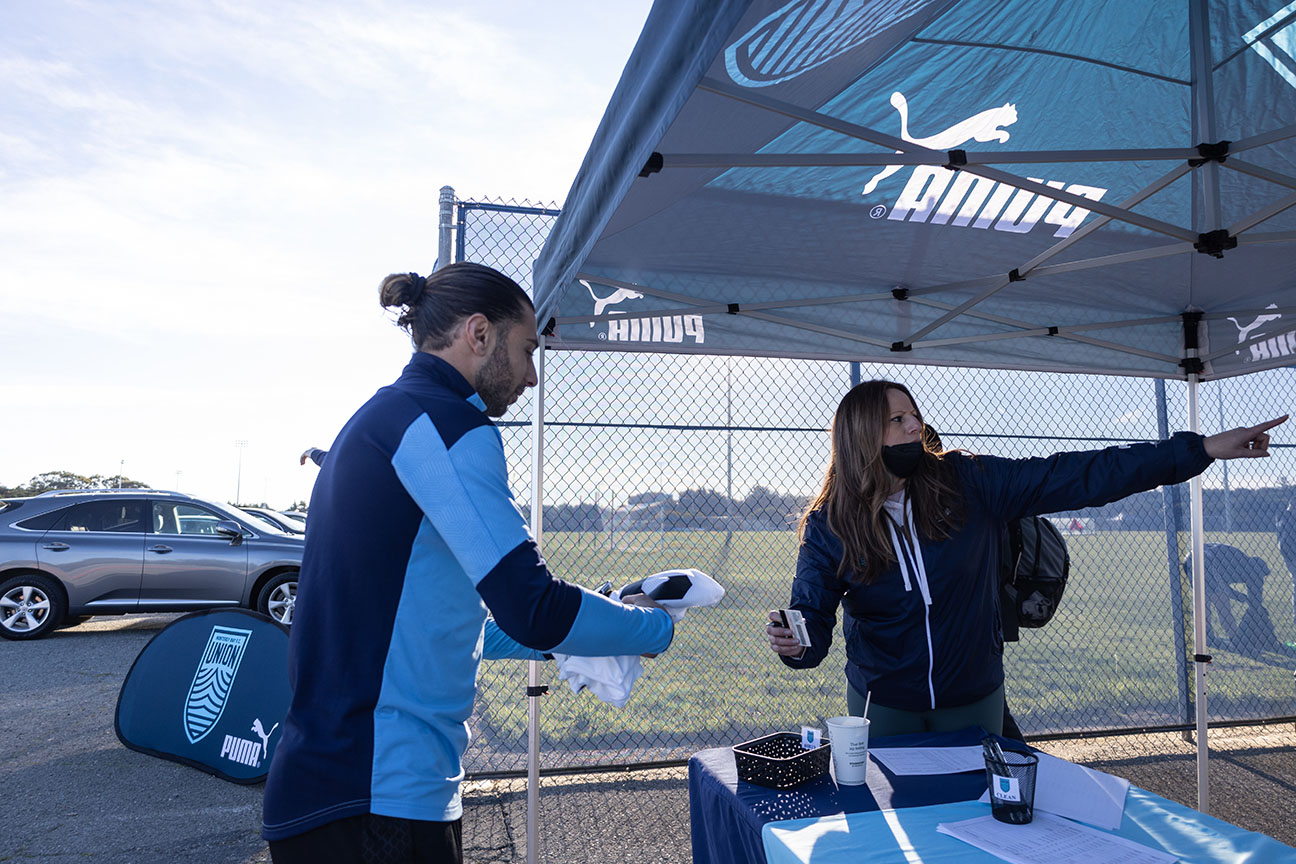 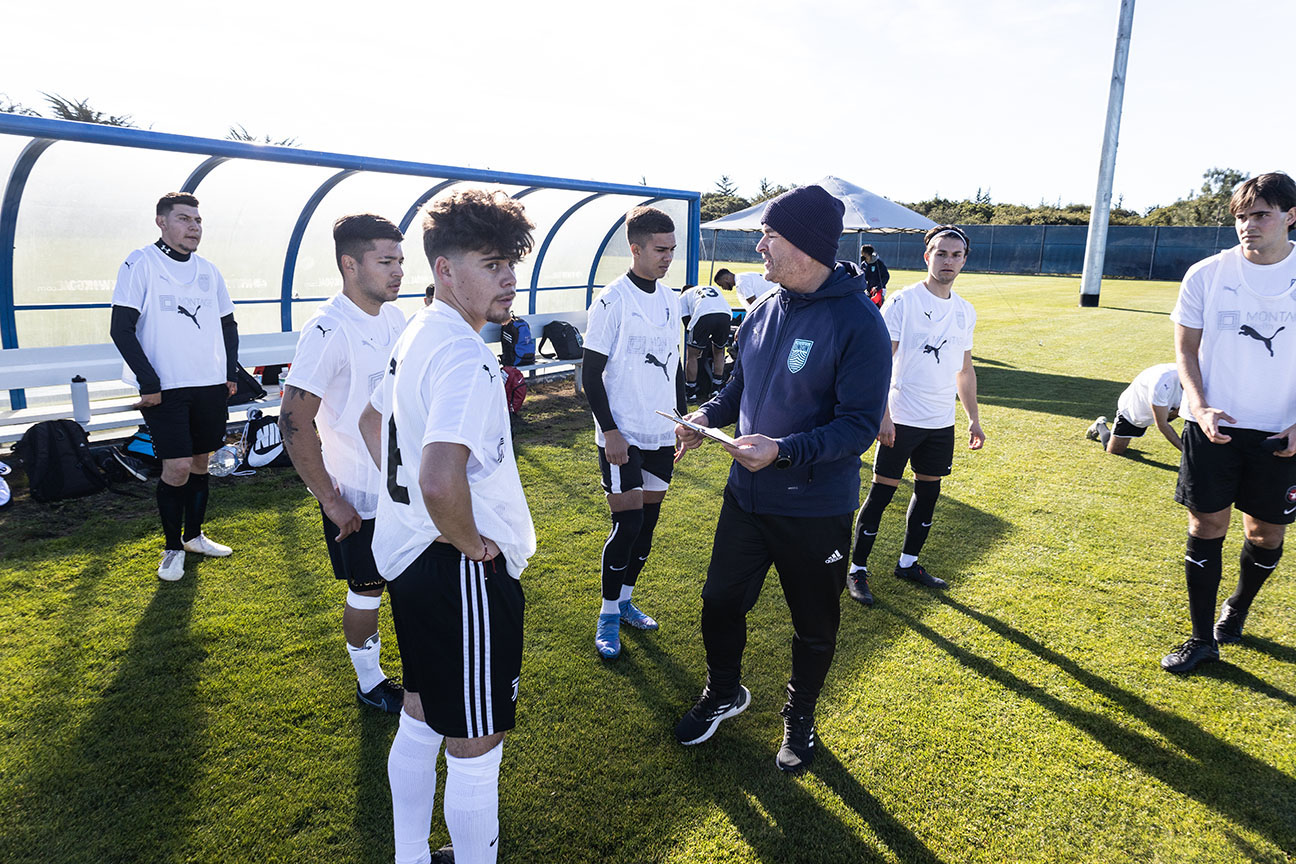 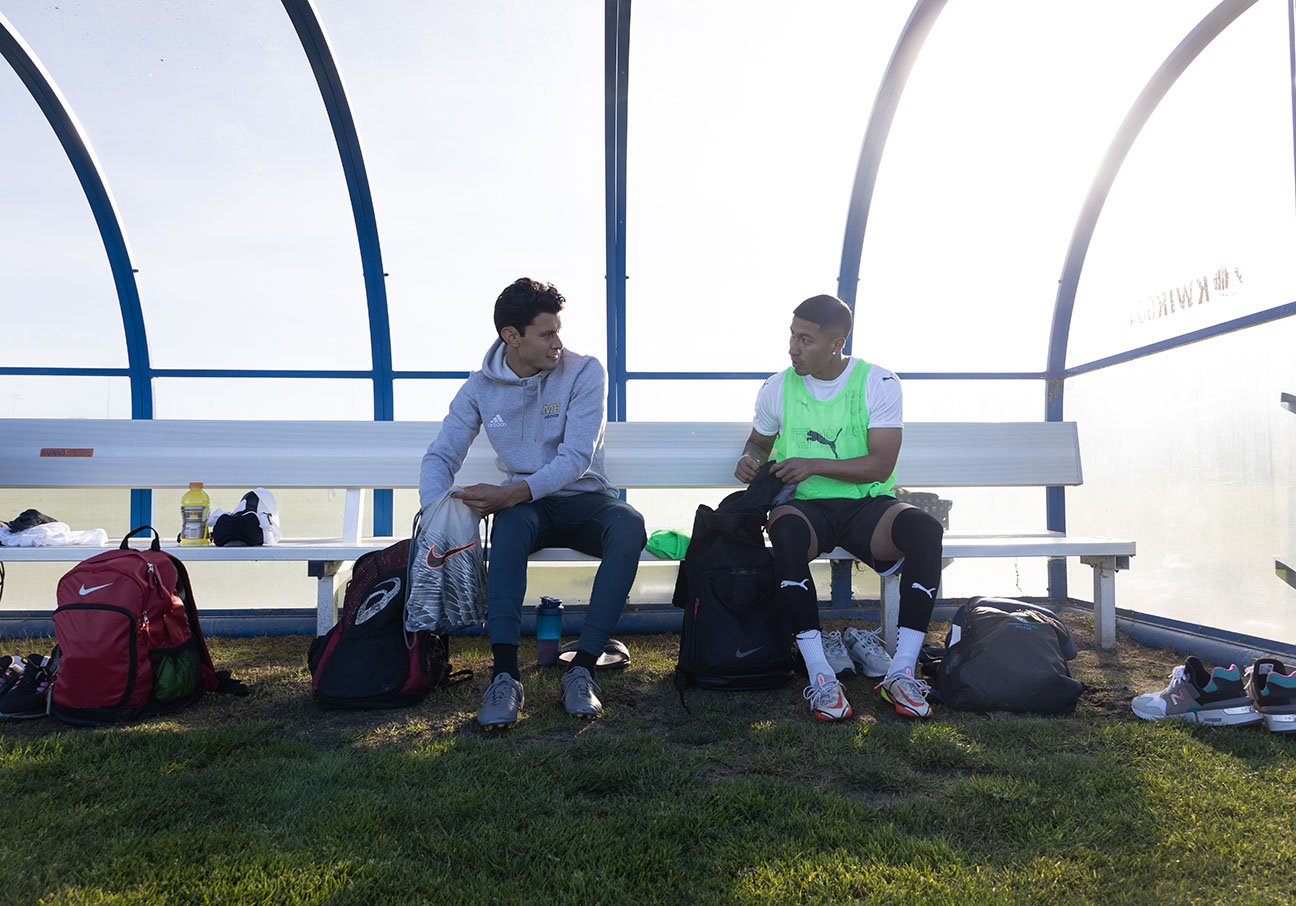 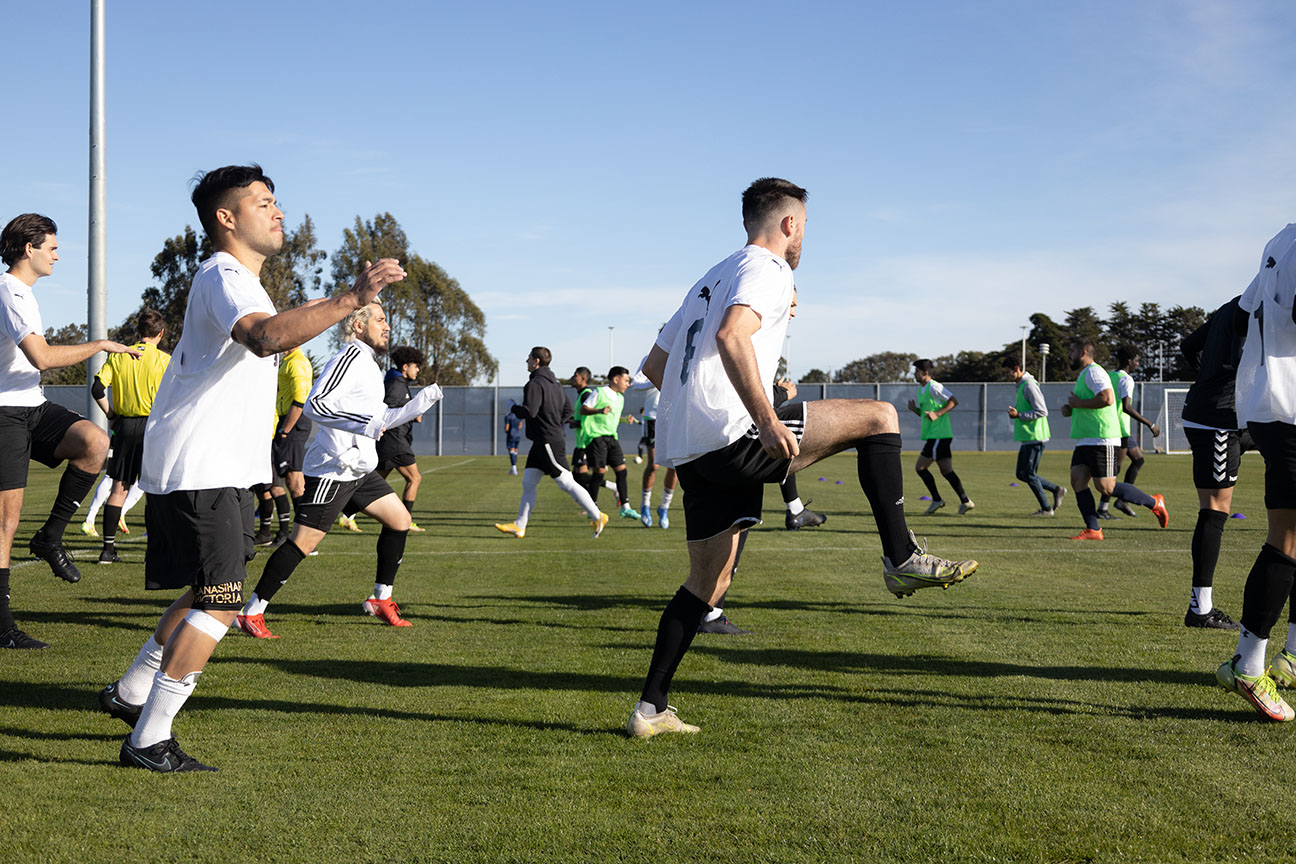 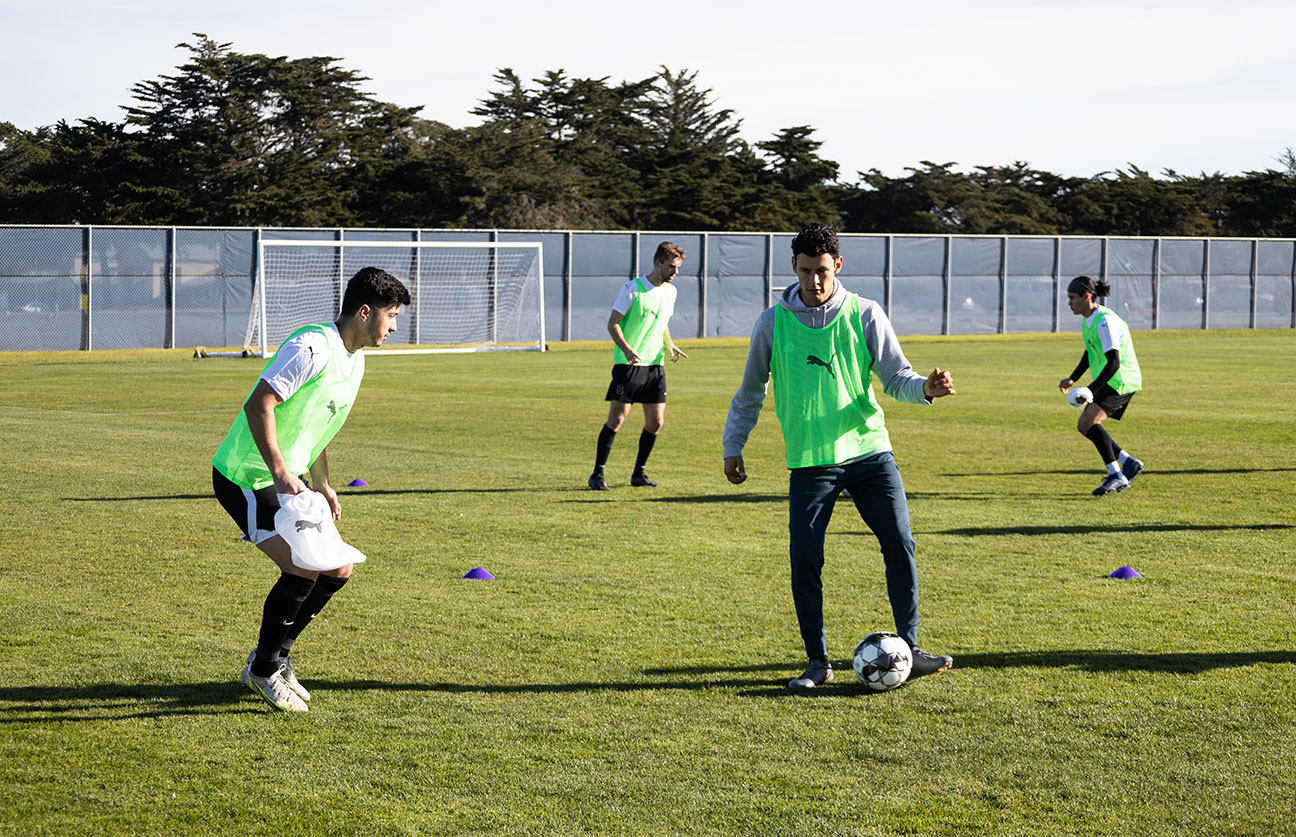 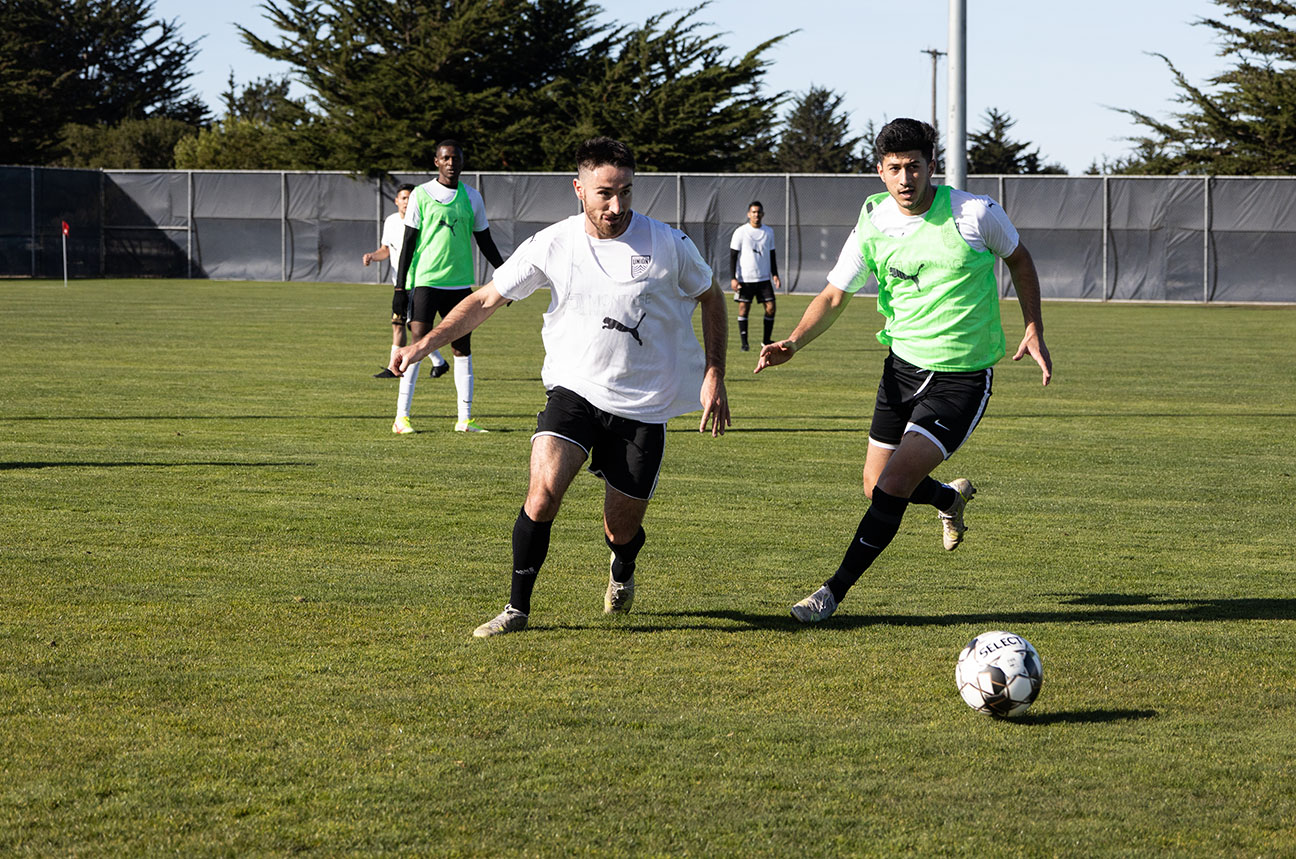 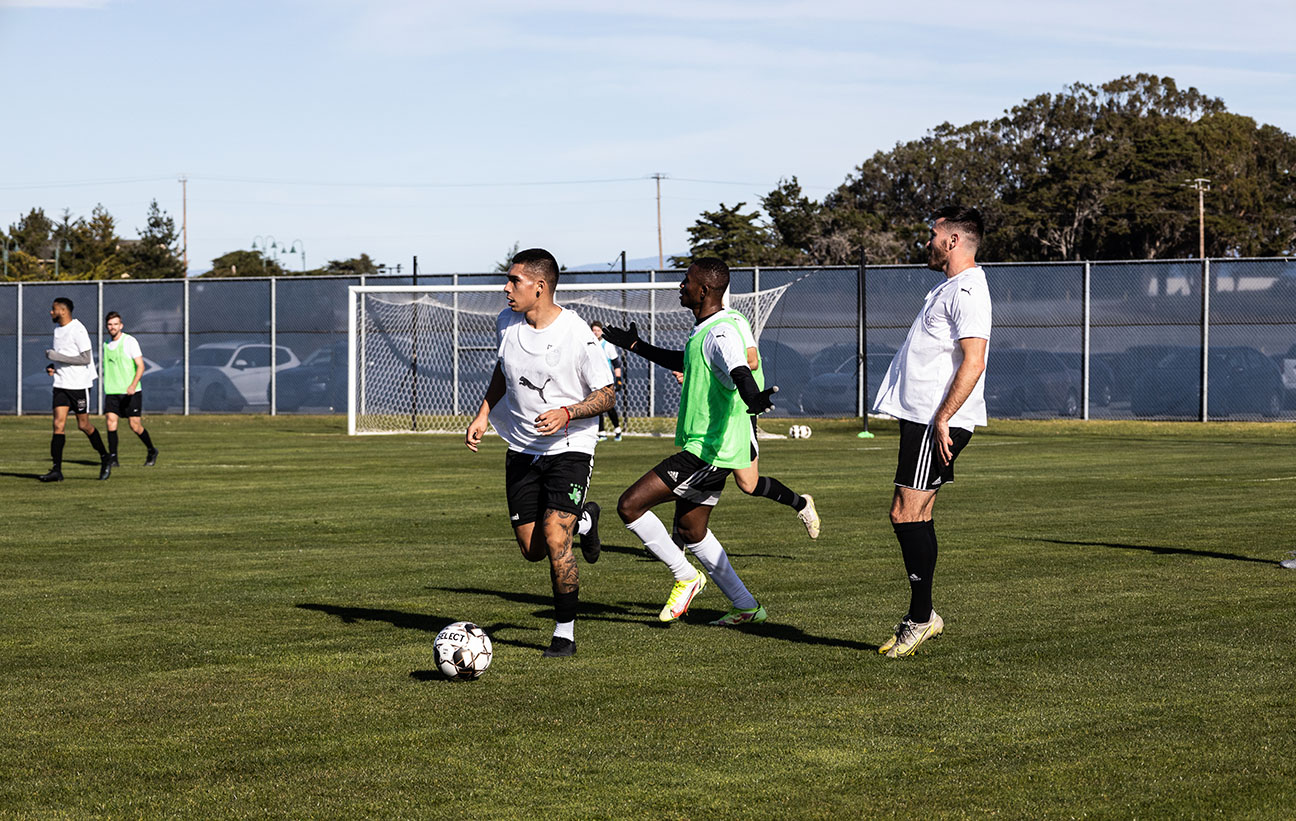 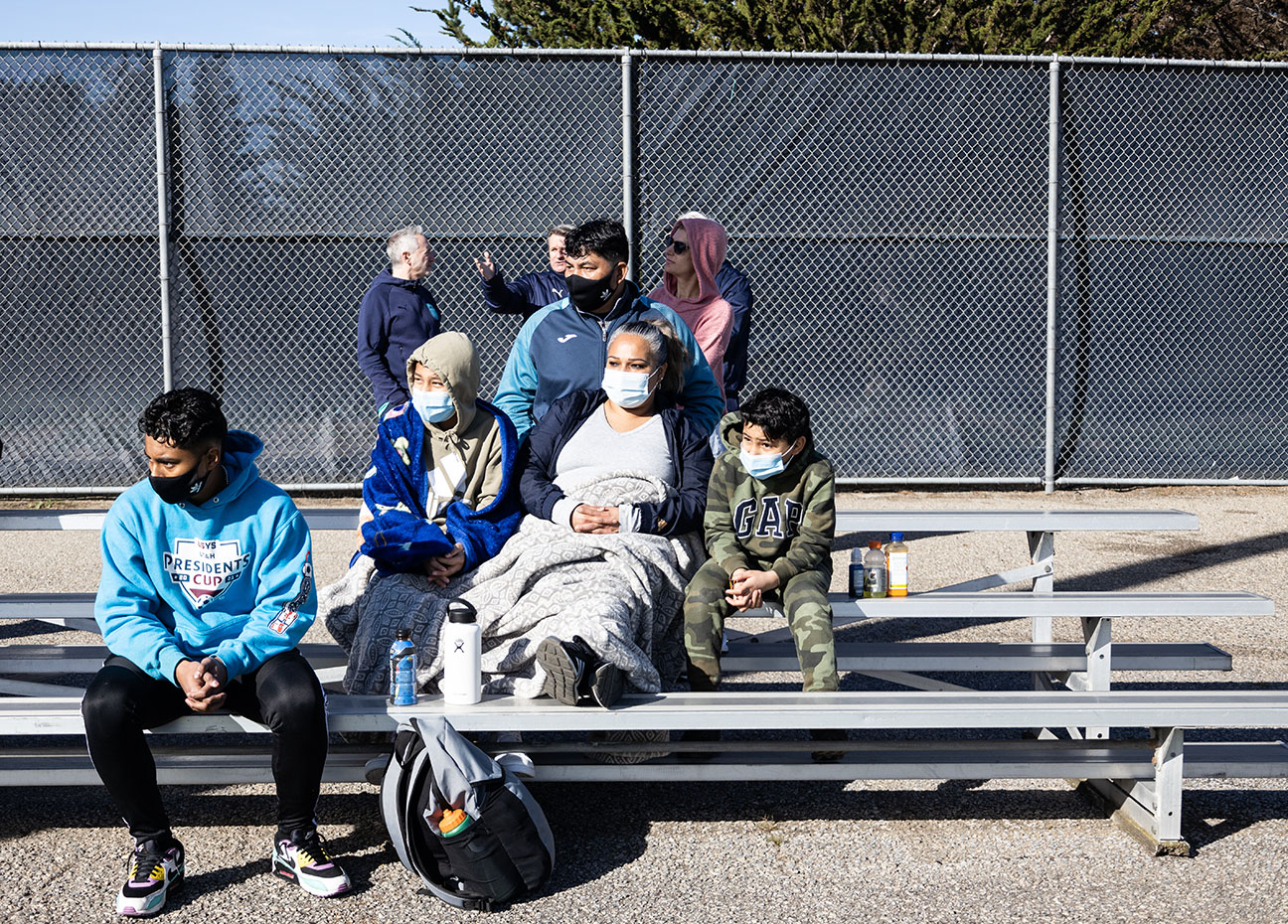 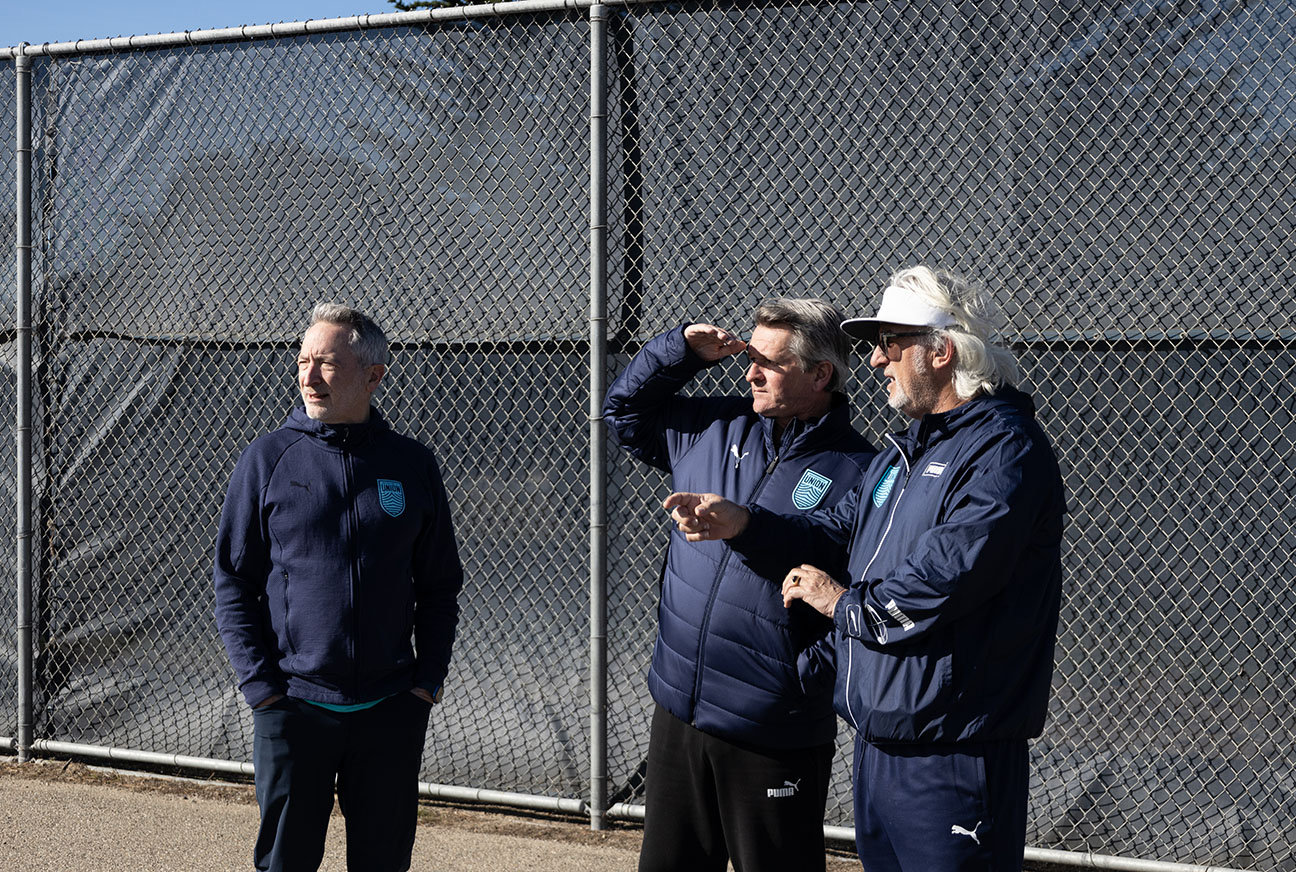 Featured image: The white team gathers in a huddle before their first game on Saturday, January 22, 2022, in Seaside, California | Photo by Carlos Rene Castro