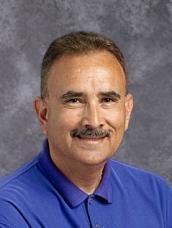 John Gutierrez, the beloved principal of Bolsa Knolls Middle School, passed away in his sleep because of COVID-19 on October 18, 2020.

Mr. Gutierrez helped open the school in 2010 and was known for his involvement in the North Salinas school community. Now his legacy will always be remembered, as the middle school has been renamed John Gutierrez Middle School.

“When he passed away, the community outpouring was great,” said Neil Patel, a Santa Rita School District board trustee. “Many families, teachers, staff members, secretaries, they all wanted to do something special to remember John Gutierrez and what he did not only for the school, but for the local community. So really this idea of changing the name of the school, it didn’t really come from the school board, it came from the public.

“We often name schools after very famous people that have very little to do with the local community. And this time, we wanted to choose a person who not only lived in the community, but worked at the school and was an educator.”

As the first principal, Mr. Gutierrez worked hard to make the middle school what it is today. He was the first to arrive at school and the last to leave. He cared for both the students and their environment. During lunch he would walk around picking up garbage, trying to keep the school clean. After school he would help the students cross the street, to keep them safe.

As a student who attended the middle school during Mr. Gutierrez’s time working there, I was able to see how much the school meant to him. Every morning he made sure that music was playing during breaks and lunch, so that the students would have a calming environment to hang out in. He would also personally make the morning announcements so that students were informed about what was happening on campus.

Two of the most memorable events that Mr. Gutierrez put on were the Beach Trip and the Bowling Trip. The Beach Trip was an annual event held by the school to take students to Monterey State Beach. The Bowling Trip was another yearly event held at a Salinas bowling alley. Staff would volunteer to chaperone the students, and there wasn’t a year that Mr. Gutierrez was not volunteering. During these trips he took photographs of students having fun with their friends. He also made a point of talking to all the students, making sure that they were enjoying themselves. To him, it was important to form connections with his students and these trips gave him the opportunity to do that, especially the sixth-graders.

Because of the legacy Mr. Gutierrez leaves behind, staff and families felt compelled to change the name of the school to John Gutierrez Middle School.

“It was his baby,” said Jean-Paul Martel, a teacher who worked alongside Mr. Gutierrez for more than 10 years. “That’s one big reason to name it after him.” He remembered how Mr. Gutierrez stayed after school, supporting the various sports teams and fixing up the school.

'Mr. G was everything for the kids. We miss him so much over here.'

“You cannot walk on this campus if you’ve known John without memories of him coming up,” said Jordan Stockdale, a physical education teacher who worked with Mr. Gutierrez for three years.

Discussion about naming the school John Gutierrez Middle School started a month after his passing.

Martel said it was a complicated process to change the name, even with community support for the idea. First, the Santa Rita Union School District board had to approve the name change.

“The district, they wanted to have a statue,” Martel said. “They were just going to name the gym or something, but the teachers said, ‘No way! The whole place!’ You know, every inch of it. It’s his school.”

“It was almost a petition-type thing,” Stockdale added. “They came and interviewed (staff members) …. We gave our reasons why and went to the board and then they pretty much said, ‘Yeah, sounds like everyone is up for this.’ ”

It was clear that the families of students also supported the idea. “I believe it was important to rename the school after Mr. Gutierrez because he had accomplished so much and was so involved in the school,” said Natalia Rivera, the ASB president of John Gutierrez Middle School from 2020-21. “Doing anything less wouldn’t be enough to honor him.” She added that most of the students agreed with the name change and had mostly positive comments about it. However, it was still a long and costly process.

“It is a very difficult process to change the name of a school,” Patel said. “You have a lot of paperwork. You have to get approval from the county as well as the state Department of Education, so it took us a while to get everything done.”

The approximate cost of the renaming was $10,000, and included the cost of changing school signs and school gear logos. “Overall, the cost was relatively low compared to the long-term positive impact this will have for our local community and also our parents, students, and staff,” said Patel.

It took the board and community several months to finalize the name change. However, Patel said the California Department of Education approved the proposal once board members saw the community support and Mr. Gutierrez’s importance in the community. The Santa Rita board of trustees voted to rename the middle school on April 28, 2021.

The name change became official in May, eight months after Mr. Gutierrez’s passing, when about 200 friends, families and school staff gathered in person and more gathered online for a commemoration ceremony honoring Mr. Gutierrez. In July, the school sign was finally changed from Bolsa Knolls Middle School to John Gutierrez Middle School.