Jessica Taft was doing her undergraduate studies when the Spice Girls entered into the fray of pop culture in the late 1990s and brought along the idea of “girl power.” She spent time writing about the girl group and their influence on society, so much so that her friends playfully dubbed her “Brainy Spice.”

Girl power is a topic she continued to look at for the past 20 years. Taft is now a professor of Latin American and Latino Studies at UC Santa Cruz researching young people’s activism and participation in social movements in North and South America.

“Young people … really have a pretty nuanced and complex understanding of injustice and inequality, and what’s fair and what’s right, and we, as adults, have done a pretty bad job of listening to them and taking them seriously,” Taft said.

“Rather than thinking about ... ‘what is this girl actually saying about colonialism, about capitalism, about racism’ instead it's ... ‘Oh, look, it's a girl. Isn't this amazing?’”
Jessica Taft

In a recent article, “Hopeful, Harmless, and Heroic: Figuring the Girl Activist as Global Savior,” Taft focused on the status of the “girl activist.” She points to examples like Greta Thunberg and Malala Yousafzai that have risen in prominence over the past decade, and her research has explored the consequences of presenting these girl activists as global saviors assigned to fix the world’s problems.

Taft says that there’s been a steady expansion in the way the public imagines girls’ roles in society that has made the girl activist more interesting and desirable for media and social consumption. As a result, they’ve become powerful figures in mainstream media since the start of the 21st century. However, Taft is concerned with the way that media portrayals of girl activists focus mainly on their status as young girls, distracting from the content and causes they’re fighting for.

“These narratives really focused on what they think of as the specialness of this particular figure of this young girl, rather than actually engaging with the kind of critical political analysis that they’re presenting,” Taft said. “Rather than thinking about, like, ‘what is this girl actually saying about colonialism, about capitalism, about racism’ instead it’s just like, ‘Oh, look, it’s a girl. Isn’t this amazing?’”

Taft also says that girls are particularly compelling figures for media focus since they are simultaneously a representation of the possibility of change and a brighter future. However, they are seen as less threatening than young boys in the political sphere.

She accounts for the fact that girls are socialized to care about other people and their community, whereas this might be suppressed in boys as they’re often raised to conform to societal masculinity that doesn’t necessarily include care and emotion. It’s there that she states that there’s evidence that in high school, girls take on more leadership roles than boys.

“I talk about them as being sort of portrayed as easier to contain, as being seen as harmless. Their more revolutionary and more radical political visions are contained by their girlhood,” Taft said. People in power “are made safe by the idea of girls as kind of light, fluffy, not serious, safer kinds of figures.”

She also said that when young people are allowed to speak and write for themselves in the media, they tend to focus on the content of what they are fighting for. She listed Jamie Margolin as a good example of this. Margolin is a college freshman at NYU who created the climate organization Zero Hour and wrote a New York Times op-ed about the intersections between capitalism, colonialism and climate change.

To Taft, this was a good example of media letting girl activists speak for themselves and articulate their own visions for how to address those issues. For the media to fully understand the girl activist and portray them accurately, they must focus on the words that are being spoken, not the girl who is speaking them.

"Focus on the actual content of the struggle and what it is that young people are saying, as opposed to just the fact of their youth" Jessica Taft

“We need to not just focus on the fact that they are young, and get distracted by the sort of identities of them as young people, and actually engage with the content of their ideas,” Taft said. “I think the more that the media can focus on the actual content of the struggle and what it is that young people are saying, as opposed to just the fact of their youth, the better their coverage will be.”

Taft also says in the media portrayals of girl activists, there is an additional stratification as some girl activists get far more media attention that’s often tied to race, nation and class. Taft says that the inequality in which girl activists get talked about definitely brings negative effects as the lack of diversity will stifle attitudes for future girl activists. 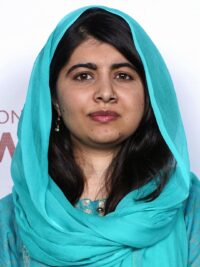 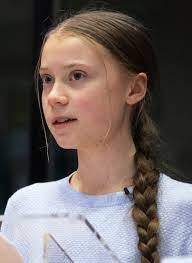 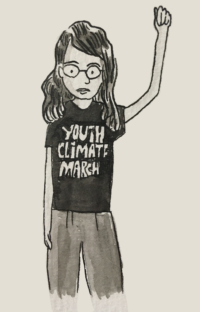 Teenage climate change activist Greta Thunberg agrees with this, using her initial fame and stardom to highlight other underrepresented activists. The Associated Press reported that Thunberg said, “it is people especially from the global south, especially from indigenous communities, who need to tell their stories.”

However, with social media and the internet now a mainstay in society, it created possibilities for movements of all ages to self-narrate and amplify each other’s perspectives. Now that young activists have been given a chance to weigh in and make their voices heard, Taft reiterates that it is not only up to them to be the saviors that the world needs.

“That is an unfair thing to ask of anyone, to be the group that fixes all of our problems,” Taft said. “Greta Thunberg, you’re gonna solve climate change, right? Of course not. That’s absurd.”

She said that while young activists want a seat at the table, they don’t want to go it alone. “They actually want adults to be in the struggle with them,” Taft said.

“There’s no reason to exclude young people from political participation. But that also doesn’t mean that we should rely upon them to do all of it,” she added.

Ryan Loyola is the Assistant City Editor at City on a Hill Press, the student-run weekly at UC Santa Cruz. He also is a contributor to the College Journalism Network working in conjunction with CalMatters reporting on higher education.