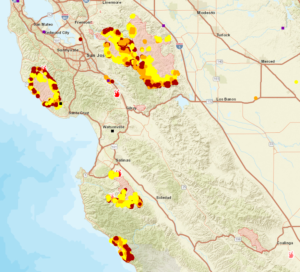 Story and photos by Charlotte West

Under a smoke-choked Friday afternoon sky, UC Santa Cruz officials directed students loaded down with suitcases across Beach Street along the nearly deserted Santa Cruz Boardwalk and onto shuttles headed for San Jose State University. Around 15 evacuating students had spent Thursday night in a temporary shelter set up at the Cocoanut Grove event space, while many others stayed in nearby hotels.

On Thursday afternoon, UCSC officials began preparing the 1,200 students, staff, and faculty who lived on campus for the possibility of evacuation as the flames of the CZU Lightning Complex fire inched towards the edge of campus. They were encouraged to voluntarily evacuate, or at the very least, be ready to go. By Thursday evening, CalFire had issued a mandatory evacuation order and residents were told to prepare to be away for at least two weeks.

“I think that they knew that the campus was going to be evacuated when they issued the warning, which was really just to get people moving,” said James Byron, a resident assistant in graduate student housing. He said that most of the 30 students living in graduate housing this summer had left by the time the evacuation became mandatory.

He said he was one of the last to leave, and he was able to stay in a hotel with his girlfriend, who was quarantining due to the COVID-19 pandemic.

This is not the first time California universities have had to evacuate due to threat from wildfire. In 2019, Sonoma State University evacuated 3,000 students who lived on campus due to the institution’s proximity to the Kincade fire.

University officials announced on Saturday morning that the fire remains about a mile north of upper campus. Cal Fire crews have established fire lines to try and slow the spread toward the campus and the city of Santa Cruz.

Many students and staff living on campus went elsewhere, but approximately 75 employees and students went through the evacuation center, according to UCSC spokesman Scott Herdandez-Jason.

One of them was Harry Feng, a third-year student from China studying technology and information management. He was standing outside the San Jose-bound shuttles as university staff waited for another student to retrieve something he left in the Cocoanut Grove shelter.

He seemed to have taken the evacuation mostly in stride, though he was glad he was assigned a hotel room on Thursday night. He said many other students just fell asleep in their assigned areas of the shelter.

Feng is taking two summer classes with finals coming up, so “as long as I have the Internet, I should be fine,” he said.

Jean Marie Scott, UCSC associate vice chancellor for risk and safety services, said that one of the challenges was figuring out how to safely house evacuated campus residents in the middle of a pandemic. They had to address issues such as how many students could be accommodated in a hotel room and how to isolate those who might have COVID-19 symptoms.

“Up in the evacuation area, we had tape on the ground that marks a six by six feet square,” she said.

After being taken to the temporary shelter for needs assessment, students who had families were assigned to local hotels, Scott said.

Some students stayed at the shelter for just a few hours while they waited for family members to pick them up, but the university provided basic supplies for those who spent the night. Scott said the university has a cache of materials in its emergency supply that they were able to use to set up the shelter.

“This was the first we’ve ever had to deploy all of it,” she said. “But it’s everything from water and sleeping materials to fans and anything else that we could possibly use when doing an evacuation of our student resident population.”

"You can't train for what just happened this week. Well, maybe you could train for it, but you can’t train for it if you can't imagine it. Maybe that's it." Jean Marie Scott, UCSC associate vice chancellor for risk and safety services

Scott estimates that approximately 40 UCSC will stay in the dorms at SJSU, which has extra capacity in its residence halls because many of its own students have remained home with families due to remote learning. Many of the displaced UCSC residents, like Feng, are international students who have nowhere else to go.

This is common practice during natural disasters. For example, colleges and universities in the mainland United States took in evacuated students from Puerto Rico after Hurricane Maria in 2017, although the disruption there was much greater. While UCSC students will be able to continue their studies online, they’ll receive accommodation and support from SJSU.

“The arrangement is that they’ll stay over at San Jose State until we can bring them back on our campus,” Scott said. “They’ll have the same amenities — a single room, bathroom, food service and support services.”

The initial focus of the Cocoanut Grove center was to support students and staff who had been displaced from university housing, but the fire has also impacted students and staff who live off-campus. “Even as early as Thursday, we had a number of our employees that live up in the Boulder Creek-Felton area who needed support because they were evacuated,” Scott said. “Some of them have lost their homes, so they are being housed in one of our facilities downtown.”

The Cocoanut Grove space is also being used as UCSC’s emergency response center.

Scott said there is an assumption in emergency management that universities will be able to take care of their own staff and students without depleting the resources of the broader community. In fact, the universities themselves often become a support system for local residents. During the 2018 Camp Fire in Butte County, Chico State became a community hub as evacuees fled from surrounding communities devastated by the fire.

Before UCSC was potentially affected by the fire, the institution had been called upon to provide meal prep for Santa Cruz County evacuees through mutual aid agreements between local agencies. But the university had to shut down its kitchens when the campus was evacuated.

One of the reasons they chose Cocoanut Grove was because they would have access to a commercial kitchen. UCSC food services staff have been preparing 3,000 meals a day that are distributed throughout the county.

The university had also been in discussions with the county about using some of its vacant residence halls to house community members when the campus was evacuated. “But then when everything changed and it seemed that UCSC was going to actually be in the path of the fire, we had to back off of that because we didn’t want to move people on campus only to move them off campus,” Scott said.

She said that when it becomes safe to return to campus they will continue to work with the county to see if the university can provide housing. The campus will be reopened in phases as power and other utilities were shut down as part of the evacuation process. It will take time to safely bring 500 buildings and 2,500 acres back online, Scott said.

As an emergency management expert, Scott routinely does tabletop exercises to plan for various scenarios. But responding to emergency evacuations due to wildfires in the middle of a pandemic was a new one. “You can’t train for what just happened this week,” she said. “Well, maybe you could train for it, but you can’t train for it if you can’t imagine it. Maybe that’s it.”

Charlotte West is a freelance journalist who covers education, criminal justice, housing, and politics. She is a member of the Education Writers Association and was a 2019 Kiplinger Fellow.