Monterey, Calif. – Join the DWMC as we celebrate the Centennial of the 19th Amendment with Dr. Bettina Aptheker. Attendees are invited to wear white, purple or gold to commemorate women’s suffrage.

From the Women’s Rights Convention in 1848 until the passage of the 19th Amendment in August 1920 women campaigned vigorously, courageously and with growing confidence for the right to vote against seemingly insurmountable odds. Woman suffrage was always intertwined with struggles against racism, white supremacy, lynching, settler colonialism, and anti-immigrant insularity. The victory of 1920 resonates today as we struggle to expand voting rights for all citizens for the 2020 Presidential election, the most consequential election in our lifetimes. 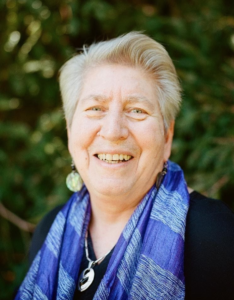 Bettina Aptheker is Distinguished Professor Emerita, Feminist Studies Department at UCSC where she has taught for more than 40 years. She holds the Jack and Peggy Baskin Foundation Presidential Chair for Feminist Studies, and jointly held the UC Presidential Chair in Feminist Critical Race & Ethnic Studies (2012-2015). Her current research is on “Queering the History of the Communist Left in the United States.” Amongher books is a memoir, Intimate Politics: How I Grew Up Red, Fought for Free Speech and Became A Feminist Rebel (2006) and The Morning Breaks: The Trial of Angela Davis (1976; 1999) based on her experiences as a co-leader of the transnational movement to Free Angela Davis, and her position as a ‘legal investigator’ for the defense during the trial.

Bettina is married to Kate Miller, who taught in Women’s Studies at MPC for many years. Together they raised three children and are grandmothers to three grandsons. As a scholar-activist Bettina is deeply committed to anti-racist work, speaking widely about the #MeToo movement, and supporting all efforts to protect and sustain immigrants, the undocumented, and the Dreamers.

Reservations must be received by Tuesday, March 17.

The Democratic Women of Monterey County (DWMC) is a volunteer organization that champions Democratic candidates and campaigns on political issues that affect all citizens while emphasizing the role of women. The DWMC is dedicated to creating opportunities for Democratic women to interact, participate and educate themselves and the community about political candidates and issues. Contact the DWMC by email at Publicity@dw-mc.org, by phone at 831.200.DWMC or by mail at P.O. Box 223003, Carmel, CA 93922

Do Good is a free service open to help nonprofit agencies on the Central Coast promote their services or events. Press releases provided by charities are posted verbatim. Postings on Do Good do not necessarily reflect the views of Voices of Monterey Bay.