Award-winning author and journalist Mark Arax will read from his new book, “The Dreamt Land: Chasing Water and Dust Across California,” and sign copies in an appearance that starts at 7:30 p.m. July 10, at The Lab in Carmel. 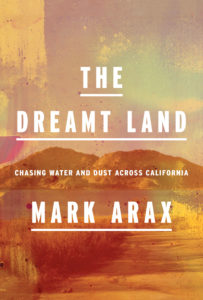 The free event is sponsored by Voices of Monterey Bay.

The Lab is located directly above the Carmel Valley Roasting Co. and across from Sur Restaurant in the Barnyard shopping center.

“The Dreamt Land,” published by Knopf, chronicles the development and exploitation of California water, from the earliest farmers to the gold miners to today’s heavily subsidized agriculturalists who managed to expand their plantings in the midst of a historic drought. The book is winning rave reviews. Rolling Stone magazine described it last week as “equal parts Grapes of Wrath and Chinatown.”

Arax, from a family of Central Valley farmers, is a writer with deep ties to the land who has watched the battles over water intensify even as California lurches from drought to flood and back again. In “The Dreamt Land,” he travels the state to explore the one-of-a-kind distribution system, built in the 1940s, ’50s and ’60s, that is straining to keep up with California’s relentless growth.

The book weaves reportage, history and memoir to confront the “Golden State” myth in riveting fashion. No other chronicler of the West has so deeply delved into the empires of agriculture that drink so much of the water. The nation’s biggest farmers —  the nut king, grape king and citrus queen — tell their story here for the first time.

Arax, a former staffer at the Los Angeles Times, is also the author of the best-selling “The King of California,” which won a California Book Award, the William Saroyan Prize from Stanford University, and was named a top book of 2004 by the L.A. Times and the San Francisco Chronicle.

Read more about Arax and “The Dreamt Land” in a story that appeared in Voices last month.