Here’s what Rep. Alexandria Ocasio-Cortez had to say about an incident that happened to me last week in San Diego County at the U.S. — Mexico International Border:

As for the latest example of the “erosion of American civil liberties,” allow me to share with you the full story of what AOC was referencing.

On Friday morning, I was indeed ambushed and interrogated by U.S. Customs and Border Protection, while on my way into Mexico to attend a work meeting at More FM, a local radio station in Tijuana.

Five officers (waiting behind a corner on the pedestrian walkway just before the entrance into Mexico, adjacent to the San Ysidro Trolley Station) stopped me and ordered me to step in a little side cage area.

I asked why I was being stopped. I was told to be quiet and turn around.

I was then ordered to put my hands down on a metal table. As my pockets were emptied by two officers, I again asked why I was being stopped. 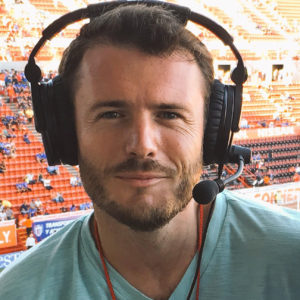 The ring-leader — a RoboCop lookin’ officer named “West” who had a different look to the rest of the squad, like someone who was called in for this specific task of intimidation — sternly questioned me as he continued searching.

West just had that look of a man ready to beat me down in any way he could.

West: So why are you going to Mexico?
Me: Work.
West: Work? What do you do for a living?
Me: Why do you care what I do?
West: I asked you a question. Answer me.
Me: I’m a writer.
West: Oh yeah? Who do you work for?
Nate: Good Lord. I work freelance.
West: Hands on the table.

At this point, Officer West ran both of his hands along my entire waist, twice, and literally rubber-band snapped the waistline of my underwear onto my lower-back, as people walked by and gazed in at the ever intriguing interrogation cage scene.

I clinched, exhaled, and leaned forward, and looked back … to see him smiling.

West: Why you so angry, bro?
Me: Are you serious?

I was then ordered to show my passport, which was of course in my wallet. I reached for the passport.

West: Hands on the table, sir. Don’t make me tell you again.
Me: You just told me to get my passport.

He allowed me to pull the document out of my wallet. As he was bending up my passport card to test its legitimacy and running numbers into a little machine, a young female officer looks at me,

Female officer:  If you just cooperate, this will be over. You need to familiarize yourself with the rules.
Me: Familiarize myself? Why don’t y’all tell me why I was stopped?

West smiled again, only this time even wider.

I quickly removed my shoes, as I simultaneously realized that Amy Winehouse’s “Back to Black” album was still playing faintly out of my headphones, which were still sitting on the table.“Tears Dry on Their Own.” Just seemed eerily fitting.

After searching my shoes with a flashlight, West tossed them at my feet and said I was allowed to move my hands again to put the shoes back on. I paused, and looked him right in the face with my hands on my side.

“You’re free to go,” another officer told me. By then, West and I were staring at one another. He had a look of sweet satisfaction, for some reason. I slowly collected my belongings and put my shoes back on. West still had my passport card. He then pulled out a cell phone and took a picture of it.

“Why did you take a picture of my passport?” I asked.

“For my records,” he answered.

There were so many things I wanted to say and do in this moment. Instead, I took a deep breath and walked away.

As I was standing in line at the Mexico crossing, I simultaneously felt like crying and punching someone in the face. Violated. I thought about American policing of People of Color, and how what I’d just gone through was merely a small taste of what P.O.C. go through on the daily.

If they can do this to me, a 6-foot, 1-inch white male with a passport, and make me feel the range of emotions I felt, just imagine what CBP (and ICE for that matter) can and already do to people with brown skin, people without documentation, asylum seekers, everyday Mexican-American border commuters, etc.

However, this whole ordeal didn’t feel one bit random. It was very strange for five CBP agents to just be waiting to pounce right at that precise time and place. The same place I’ve crossed for the last two months. On the same day of the week, a Friday. At the same time of the morning, around 9 a.m.

As I’m leaving the country! (That detail is critical, as this is simply not a common occurrence.)

Maybe I’m being a bit pretentious in thinking that my recent appearances on the “Only Here” podcast on KPBS, the San Diego NPR station, and my written border coverage — in addition to my three years of work covering the Xolos of Club Tijuana and Liga MX Soccer — would land me on some sort of watch-list for journalists. The list does in fact exist; CBP is reportedly aided by both the U.S. and Mexican governments in attaining a wealth of personal information of anyone deemed to be “disruptive.”)

A journalist colleague by the name of Brooke Binkowski, upon hearing about my story in full, most certainly thought nothing of the sort.

“I really don’t think that shit was random,” she said. “Congratulations, I guess.”

Brooke’s somewhat cynical view of CBP might have something to do with the fact that she has been sent to secondary just about every time she’s crossed in the last two years — usually on the way back into the U.S. — regardless of whether she’s in a car or on foot.

There has been a deliberate targeting, from the Trump Administration and the Department of Homeland Security, of journalists and reporters covering the border, especially in the wake of the Child Separation saga, and November’s refugee caravan from Honduras and other parts of Central America. Not to mention the six reported deaths of migrant children while in CBP custody.

What’s truly terrifying about this personal story is that the “best case scenario,” from a completely selfish point of view, is that the whole incident was indeed completely random.

But then think about that. Think about what West told me: We don’t need probably cause. We can stop and search anyone we want.

This is essentially “Stop and Frisk” on the Frontera. Or “Stop and Grope,” depending on the officer. In addition to unlawful search and seizure, and what would appear to be a blatant violation of the Fourth Amendment, Officer West taking a cell-phone picture of my passport was potentially unlawful, certainly if it was on a personal phone.

Whether it was random or completely calculated, I got theoretically swung at on Friday morning. And they landed one. Hard. For no reason other than to mess with me. But they didn’t knock me out. And, rest assured, they never will. I’m just living my life. This is my home. San Diego. Tijuana.

This is our cross-border community. No wall will ever stop our love.

Thank you for the support. And thank you to Rep. Ocasio-Cortez for bringing ample exposure to a personal story that I knew I had to share, as I knew that it represented something much bigger than myself.

Have something to say about this story? Send us a letter .

Hailing from Watsonville, California, Nate Abaurrea is a writer and broadcaster specializing in coverage of soccer on both sides of the USA-Mexico border. He also loves wine. And tacos.