When organizers at Marjorie Evans Gallery in Carmel asked José Ortiz to exhibit his work there, the renowned Salinas muralist didn’t want to say no. And yet it wasn’t exactly an easy thing to do.

For one, Ortiz’s work tends to be fixed to public walls and other spaces — not readily transportable. For another, he considers the great majority of his art to be collaborative, often accomplished with the help and input of his apprentices from Hijos Del Sol, the nonprofit art program he founded in Salinas more than two decades ago, and where he continues to lead and inspire young artists.

So what people are seeing this month at the gallery, inside Carmel’s Sunset Center, are studies — the canvases that Ortiz created in preparation for doing finalized murals and other pieces.

But there is no doubt that the artist’s soul shines through these initial works, with larger-than-life figures seemingly illuminated from within.

Ortiz explained that his murals and public works are really not his work alone, but a collaboration between him and whoever has commissioned his artwork: “I listen, and that conversation leads to imagery.”

Even if by some chance you aren’t familiar with Ortiz’s name, no doubt you have seen his murals somewhere. There are scores of them in Salinas, where Ortiz has been the most influential creator of public art in recent memory. He has worked with hundreds of children and young adults over the years, teaching illustration, painting and sculpture.

Recently, he worked on a two-year project with the Arts Council for Monterey County and CSU Monterey Bay to paint colorful murals bordering Pajaro Neighborhood Park in North Monterey County, and he co-curates art exhibits and programs at CSUMB Salinas Center for Arts and Culture in the Steinbeck Center building.

Ortiz, who has helped create more than 70 murals in Monterey County, had to reach back in his archives to find the studies for the Carmel exhibit. “Some of them are 10 years old,” he said. It’s the first time in 20 years that his work has been featured in a Monterey Peninsula exhibit — the last time was in 1998 at the Monterey Museum of Art. 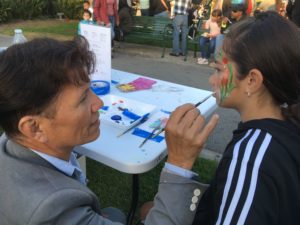 José Ortiz, in the community

Unlike most art exhibits, which are about the artist’s singular vision, Ortiz’s instead reflect the way he has worked with others to create art that is collective and collaborative. Ortiz also says it’s not his ego that’s on display here: “I’m not used to the I, I, I. It’s always us … it takes more than just myself to create these.”

And that’s why Ortiz, when approached to exhibit his work, insisted that four of his young colleagues be allowed to hang their art as well. “I don’t do this work alone,” he said.

José G. Nolasco, Josué David Rubio, Luis Aguilar and Juan Carlos Padilla all have works exhibited in the same show, and they will appear with Ortiz at this week’s gallery reception on Thursday from 4-7 p.m. at the Marjorie Evans Gallery and Chapman Gallery. The event is free and open to the public.

Ortiz is self-taught, an artist since childhood. For many years, his focus has been on bringing art to others through Hijos del Sol and through the presence of public art, bringing color and form to formerly nondescript places. His emphasis on culture, history, tolerance, teamwork and diversity shines from every image.

And yet, he is modest about what he does, describing himself as “more of a working-class person.”

His subject matter is typically simple and direct: mothers caring for children, children embracing animals, people marching together in solidarity, farmworkers in the fields. Bold colors and clean lines draw the eye and tug at the heart.

But what people may not realize is how long it takes to put together such collaborative works, and such large ones. “It’s a great journey when you take on a piece like this,” said Ortiz.

Typically, it takes many conversations with many people, discussing ideas and themes, Ortiz said. Finding out what is needed or desired is the first step. The next is doing a variety of sketches. Then the studies, or mockups, that he does with oil or acrylic paints on canvas are an opportunity to try out these ideas and to refine them further to arrive at the ultimate design.

Some of his work in the exhibit will be a first glimpse of murals he’s working on for the newly renovated pediatric clinic at Natividad. These are based on alebrijes, the fanciful spirit animals carved by Oaxacan artists and made popular by the animated film “Coco.” The murals, expected to be completed in April, are based on ideas from Natividad staff as well as considering others who will be seeing them: patients, parents and other community members.

“When you see the exhibit, it’s a lot more than myself,” said Ortiz. “It’s the imagery and dreams of others. It’s not like painting something for yourself.”

Letter: Ortiz is a local treasure