In 2003, Gena Bentall began to work as an intern for Jim Estes, a researcher at UC Santa Cruz. Her job was to help watch and study endangered sea otters, and as she says, “I never left.” That internship led to grad school and then to working with “pretty much anybody who pays sea otter biologists in California.”

She would sometimes spend more than eight hours a day, seven days a week, watching otters, and one threat to them became clear: The places that are good for otters — bays, estuaries and harbors — also attract people. Too often, kayakers would paddle too close to a raft of otters and cause them to dive or flee.

“My general approach back in those days was just to be very, very angry and try to yell at kayaks from shore,” says Bentall, “which is not very effective.”

Bentall is now the program coordinator for Sea Otter Savvy, a nonprofit that educates people about how to safely be around sea otters. What Bentall saw happening to the otters is a common occurrence in areas like the Monterey Bay, where growing populations of both humans and wildlife meet. Some of the biggest dangers posed by people to wildlife can seem innocuous — a kayaker gets a little too close to a raft of otters, tourists take an extra step to get a hauled-out sea lion into camera frame. But these interactions are anything but harmless. They’re disturbances and stresses that can endanger the very animals that people are there to see.

In 1972, the United States passed the Marine Mammal Protection Act, which makes it illegal to “harass, hunt, capture, or kill” marine mammals like seals, sea lions, otters and whales.

That may sound extreme. After all, if an otter had to change its behavior once a week because of a nearby person, that might not be a big deal, says Jim Harvey, director of Moss Landing Marine Laboratories, but these disturbances add up. 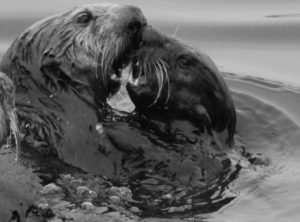 Otters frolic in the Monterey Harbor

“If you had to run 100 yards to get away from the disturbance — a bear or something like that — you’ve now expended some energy,” says Harvey. “Now, did it affect your life long-term? Probably not. But if it was done repeatedly, over and over and over again, then there might be some significant impacts to you.”

Bentall says that in some locations she’s seen this happen 20 times a day to sea otters.

While seals and sea lions have blubber layers that act as both an energy source and insulation, sea otters have none of that. Instead, they create insulation by trapping bubbles of air in their thick fur. That requires five to six hours of intensive grooming, and once that’s done they have to spend eight hours foraging and eating. Mike Harris, a senior environmental scientist and sea otter biologist with the state Department of Fish and Wildlife, says that a mother can expend so much energy raising their pup that once it’s weaned, it doesn’t take much to push them over the edge. It’s called “end-lactation syndrome,” and it can kill mothers even without human interference.

“In California, sea otters are just meeting their basic energetic needs,” says Bentall. “On top of all the other things that they need to do, if they have this chronic disturbance happening — it costs some energy. In some cases, that may be a tipping point, like a mom who is rearing a pup.”

Death by a thousand kayaks

Bentall calls this “death by 1,000 kayaks.” The impacts on seals and sea lions are harder to determine, but still real. In 2015, an El Niño event caused sardine and anchovy populations to plummet, and sea lion populations took a hit.

Marge Brigadier is a resident of Pacific Grove who helps run the Facebook Page “Sea Otters of Monterey Bay” and has also spent many years watching local sea lions for Bay Net, a similar program operated by the Monterey Bay National Marine Sanctuary. She said that these starving sea lions didn’t seem to deter visitors. She watched people walk right up them, “toddler in hand.”

Some days, she says, she spent six hours asking people to move away.

People are equally bold when it comes to local seals. Despite fencing and “No Trespassing” signs, visitors still try and slip through the fence at Hopkins Beach, an important rookery for pregnant harbor seals.

“It’s definitely been an increase (in disturbances) and it’s coming from all directions,” says Kim Akeman, another Pacific Grove resident and Bay Net volunteer who runs both the “Sea Otters of Monterey Bay” and “The Harbor Seals of Pacific Grove” Facebook pages. “More people are buying drones, so that’s one disturbance, more people are coming with their own kayaks, so that’s another disturbance. And then just more people generally in town, who don’t seem to read signs or are just in their own world.”

Even for people who are not taking such boldly illegal steps, it can be hard for a visitor to know how much impact they’re having, says Sean Furey, the program manager at Monterey Bay Kayaks. Many of his customers are there to see these animals, but “the things that seem harmless or cute, like looking at you, are stressors for them.”

By working with Bentall and Sea Otter Savvy, Monterey Bay Kayaks has developed a three-step plan to try to mitigate the impacts to wildlife. One is to foster empathy — Furey says that they talk with every person individually about the fact that, in a kayak, you’re in the animals’ habitat. Second, he gives his customers tips to avoid disrupting otters, such as to paddle parallel to otter rafts, not at them, and stay five boat-lengths away. Third, he reminds  visitors that people are watching. “People don’t always respond to empathy and have to be told it’s the law,” says Furey.

These steps might cut down on the amount of disturbances on a kayaking trip, but Bentall’s goals are much bigger.

Many Monterey visitors are “excited, they’re enthusiastic, they want to get their Instagram photo, their selfie, there’s all kinds of things going on,” says Bentall. “At the bottom of that list of things that they’re paying attention to is what the sea otter or any wildlife is doing and how they’re reacting. We’re really trying to shift that paradigm.”

Bentall is working with agencies, organizations and businesses. She’s speaking at local events (“I try to talk to a group of people at least once a month”) and emphasizing the importance of peer-to-peer communication. She’s seen some promising signs that their work is making a difference, but emphasizes that it’s too soon to say.

She hopes that these ideas — to respect an animal’s space, to think about an animal’s needs before our own desires — will spread enough to become self-sustaining. Eventually, she hopes that she won’t need to worry about how animals and humans interact at all.

“That’s really my goal,” says Bentall. “That’s a pretty lofty goal. There is a lot more work to be done, but I think it’s possible.”

Ian Evans is a freelance environmental journalist who grew up in California and writes about the complex relationships between water, land and policy.