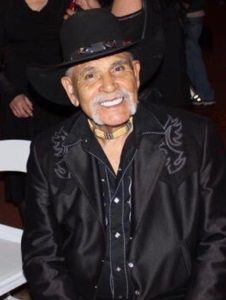 In real life, Morales was a hell raiser not far removed from the character immortalized in director Luis Valdez’s biopic. But to his wife Joanie he was a rock. And to his 10 children, he was simply dad.

Morales died Sunday of cancer in his Watsonville home, surrounded by family. He was 81 years old.

Morales was a fixture around his adopted hometown of Watsonville. Monterey County Supervisor Luis Alejo, a Watsonville native, called Morales a “local icon.”  He noted that Morales was a constant presence at area concerts.

In a candid interview, his wife Joanie and children Bly Morales, Gennie Diamond and Robert Morales Jr. talked with Voices of Monterey Bay about the doting father who stood larger than life and who never quite recovered from the loss of his younger brother almost 60 years ago. The interview has been edited for clarity.

VOMB: I met your father a little over 10 years ago. The one time I met him, I was really taken by, and please forgive me, but how badass he looked the moment I saw him. He had a leather jacket, a really cool belt buckle. A cowboy hat and flames all over …

Bly: (laughs)  That was him. That is a very good description of him.

VOMB: I just want to let you all have your say on who he was and what kind of father he was. What were your memories of him as a father?

Bly: It’s funny, a reporter from the newspaper asked us, “What made him such a great father?” and I’m sitting here with my brother and one of my sisters, and we looked at each other and said “We don’t know!” (laughs). He was kind of a fucking wild man. But for some reason we all adored him and put him on a pedestal that he could do no wrong.

He was just, in my early years, he was a crazy alcoholic who liked to raise hell. But he was perfect in our eyes. You know why? He was real with us. He was 100 percent honest and real and like my brother said, everything he said to us we learned something. He taught us through his harsh honesty.

He would tell us what we had to hear whether it was good or bad. He would let us have it.

Gennie: (He would say) don’t you do what I did.

VOMB: Talk about what these past few years have been like. Any memories that stood out over the past year or few months?

Gennie: The past year was kind of hard.

Bly: He got diagnosed eight years ago with cancer and he had radiation for 16 weeks, four days a week and it was all right for a while. The radiation kicked his ass. And then he felt better and it kind of fell asleep for a little and then about two years ago it came back and we nipped it in the butt (sic) with some treatments and stuff. And this time, it just came back with vengeance and decided to ravish his body.

Honestly, he was never 81 years old for us until about six weeks ago.

Bly: He turned 81 overnight. It was so weird. It was a trip to see him go from 37 to 81 overnight. He fought that shit to the bitter end. He fought and fought and he made us laugh every bit of the way. From what we understand it was probably in his brain and kind of making him a little scrambled. He’d tell me, “My brain is like scrambled eggs.” So when I’d get up and make him breakfast, I’d tell him “Hey Dad, you want your eggs like your brain, scrambled?” (laughs). And he would laugh, and he cracked us up the whole damn time. He didn’t stop. He was ornery and amazing and he knew who everybody was. People he hadn’t seen in years would walk in the door and see him and he knew who they were and see them. One of his friends came in and he hadn’t seen him in four years and he saw him and said “Hey, you look as bad as I do.” (laughs). That’s the kind of guy he was.

But that’s how he showed his love. Our family, we all have this really dark sense of humor and we like to insult each other. That’s how you know we love you, because if we’re nice, you better look out, that probably means something bad is coming. (laughs)

VOMB: Can you give me a little bit about your knowledge of where he was born and raised and his upbringing?

Bly: Dad was born in Los Angeles General Hospital on March 9, 1937. He would tell me a lot about his upbringing. It was weird to hear about Los Angeles. Every time I’ve been there, it’s like a city. But he would tell me about living on a farm, riding his horse. Birthing a cow and he named it Firecracker because it was born on the Fourth of July. And then Ritchie throwing chickens over the trees. It sounded like he was on the prairie in Los Angeles. I’m like ‘What the hell?’

Gennie: And drunks under the bridge. He started drinking when he was 14 years old.

Bly: Yeah. There’s a really cool story he told about when Ritchie died, that he was walking at the levee. The cops didn’t take his car away (after) they pulled him over and he was drunk. And they said “You can’t be driving, you got to park this car.” So he started walking with his bottle of Thunderbird or something. And he said this dog followed him the whole way, and it would not leave his side. The dog just would not leave his side. And he said he had to jump a fence. And he threw the dog over first, and he jumped over and the dog followed him, followed him, followed him. And he truly believed that that was Ritchie.

VOMB: Now that you’re talking about your late uncle, how often would he talk about him?

Bly: Oh gosh. It was weird because he could not speak of Ritchie, we’re coming up on 60 years that Ritchie has been gone, and he could not speak of him without tearing up. Without getting emotional. I thought “That’s kind of weird dad, what the hell? It’s been 60 years.” But he had such, he missed him so much.

Gennie: He had to speak of him every single day. Somebody asked about Ritchie.

Bly: And now that he’s not with us, I was like oh my sogh, that’s what our life is going to be like. People are always going to ask (about him). He touched so many people’s lives. Honestly. My sister was saying how we would wake up in the morning and there would be some random person sitting at our table eating breakfast and we’d be like “Who the hell is that,” and my mom would be like, “Oh, that’s just some random guy we met in the parking lot at the grocery store. He needed a couple of bucks and Dad decided to bring him home and feed him and smoke pot with him. We’re going to take him to the bus station right now.” I’m like, what the hell? I can’t tell you how many times that’s happened (laughs).

He had a heart. Everybody thought he was a badass but he was a big teddy bear.

Q: I want to talk about the legacy of the movie. Your dad in the movie, your dad was on equal terms with the Ritchie Valens character.

Bly: We were just talking about that. … for people, it was like level ground. People loved Ritchie and they loved Dad just the same… The regular people could relate to Dad. Like he was just a regular guy with real problems. Ritchie was a rock star. How many people can be rock stars?

VOMB: I thought it was wonderful the way Luis found a way to balance it out. For you guys to have that gift of being able to see your dad as a legend in Hollywood circles. Was that hard to grow up with?

Bly: For us, he was just our dad. It was weird for us because we’d go out to functions for Ritchie Valens Park and everybody would run up to him and say can I take pictures, can I have your autograph and we’d look at them like, “That’s just our Dad.” He never carried himself like that.

VOMB: Any plans for a public ceremony?

Bly: Yeah, we’re going to have a life celebration because I tell you what, my dad hated funerals. He wouldn’t even go to his own mother’s. He stood outside in the car. So we’re not going to do him like that. We’re going to have a huge-ass party like he asked us to and we are going to celebrate his life and let everybody come and share their memories because everybody has one. We’re looking right now at the fairgrounds in Watsonville in the next couple of weeks…. If we tried to do something private, it’s not going to work. We had an 80th birthday party for him and it was on the hush-hush and we had 250 people and there was security at the gate… And we raised hell at that party.

As one of my friends told me on Instagram, I feel sorry for the guy waiting for him at the gates of heaven. He’s about raise hell for them.

VOMB: Is there anything we haven’t covered that you want to make sure people know about your father?

Gennie: Bob’s most heartfelt thing he told people, because, years ago, when Ritchie was leaving Dakota… him and Bob had fought over this dress for Nana, or whatever it was and Bob didn’t go. He always went every time to take Ritchie to the airport. And that time he didn’t go because they were mad. And then Ritchie didn’t come back home. And he always would tell people “Whoever you love, whoever you care about, be sure you tell them how you feel, because, maybe, you won’t have another chance.” And he always remembered that.

Bly: Yeah. When he went to the hospital a couple of weeks ago, he only stayed one day. We asked him, “What do you want to do, Dad? Do you want to stay here or do you want to go home?” And he was like, “Take me home.”’ And that’s exactly what we did. Me and my niece sat on the bed and he looked at both of us and he said, “You know what, girls? I’m going to tell you something … Money don’t mean shit! Do you hear me? You know what matters? Love.” I said, That’s right, Dad, and we kissed him and loved him. And our family is full of love. The last two weeks, there’s been more love here than I could ever imagine, and that’s exactly what he wanted to be surrounded with, and that’s what he got when he decided to make his exit to Rock ‘n’ Roll Heaven.