Update: Plans are moving apace to stage a protest around the appearance of Joe Arpaio in Carmel Valley next week. The event starts at 10 a.m. Sept. 13 at the Palo Corona Regional Park.

(Note that most GPS systems will show the entry to the Palo Corona park is off Highway 1, which is true. But the entry to the section of park where the luncheon and protest are scheduled is off Carmel Valley Road.) 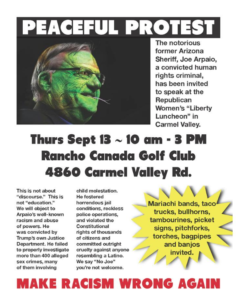 Organizers of both the Arpaio fundraiser and the protest have been meeting — separately — with sheriff’s officials to establish ground rules for what is a rather unusual location for a protest expected to draw hundreds of people.

Siobhan Warwick Griffin Wolfe, a Carmel Valley resident who has emerged as the primary organizer of the protest, said that deputies have set aside an area for the protest that won’t block roads but that is fully visible. Wolfe said she has secured a taco truck — as both an ironic political statement directed at Arpaio and as a handy way to feed those who show up to protest. She is also still trying to secure a mariachi band to join the protest.

A flyer publicizing the protest notes that “mariachi bands, taco trucks, bullhorns, tambourines, picket signs, pitchforks, torches, bagpipes and banjos” are all welcome at the site.

Joe Arpaio is coming to town. The disgraced former sheriff of Maricopa County in Arizona, convicted of criminal contempt by a federal judge and pardoned by President Donald Trump, will be the headliner at a Monterey Peninsula Republican Women Federated luncheon in Carmel Valley on Sept. 13.

As with everything associated with Arpaio, his scheduled appearance in Monterey County has stirred great passion. Local Democrats and progressives are planning a big protest. And while they are still working out the details, there’s been talk of using taco trucks and mariachi bands as props.

The event — and the expectation that it will draw crowds of hundreds of protesters — has unexpectedly thrown the Monterey Peninsula Regional Park District into the spotlight. The Arpaio visit is taking place at the old Rancho Cañada Golf Course clubhouse. The clubhouse and golf course was recently transferred to the park district, which renamed the site Palo Corona and which is converting the course back to a natural habitat.

The Republican women’s group has been holding its monthly luncheons at the clubhouse for years, a tradition they’ve continued after the conversion. The clubhouse operations are being contracted out to a private company, so park district officials had no idea Arpaio was showing up until Thursday. They obviously can’t stop the event, but they also can’t stop any public gathering outside the hall.

THE GUEST OF HONOR

The 86-year-old will be in Monterey County two weeks after sustaining a humiliating defeat in the Republican primary for U.S. Senate on Tuesday.

Arpaio emerged as a controversial figure for brazenly stripping criminals of basic human rights while they were lodged in what became known as “Tent City,” an outdoor jail where inmates wore black-and-white striped uniforms and pink jail-issued underwear. He referred to himself as “America’s Toughest Sheriff.” At the height of the Obama-isn’t-an-American mania that gripped the Republican Party, Arpaio sent an investigator from his office to Hawaii to look for President Barack Obama’s birth certificate.

Maricopa County spent millions of dollars to pay off claims and legal damages brought by citizens against Arpaio’s office, including more than $1 million to a man Arpaio framed in 1999 by charging him with a plot to assassinate the sheriff. By 2015, the county and its insurers spent $44 million for damages and other expenses in one particularly egregious racial-profiling case. In 1995, he reinstituted prisoner chain gangs; a year later, he expanded the chain-gang operation to include females. Then, in 2011, a U.S. District Judge issued a preliminary injunction ordering Arpaio and his deputies to stop targeting Latino drivers. After the injunction was issued, Arpaio hired a private investigator to investigate the judge, G. Murray Snow. He was eventually convicted of contempt after defying the injunction. The judge, G. Murray Snow, ruled that Arpaio’s office had engaged in racial profiling.

By the time Arpaio was convicted of contempt, voters in Maricopa County had already voted him out of office, ending his 24-year tenure as sheriff.

Trump showed up in Phoenix, where Maricopa County is located, in August 2017, for a rally that featured Arpaio. He pardoned the sheriff several days later, calling him a “great American patriot.”

And now Arpaio is coming to Monterey County, where he will be feted and treated like a hero.

Maricopa County spent millions of dollars to pay off claims and legal damages brought by citizens against Arpaio’s office, including more than $1 million to a man Arpaio framed in 1999 by charging him with a plot to assassinate the sheriff.

Karen Reissman, current president of the organization, said Arpaio was invited in the spirit of fostering “healthy” discussions.

“Obviously, there are opposing viewpoints, but (the event) is for people to be educated in different issues, to be educated about immigration reform. Everyone has a right to their opinion, this is what this country is all about,” she told Voices.

Reissman is aware of the controversy but feels that, if people “refrain from being hostile (and instead are) open minded and listening, we’ll foster a healthy environment. As long as people can be open minded and having a discussion without getting emotional or having too much animosity — if they listen, they can learn.”

Reissman is a senior living adviser for A Place for Mom, which helps people find nursing or assisted living care for family members. Secretary Marilyn Galli is a docent for the Pacific Grove Museum of Natural History and a former saleswoman for Pier 1. She and another officer, Barbara Smyth, are involved in Public Water Now.

The group’s luncheon coordinator is Cindy Norlin, who is active with the Pacific Grove Chamber of Commerce and who supports Carmel mayoral candidate Dave Potter and Monterey Councilman Ed Smith.

“Obviously, there are opposing viewpoints, but (the event) is for people to be educated in different issues, to be educated about immigration reform. Everyone has a right to their opinion, this is what this country is all about.” Karen Reissman, president, Monterey Peninsula Republican Women Federated

Word spread rather quickly through social media last Thursday. The troops were rallied. With so many different progressive political organizations in the county, it was difficult to determine who would be in charge and how things were going to work exactly.

By Tuesday, it was clear that Siobhan Warwick Griffin Wolfe had things under control. She created a Facebook page, No Arpaio, and she started talking to all the right people, asking all the right questions about how a peaceful protest might actually be carried out in a relatively remote rural area of Carmel Valley. She’s in contact with the park district manager and she’s working through potential permit issues with the county.

But she’s lived in Carmel Valley for 31 years, and she says she’s livid at the thought that such a polarizing public figure would be showing up in her backyard. “Nothing like this ever happens here,” she said. “I think of him as a Nazi. He bragged about running concentration camps, he forced female prisoners to be shackled while they had their babies (and) people died in his jails …”

Reissman, from Republican Women Federated, said she will reserve judgement on Arpaio until she’s heard him speak. “There are a lot of things (being said) that are not true,” she said. “They’re listening to one point-of-view in the media. If they really listened to the truth of what happened… He’s just concerned like our president is about illegal immigration, about the amount of crime. He has the same concern that our President does, that a lot of people do. It’s important to educate themselves rather than just hear one side without hearing all the facts. A lot of anger is based on things that are not true.”

Nevertheless, Wolfe said she has already found the taco truck. She hopes to secure a PA system and a mariachi band, but she said she’s also working with the county so that “some pearl-clutching Republican woman doesn’t call the sheriff on us because we don’t have our ducks in a row.” Park district officials have told her that protestors can assemble near the clubhouse, as long as everyone is peaceful. Palo Corona is public property, after all.

She says the learned that the clubhouse where Arpaio will appear has a capacity of 150. She hopes that at least twice that many will show up to protest.

"He bragged about running concentration camps, he forced female prisoners to be shackled while they had their babies (and) people died in his jails …” Siobhan Warwick Griffin Wolfe, Carmel Valley resident

The “2018 Central Coast Liberty Luncheon!” includes a nice selection of top-flight defenders of President Trump who will serve as the opening act for Arpaio. They include:

Charlie Kirk, an up-and-coming whippersnapper on the right who boasts of appearing on cable news programs more than 600 times to defend conservative ideals. He founded something called Turning Point USA, which is not affiliated with the drug rehabilitation center in Santa Cruz County or several other “Turning Point” drug centers throughout the country. Most recently, Kirk complained that “Antifa” protesters made him feel badly when they shouted at him while he was dining at a Philadelphia restaurant. Kirk blamed the incident on Rep. Maxine Waters.

Adelle Nazarian is a politics and national security reporter for Breitbart News. She writes about conflicts in foreign lands — Yemen in the early afternoon, Germany 18 minutes later — yet she still has time to publish such authoritative stories as her Aug. 15 story headlined “‘San Fransicko’ Announces ‘Poop Patrol’ to Clean up Revolting, Feces-Covered Sidewalks.” She had been a Fox News correspondent for three years, until 2009, and worked for a spell in men’s fashion at Ralph Lauren. She is also the California program director for The Henry Jackson Society, a think tank out of England that supports “a forward strategy – involving diplomatic, economic, cultural, and/or political means — to assist those countries that are not yet liberal and democratic to become so.”

Julienne Davis is a model and actress, probably best known for her role as Mandy in “Eyes Wide Shut.” A year ago she wrote an essay for the Fox News website in which she bitterly complained that fellow actors treated her poorly after she outed herself as a conservative. “Members of the Hollywood left don’t want to listen, discuss, or even see a dissenting viewpoint that challenges their own comfortable echo chamber,” she wrote. “It’s ironic that an industry that constantly talks about diversity is so judgmental, hateful and utterly rigid in its groupthink.”