Stress for some high school seniors intensifies when they’re expected to make one of the most important decisions of their lives: picking a college. In the Salinas Valley, 29 students kick-started the college selection process with an 8-day field trip in July to the East Coast.

The whirlwind journey was hosted by the Salinas Valley Ivy League Project, a program directed by Ruben Pizarro, a teacher who is also co-founder of the Dream Academy in Salinas. Pizarro said the trip gave students a first-hand look at what is expected at prestigious universities.

“The odds are against you, for sure, but the odds have been against a lot of people and they’ve been able to make it,” he said. “And you are going to beat them. And someday you will see that the hard work was worth it.”

Pizarro said the field trip served as an informative opportunity for students with dreams of going to an Ivy League university. The students visited places like Harvard, Brown, MIT  and Columbia — nine campuses in all. They even made quick stops to the Capitol Building, the White House and the Lincoln Memorial in Washington, D.C., while they were passing through en route to Georgetown University.

The Ivy League program was founded in Parlier (near Fresno) by Martin Mares in 1992 to give economically disadvantaged student the motivation to apply to more prestigious institutions. Currently there are six programs in California, including Monterey County.

Pizarro, a former attorney, has taught AP Government and Economy at Alisal High School for 18 years. In addition to teaching and directing the Ivy League Project, he also leads the Dream Academy, a Salinas organization created to empower high school students.

Pizarro, who said he was once a troubled kid with no prospects, managed to get through high school, went to college and earned a law degree from the University of Santa Clara. He was a legal-services attorney for low-income residents for years before deciding to transition to teaching.

“I think since my parents came from Durango, Mexico, its always been in my mind to help immigrant families,” he said.

Pizarro got involved with the Dream Academy in 2009 after he and 33 Alisal students raised funds to travel to Washington, D.C., to witness President Barack Obama’s inauguration. The idea did not end there — the Dream Academy now encourages high school students to attend college. The Ivy League Project is a separate program, but he cross-promotes it among his Dream Academy students.

In early July, the latest group of students spent about a week on the East Coast, visiting elite campuses and listening to admissions directors. 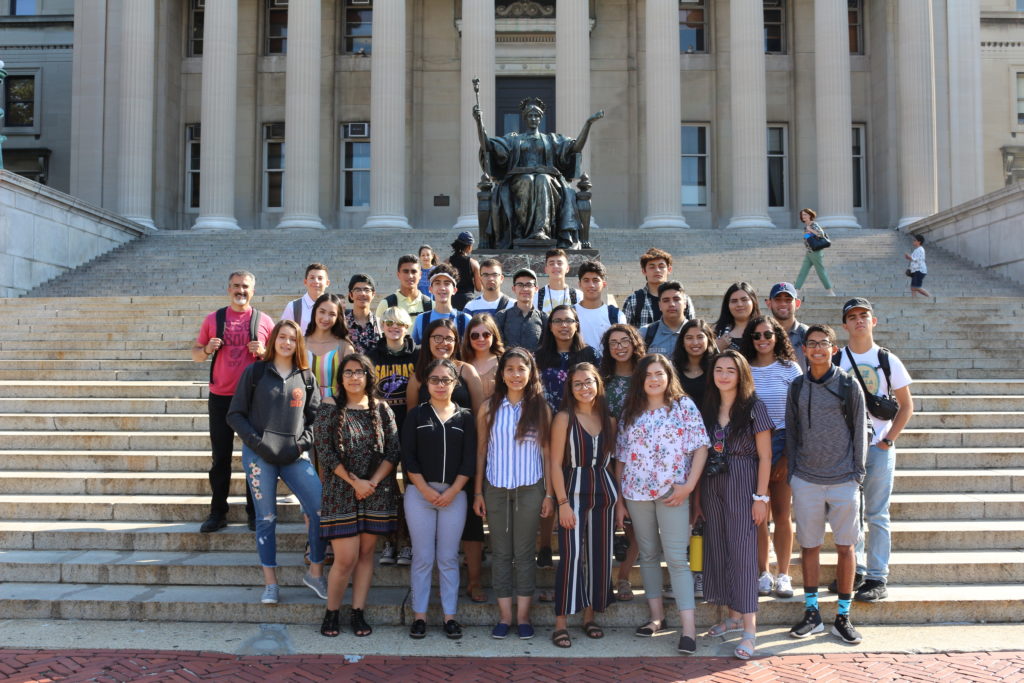 Nayeli Gomez, a senior at Alisal High, was one of the fortunate seniors who this year had the opportunity to travel to the East Coast. “I have learned that a lot of these campuses offer great financial aid packages,” she said. “I was particularly impressed with Princeton, which is also the school I have liked the most thus far.”

The trip helped students learn more about financial packages offered by these universities. Students often don’t get enough information in their high schools about financial aid, and do not apply to Ivy League schools due to fears of not being able to pay for their education at the more expensive private universities.

During an informational session at Princeton, Gomez learned that around 80 percent of its students graduate debt-free. “Most of the money the school receives actually comes from donors and alumni and not from tuition,” Gomez said.

With the dream of one day majoring in bioengineering, Gomez said she hopes to attend law school after her undergraduate education. Coming from a low-income family, Gomez saw the Ivy League Project as an opportunity to learn more about prestigious schools.

Virginia Isarraras is another participant of the Salinas Valley Dream Academy who traveled to the East Coast in July. “Despite having already gone to the East Coast once, the opportunity to visit multiple Ivy League schools was something I could not let go by,” she said.

The Dream Academy was founded with the purpose of empowering youth as they travel along the path of pursuing further education, Pizarro said, and the annual field trips have been meeting and exceeding goals.

“Don’t allow fear to limit your options,” Pizarro said. “Fear of leaving home, of not living with your parents. Fear of not being loyal to your community. Make sure that does not limit where you apply.”

Jose is a junior at Everett Alvarez HIgh School and does play-by-play for Alisal High broadcasts on MCAET TV. He also volunteers at Salinas Valley Memorial Hospital and is a 2017 graduate of the Monterey County Youth Media Project.