Democrats like to advocate for the distribution of wealth, and party politicos from the California Democratic Party joined their friends in Pebble Beach this weekend to spread lots of it.

Along with AT&T—their corporate BFFs—Democratic politicos from around the state gathered with lobbyists, captains of industry and others for a schmooze-fest known as the Speaker’s Cup at Pebble Beach. Over the past 21 years, the event has become a hallowed but top-secret weekend for California Democrats in Del Monte Forest.

The Speaker’s Cup is a fundraising affair for the California Democratic Party that includes a weekend of golf, spa treatment packages, fraternal camaraderie, free gifts and at least one VIP reception.

Maybe our timing was bad, but we know they were out there somewhere.

We know because our friends at CalMatters, another nonprofit news operation that covers Sacramento, sent us a copy of the Speaker’s Cup invitation. 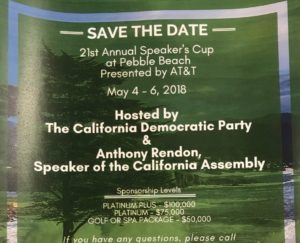 The save-the-date invitation indicates that, as usual, the event is hosted by the California Democratic Party and by the state Assembly Speaker, who this year is Assemblyman Anthony Rendon of Los Angeles. The speaker traditionally hosts the three-day party, hence the name of the event. The invitation shows that the weekend is “presented” by AT&T.

AT&T has sponsored the resort weekend fundraiser for at least a decade.

Voices of Monterey Bay left messages with the state Assembly Democrat committee, and we were told Monday morning that someone would return our call. As of Tuesday, calls had yet to be returned. Messages left to several other Democratic politicians in the state, including the office of Assemblyman Mark Stone, who represents Pebble Beach in the Assembly, and Sen. Scott Wiener, who is currently sponsoring a bill that AT&T vehemently opposes (see below), also were not returned.

Campaign disclosure statements on file with the California Secretary of State show that AT&T has ponied up $125,000 to Pebble Beach Resorts each of the last three years to secure the course and facilities for the Speaker’s Cup event. That’s not including anywhere between the $67,000 and $99,600 that AT&T spent elsewhere for “gifts” it presented to Speaker’s Cup participants. (Over the years, the gifts have reportedly included GoPros and luggage; in 2013 AT&T spent almost $100,000 at the Apple Store, picking up iPad minis and other gear for participants.) And it does not include the cost of a VIP reception at Pebble Beach, which each year sets AT&T back about $7,000.

The California Democratic Party last month sent a $600,000 check to Pebble Beach Resorts for the fundraiser, according to disclosure statements. It was, to date, the largest single expenditure by the California Democratic Party fund since January 2017, though the party did send two separate checks, totaling $1.14 million to the Lodge at Torrey Pines in San Diego, for another fundraiser. (That golf-themed fundraiser, held in March and not to be confused with the Speaker’s Cup, is called the Pro Tem Cup and supports Democratic senators.)

The Speaker’s Cup invitation offers three different sponsorship opportunities, ranging from the $100,000 “platinum plus” level to the $50,000 “golf or spa package” level.

Over the years, the tournament has been an off-limits affair, which means that random constituents aren’t welcome. Basic information about who gets to schmooze with the politicians and how much money is raised seems to be a top secret. Campaign disclosure statements don’t help, because political parties are not required to report whether donors’ contributions were sent as part of specific fundraising events, like a golf tournament, or as random acts of beneficence.

The secrecy could be partly the result of AT&T’s active participation. Certainly, AT&T spends millions of dollars every year to influence legislation in California, and it spreads its wealth generously to both Democrats and Republicans.


AT&T’s participation comes at a time when the state legislature is considering a net-neutrality bill to counteract loosening of federal standards. Telecommunications companies, including AT&T, strongly oppose the California proposal.

AT&T’s participation in the Speaker’s Cup this year comes at a time when the state legislature is considering its own net-neutrality bill to counteract loosening of federal standards. Telecommunications companies, including AT&T, strongly oppose the California proposal. That legislation was introduced by Sen. Wiener.

Last year, in the months following the Speaker’s Cup, AT&T won legislative approval of a bill that would have streamlined the telecommunication industry’s ability to add small cell facilities to existing towers in California. Gov. Jerry Brown foiled that with a veto, saying the law would have taken control away from cities and counties.

While the weekend’s festivities are shut off from the public, occasional political gossip does emerge. In 2013, for instance, when Assemblyman John Perez of Los Angeles was the Assembly speaker, Perez ordered Assemblyman Tom Calderon off the premises and refunded his $20,000 entry fee, which had been paid by Pacific Hospital of Long Beach. At the time, Calderon was under investigation, and he was ultimately sentenced to a year in federal prison for laundering bribes taken by his brother.

The refund of the entry fee, reported by the Los Angeles Times based on campaign finance records, is evidence that lobbyists and others underwrite the entry fees for participating politicians who attend the golf party.

But even that payment was convoluted, an indication of the cumbersome and confusing campaign-finance accounting allowed in California. Pacific Hospital had paid for Calderon’s entry fee by sending the $20,000 check to the Del Norte County Democratic Party, which was one of several Democratic committees that accepted checks that year for the Speaker’s Cup.

A year earlier, a couple of reporters from the Los Angeles Times reported that the Speaker’s Cup raises more than $1 million annually for Democrats. The Times reported that, at the 2010 event, both the Speaker and the president of AT&T drove around the course together in a golf cart so they could shake hands with every lawmaker, lobbyist and other VIP in attendance.

“The Speaker’s Cup is the centerpiece of corporate lobbying strategy so comprehensive and successful that it has rewritten the special-interest playbook in Sacramento,” according to The Times. “When it comes to state government, AT&T spends more money, in more places, than any other company.”