Stitch Rodriguez Campos says he grew up a doodler, and his doodles were rather strange. Over time he ran across artwork that featured melting watches and fire-breathing eyeballs and a mosh of human appendages and unlikely machine parts and leaping furniture and colors that hadn’t been invented yet. And he learned that the rattled brain that produced this stuff was not only famous, but also was celebrated as a genius.

So Stitch, raised in King City and Marina, was able to put a label to his doodles. Surrealism. Abstract. He was a Salvador Dalí type of guy.

Now 28 and a self-taught artist who got fully serious about it seven years ago, Stitch insinuated himself into the still-developing resurgence of Dalí popularity in Monterey County two years ago. 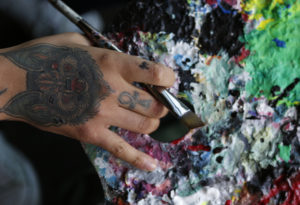 Other than a wild and opulent and exotic party thrown by Dalí at the old Hotel Del Monte in the 1940s that remains a mythical local event, the surrealist’s connection to the Central Coast is sporadic. Dalí came and went at intervals, over a seven-year period, to work on his autobiography. Fast forward about 70 years, and an obsessive fan and collector named Dmitry Piterman, from Pebble Beach, offered up his huge collection of Dalí works (557 lithographs and etchings, and 230 originals) to the Monterey History & Art Association. The association, which ran a drab local history museum at Custom House Plaza, happily took on the collection. The new museum, called Dali17, drew about 50,000 visitors in its first year. And Stitch Campos could actively channel the Dalí that moved him.

Last summer, he orchestrated the creation of a 28-foot mural that now hangs over the front lobby of the museum.

Voices spoke with Stitch last week. The question-and-answer has been lightly edited for clarity:

What is your relationship with the museum? Are you an artist-in-residence, or what?

When this place first opened, I came on by and wanted to be a part of it somehow. And my partner and I had this idea that we should make merch for this museum and host these art classes. They kept us in mind and we kept in contact and one thing led to another. We had this great opportunity to start having these art classes one day a month and then I was hired to do the mural on the one-year anniversary.

Who are you, and where do you come from?

I’m 28 years old and I’m a Marina-based artist. I’ve been painting for about seven years now and Salvador Dalí has always been my main influence. He’s been my favorite. He’s the godfather of surrealism and he’s just my all-time idol. His paintings are unlike anyone else’s.

This museum had been planned for a while. So you heard about it, and then what? You must have felt it had your name written all over it.

I kept hearing about it, and reading about it and it got me super-super-excited, so right away, from day one, came in and had meetings with staff members and presented them with all these ideas. And so here I am.

Where did the name Stitch come from?

My real name is Steve. I used to work with Spanish speakers at a restaurant in Davis who couldn’t pronounce Steve and would say “Estich,” but with a Spanish accent. Later I moved to King City and did some field work and (co-workers) had the same problem. I figured … if you can’t beat them, join them, and I turned into Stitch. It actually sounds good, especially for an artist’s name.

What is it about Dalí that gets you worked up?

His paintings speak to me, unlike any other artist. As a kid I was always drawing these surrealistic doodles and it wasn’t until I discovered Salvador Dalí that surrealism was actually a genre. And so his artwork spoke to me unlike any artist ever had. To hear about him coming here was a bonus.

I’m a self-taught artist and I’ve been concentrating on it for the past seven years. Seven years strong. I’ve been instructing paint classes for four years and my partner (Stephanie Ornelas) and I have my own business called Darls & Darls Fabrications. We do screen-printing and art classes and we started off refurbishing furniture. That’s how we started and now we’ve branched off into bigger projects.

What was involved in putting together the mural?

We wanted to do something really extravagant for the one-year anniversary of the museum. The staff members and I came up with the idea of, well, why not have a mural painted and have the community members of Monterey help. It would bring more publicity to the museum and it would be a great, fun time. I had it posted out front, on plywood, and I stenciled a 28-foot mural on canvas scroll and we used interior acrylic water-based paint.

(During the event) we had all ages here, from 5 years old to 80. And we had about 50-plus people come and go.  It wasn’t that difficult to manage them. I’m experienced in handling people painting. The most I’ve led is 500 people over seven hours for a class in Pleasanton.

After that event I took the canvas home and worked on the final touches in my studio. It took about 90-plus hours in the span of three months.  We came in with a scissor lift, made a custom wood frame, and hung it up. It took about 10 hours to hang it up: two nights, five hours each. That thing is really heavy and to hoist it that high, two stories, was a challenge.

What are your other duties here?

We do a monthly paint class. All materials are provided and I’m a lead instructor. It’s a step-by-step process and it’s a fun time. We have a live music, we have wine vendors and we do a raffle. Sometimes we sell out, anywhere between 15 and 40 people. Every month is a new Salvador Dalí-inspired piece. People like getting their hands dirty with paint.

I saw you were recently invited to make a presentation at your old middle school. That must have been different, especially since you flunked out of the art class there.

I was invited to be a part of Vista Verde Middle School’s career day (in Greenfield). It was a school I attended and graduated 8th grade in 2003. The then-Stitch is very much like the now-Stitch in the sense that my taste in things hasn’t changed but in fact has gotten more in depth in all the weird shit I’ve always been into. Now I’ve been making those dreams come true. I have no limits. Being a kid at heart and keeping your imagination and creative spirit alive. Spreading positivity to others is where I have found true bliss.