By Mary Duan
Photographs and video by David Royal

Susan Ragsdale Cronin walks out the back door of her little Del Rey Oaks home into a huge yard. She pauses to stop a handsome Siamese mix named MoShou from following her into the yard. She walks past her greenhouse, where she’ll start seeds in a few weeks, past myriad tomato plants still loaded down with red and orange fruit (“They are so confused by this weather,” she says) and past the chicken house and its kill cones, which she recently used to dispatch her aging flock. She keeps going down a gentle dirt slope—the yard is huge—until she reaches a set of TK garden boxes surrounded by deer-proof fencing along the back line of her property.

This is where, in the spring, Cronin will plant her crop of cannabis sativa. She says it will have only trace amounts of THC (the chemical compound in cannabis responsible for a euphoric high, dontchaknow, according to leafy.com) and larger qualities of other cannabinoids. The crop goes into the ground in March, will be harvested in October or November and then Cronin will use proprietary extraction techniques to make tinctures, teas, salves and balms from the plants and their roots for use in pain relief, stress relief and alleviating insomnia. To keep neighbors from being bothered by the smell, she’ll also plant a large row of organic hops, which acts as physical and odor cover for the cannabis she’s grown in this spot for the past two years.

“I’m having luck with the CBG isolate from hemp for shingles, rheumatoid arthritis (and) chronic pain. It works well for inflammation, so it’ll be one more tool in the toolbox,” she says. “It won’t get you high, but it’ll help with so many issues.”

Back in her kitchen, Cronin hands a visitor a cup of ginger-lemon tea, sweetened with a blob of honey from the bees she keeps near the fence line. Then she hands me bottle after bottle of the things she makes using the cannabis she grows. There’s her Earth Lady Functional Botanicals brand of pain relief salve, a daytime pain relief tincture, a sleep-inducing tincture and a tiny bottle of what she calls “liquid sunshine”—a mood elevator that won’t get you high—all professionally packaged, all with the requisite warning labels admonishing users not to drive or operate heavy machinery under the influence.

Cronin has been wholesaling her wares to Monterey Bay Alternative Medicine, creating a successful cottage industry in the process. But having a retail location to sell her products may be a thing of the past. As full legalization for adult recreational use kicked in on Jan. 1, a change in rules means leasing or building a commercial manufacturing space and navigating an onerous and expensive licensing system, the rules for which are laid out in an 86-page document titled “Emergency Regulations for Cannabis Manufacturers.” (Emergency, because, the state didn’t quite get its act together in time for legalization to kick in and have permanent rules in place. Those are due to come in a few months.)

She could tackle process, she says, save for the lack of one thing: funding. Between building out or leasing manufacturing space, obtaining the permits necessary to launch and hiring 24-hour security to police the location, one attorney told her she could spend upwards of $500,000.

“I can’t put my family at that kind of financial risk. I don’t have the money to jump through the hoops they need me to,” she says. “I’m frustrated because I see this as a mission from God. 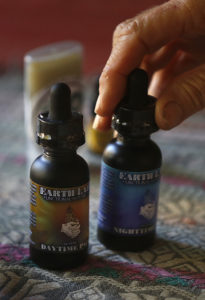 Cronin’s work may start off in her backyard, but she isn’t merely a backyard cannabis warrior. She has a degree in horticulture from Cal Poly-San Luis Obispo, reads biology abstracts for fun and has been immersed in plants and plant science most of her adult life. She studied Chinese medicine too, but cannabis was off her radar because a teacher told her the only value the plant had was in its seeds, which are high in fat and good for digestion.

There’s also this: “I did some pot in college and I got bronchitis, so I was like, ‘ick,’” she says. It stayed off her radar, in fact, until her chiropractor recommended at the end of 2015 that she get a medical card and go to a dispensary to get CBD oil to alleviate knee pain. She ended up at Monterey Bay Alternative Medicine in Del Rey Oaks and there met a York School graduate named Tyler Licata.

He’s the dispensary’s marketing coordinator and a chronic-pain sufferer who turned to cannabis after a crushed vertebrae in his neck went undiagnosed and led to an opiate addiction he struggled with for years.

Tyler, driven to lose weight and possibly become a competitive powerlifter, was in the middle of a session at the end of his senior year of high school in 2009 when he heard a loud crack.

“I realized something was seriously wrong,” he says.

The loud crack was his C7 cervical spine fracturing. At the hospital the next day, he was told it was stable and would heal on its own. That healing, of course, never came.

But the prescription opioids did. And so did the anti-anxiety meds, the sleeping pills and the stimulants to counteract the effects of the sleeping pills. And his spine was so destabilized that within a few years, he had suffered two more fractures.

“I started doubting life. My motivation went away and the drive I had disappeared because of the pain,” he says. “And it’s the same story for me as with every other opiate user. The tolerance begins to increase and increase and they put me on more and then stronger pain medications. I was on 25 different drugs, some to treat my condition and some to counteract the side effects of the treatment.”

The law as it exists now will make it impossible for smaller growers and manufacturers to compete legally.

An accidental overdose of prescription meds served as a “huge wake-up call.”

When the dispensary opened, Licata thought he should give cannabis a try. If he could find pain relief and a way to reduce the resulting anxiety—and the need for opiods—it might be worth a shot. Not long after becoming a patient there, he also became an employee.

And he was at the counter when Cronin came in.

The two teamed up after Licata learned she was there also seeking pain relief, in her case, following a car accident. In his year-plus at the store MBAM, Licata had learned which cannabinoids would help keep him functional, and employable, while delivering pain and anxiety relief. Cronin was a neophyte about cannabis with deep knowledge about plants.

They met at her house and began planning. Licata made a tincture to show her what it entailed, and over the course of time, they tried dozens of formulas.

“We started experimenting, trying to customize blends for day, night and something in between,” he says. “We reformulated at least 100 times before we came to a blend that we called our anytime blend. You could still think clearly on it. It didn’t make me feel euphoric, but it made me feel very normal. And one day I felt the drive returning to my body.”

Licata helped Cronin launch Earth Lady, and says the products became popular sellers at MBAM. Before Jan. 1, MBAM the dispensary bought out Earth Lady’s remaining stock, about $10,000 worth of product, which they’re allowed to sell through February.

So it is that Earth Lady—and Cronin and Licata—find themselves in a bizarre area of cannabis legalization. Laws have kept the largest investors out of the market for now, owing at least in part to the lack of federal legalization, according to Rosalie Murphy writing in The Desert Sun. But the law as it exists now will make it impossible for smaller growers and manufacturers to compete, at least legally. As Murphy writes, of the estimated $30 billion in annual consumer spending on cannabis, $24 billion is spent on unregulated products, according to a report from the New York-based research firm The Cowen Group.

“This is the problem. Because of the permitting systems in place, we literally can’t afford it,” Licata says. “By imposing limits and forcing products off the shelves, (the legislature) has done a disservice by making it into another commodity. That’s what I want to see reversed. I want to see people who can obtain permits, even temporary ones, at accessible prices.

“We shouldn’t have to sell out to be a brand,” he adds. “That was never our intention.”

Cronin seems optimistic about the future, even while her ability to wholesale has been placed on hold. She’s bracing for the arrival of Big Pharma into a market Big Pharma will try to control, because, as she says, she believes cannabis stands a chance of putting them out of business.

As for Earth Lady?

“I’m not afraid that it’s not going to work out,” Cronin says.

“Maybe not this year but in the next couple of years. In the meantime, I’m going to keep doing research. My big thing is access.I want people to be able to get it and I don’t want them to be without it.”