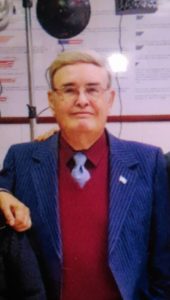 Editor’s note: This story has been updated to include funeral service information.

Crecencio Padilla, a pioneering civil-rights activist in Monterey County, died in his Prunedale home this morning, according to his family. He was 82.

“Our community has lost a great man and a leader of our Latino community,” his brother Cosme posted on Facebook. Cosme Padilla said that Crecencio had been recovering from heart surgery.

Padilla, a longtime North Monterey County resident, was the founder of the local League of United Latin American Citizens, in Castroville, after an incident at a middle school in 1971. At the time, a student delivered a graduation speech in both Spanish and English, and a local judge was heard to comment that it was a “disgrace to let it happen.”

Padilla worked as an investigator for the Monterey County Public Defender’s office. While on the job, Padilla was known to take in families he found without shelter at the courthouse, and he received phone calls at all hours of the day.

Even after retirement, he continued to intervene in cases in which he believed defendants were getting a raw deal. And he investigated and pursue complaints against local law enforcement.

Padilla was born in Mexico City on April 29, 1935, and moved to the United States with his parents and siblings in the mid-1950s. The family worked as migrant workers in Texas, Tennessee and Arizona. “It was almost like the Grapes of Wrath,” said Cosme Padilla. They landed in North Monterey County in 1958, when the Padillas started sharecropping for Driscoll’s.

Cosme Padilla said his older brother, who was known familiarly as Chris, got interested in civil-rights issues in the late 1960s when he was introduced to LULAC. While he had been involved in other LULAC councils, the incident at the middle school sparked his determination to found a local chapter.

“It really was his passion, working with the community and trying to make things better,” Cosme said. “He did it because he believed it in his heart.”

His activist spirit spread among his siblings. His brother, Gilbert, was a Salinas firefighter who sued the city for discrimination in the 1970s. Cosme Padilla is a county planning commissioner, and his surviving children, two sons and two daughters, are active in the community.

“Everything that all of us have done in this community, what we are in the community, it all comes from Chris,” said Cosme Padilla.

Five years ago, a statue of Blind Justice was dedicated in Padilla’s honor at the National Steinbeck Center. It now stands at the César Chávez Library in Salinas.

In addition to his children, Crecencio is survived by his wife, Mercedes, two sisters, four brothers, several grandchildren and dozens of nieces and nephews.