May 3, 2015 Jogging through Toro Park on the Marks Canyon trail, Peter Kwiek encounters four men with picks, shovels, machetes, a gas can and what appeared to be a chainsaw. They were widening an animal trail for use as a mountain bike trail. They said they also had completed a bike trail parallel to the Harper Canyon trail. 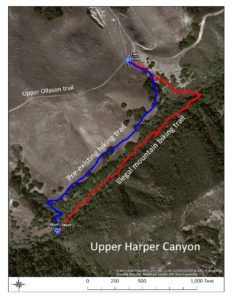 Oct. 1, 2015 Kwiek provides Parks Commission with photos and maps of Marks Canyon trail in what had been a relatively pristine canyon and wildlife corridor.

Commissioner Joe Hertlein asks if there is any way to stop the activity. Then-county Parks Director Mark Mariscal says “park staff has tried to go out to the site to enforce this action and anyone seen with tools is questioned.” Says he is unsure what code sections apply.

Nov. 8, 2015 Mariscal sends memo to Parks Commission regarding “Expansion of bike riding on trails including the possibility of charging an annual fee for bike riders within Toro Park.” It says, “One approach might be … expanding the ability of bike riders to go on trails that currently are off limits … . There are already bike riders utilizing unauthorized trails and enforcement has been challenging.”

Mariscal recommends that staff hold at least two community meetings “to discuss the expansion of bike riding within Toro Park” and report back by spring.

Nov. 13, 2015 In letter to Mariscal, Kwiek says he had hiked into Marks Canyon to see how the rains were affecting the trail.

“Conditions in the upper watershed have so deteriorated after a couple of moderate early season rains that I would recommend that the county immediately close Marks Canyon to all recreation until after the rainy season.” Says he saw a new trail branching from the Marks trail and significant landscape removal. He notes that the Big Sur Land Trust, which donated the Marks property to the county, has recommended that a “plan for Marks Canyon’s protection, restoration and future usage be adopted as soon as possible to prevent exacerbation of recent and ongoing watershed degradation.”

Dec. 3, 2015 Parks commissioner Ada Winder says the county should explore annual bike passes and a solution to illegal entrance into the park.

Dec. 7, 2015 At meeting of the Monterey Peninsula Regional Park District board, board member and mountain biker Ken Chrisman “urged the board to encourage staff to consider the recreational needs of the mountain bike community … .”

Upper Black Mountain: chaparral being removed, a quarter mile of Manzanita and Canothus, though the trail is off limits to bikes.

Marks Canyon: A mile of unauthorized trail building, damage to native trees, 6-foot gouges, removal of boulders. Hiking only rule is not enforced.

Jan. 7, 2016 Kwiek letter to county compliance officer: “I believe that the continued lack of official action or even public messaging on the part of the county is promulgating an understanding that the mountain biking community is free to do whatever it wants on public land without review or oversight, regardless of the damaging impacts.

Feb. 1, 2016 Monterey Off Road Cycling Association meeting notice says, “A concerned hiker is blaming mountain bikes for trail damage though the rogue trail builder may not be a biker at all. David Tucker of the Highway 68 Hillbillies summarized their many years of sanctioned work with county ranger oversight, permission and use of tools. He will make a presentation at the meeting and point out trail damage by hikers as well.”

Feb. 4, 2016 Monterey Herald article reports that mountain bikers told park commissioners “that they have as much right to use the trails as anyone else” and that the “illegal trails” could be the work of a “single rogue individual.”

Article says Mariscal had tried closing the trails because of wet weather, had posted signs and might consider a sting operation if it has the resources.

Monterey Off Road Cycling Association President Joel Trice acknowledges the trails had not been built sustainably and should be upgraded.   David Tucker “said he had donated thousands of hours over the years to creating many of the trails with the permission of previous county park rangers, including a trail called Pipeline that he called a model for sustainability.”

March 5, 2016 Another Herald article says the trail system “is praised by mountain bikers who call it a technically challenging ‘world-class’ destination on par with internationally known biking spots and nature-loving hikers who revel in the diversity of its natural habitat. It is on those trails where a thriving mountain bike community is facing off with naturalists over how the trail system should be used after a hiker and licensed geologist documented what he dubbed ‘illegal’ trail work and ‘environmental vandalism’ … .”

“(T)here has been unrestricted use on Toro Park trails,” says Mariscal. “The question is what to do about it.” Says he has launched a planning effort to develop sustainable trails for hikers, bikers and equestrians. Creates a 13-person committee representing stakeholders to hold public meetings. Committee is made up of two hikers, two runners, an adjacent property owner and eight mountain bikers.

March 21, 2016 At the first committee meeting, bikers say they have devoted countless hours of volunteer work to creating, maintaining and improving trails for decades, with permission from park representatives..

Professional cyclist Keith DeFiebre and competitor John Pattullo say they have been riding in Toro for decades with permission of former rangers. Pattullo says it is not a nature preserve. DeFiebre says, “It’s evolved from a rustic rural park to a more heavily used area for recreation.”

Mariscal says county park volunteers do most of the trail work, most of which was blessed by former rangers.

April 2016 In response to a public records request by Edwin Norris, Parks Department says it has no records pertaining to trail-related work in the park between 2000 and 2016.

April 29, 2016 Toro Park Trails Working Group status report says some trails not designated for bike use can be opened to bikes for special events.

“Some trail users have taken it upon themselves to do the deferred work on their own without Parks Department awareness or approval” writes county staffer John Akeman. “The parks department plans to establish a process of for granting permission to authorize (or deny) the work.”

July 2016 Soberanes Fire breaks out near Big Sur and eventually spreads to tens of thousands of acres and burns for three months. Toro Park is closed to the public for use as a base camp for fire-fighting crews. Trail-planning work is put on hold indefinitely because of the fire and, later, by heavy winter rain.

Feb. 14, 2016 Kwiek writes county officials: “Hiking alone in Toro Park on Sunday, February 12, I encountered four mountain bikers riding fat tire bikes in Harper Canyon. Upon recognizing me, one of them began threatening to physically assault me and demanded that I delete photos from the camera I was carrying. Fearing for my safety, I felt I had no choice but to comply and delete my photos as the enraged biker hovered over me and worked to whip the others into a similar frenzy. The apparent leader warned me to ‘stop harassing mountain bikers’ or ‘suffer the consquences.’”

September 2017 Monterey County Supervisor Mary Adams says she will press the county to take control of the situation at Toro.