Playwright Josefina López wrote “Real Women Have Curves” in 1992, channeling her inner sage when she was 19. Ten years later, the movie starring America Ferrera took the U.S. by storm by receiving the audience award for best dramatic film and the special jury prize for acting in the 2002 Sundance Film Festival.

The movie has become a classic of women’s empowerment, and heralded a new era in cinema in which more curvy women were cast on the big screen. 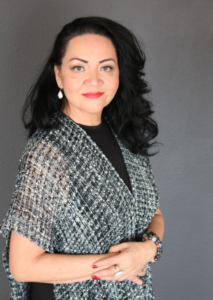 Much happened to López since her iconic play made it to the big screen. Her small theater in Boyle Heights took off, she moved to France, got married, earned a “Diplome de Cuisine” from Le Cordon Bleu in Paris,  wrote more plays and produced others.

On Saturday, March 12, she will be honored by the Watsonville Film Festival to commemorate the 20-year anniversary of “Real Women.” The celebration will take place at 6 p.m. at the Mello Center, 250 E. Beach St., Watsonville.

López is a great conversationalist and spoke with Voices co-founder Claudia Meléndez Salinas about a wide range of topics, which included life after “Real Women,” her playhouse in Boyle Heights, Casa 0101, why Latino stereotypes in Hollywood endure, and the advice she gives to other Latino writers. The interview has been edited for clarity and length.

Voices of Monterey Bay: How did your life change after the movie came out?

Josefina López: After the movie was a huge hit, I thought, oh, wow, my career’s gonna take off. And it didn’t. I had other deals and nothing happened. I had another movie deal with HBO that really didn’t get made. It hasn’t been consistent.

Last September, it’s been good because I’ve been in what’s called a “mini room,” which is a TV show that hasn’t received a green light yet. But it’s a show that might get made. So I’ve been getting paid consistently. I would say my whole career has been consistent. It hasn’t been like, oh, wow, big bucks. I’ve just been crazy enough to pursue my passion.

I’m sure you’re sick and tired of all the narco shows, because that’s all there is, that’s all it gets made, narcos and bikers who sell drugs. It’s sad because I understand why; you know, (producers) need to do that because they need conflict. But then … that’s all that gets made. I’ve tried getting other shows made, including trying to get “Real Women Have Curves,” the TV show, and I still haven’t done that, so hopefully things will change but it’s still ridiculously bad for Latinos and women of color.

VOMB: Have things changed in Hollywood since the movie came out?

JL: One of the few things that changed is that now there’s more body positivity. There are some (large-size) characters or chunky girls who are sexual who are fun. Having America Ferrera play one on Real Women and having it be a breakout movie for her, that helped create more roles for normal-size women. I would say there’s more body positivity for normal and heavyset women 20 years later as a result of the movie. So I would like to take some credit for that.

VOMB: Tell me about your theater. Why did you start that?

JL: It was just me and a couple friends and I rented a retail space. I didn’t know how to run a theater. I just kind of did it de panzazo. But luckily, when the movie won awards, that’s when a lot of people found out about me and that’s when the theater really took off because then I decided to do the play version.

One of the things that happens is that, when you write a screenplay, the actors and the directors always get the credit, but the writer rarely gets the credit, so I felt like I wanted to do the play to remind people that I wrote the story. I co-wrote the screenplay and it’s based on my life and I love the director and she’s great but why did she get all the credit? And also America got so much credit. I was at Sundance, and nobody wanted to interview me or take my photo.

VOMB: What other plays have you staged at Casa 0101?

JL: One was called “Trio Los Machos” and it is about three men who are in their 80s, but they met in the Bracero Program. They started a guitar trio and when the Bracero Program ended, they decided to stay and they were undocumented, and then they continue playing.

They’re always fighting and they hire a young woman in order to revamp themselves, but then one of them has a fling with the young girl, and the other guys can’t believe it. They end up punching the guy who’s always in the middle. And then he has a stroke and they’re gonna have to take care of him. They’re gonna have to change his diapers, become his nurse.

And these two men, machos who are always fighting, have to basically become mom and dad and take care of this big man. Then they find out that, if they can prove they were braceros, they will get money reimbursed to them because money was taken away from them from their paychecks, supposedly for Social Security. And so they’re looking throughout the whole house, and as they look through the house for the documents, hoping that he has them somewhere.

They find photographs and  scrapbooks that the guy had of all their concerts and then they start to realize why they’re always fighting, and it was because they were in love with the same woman. There were a lot of wounds that they weren’t willing to talk about as men, as grown ups.

They also discover that their friend was gay, but they never bothered to think or ask because he was going to become a priest, so they just assumed he wasn’t a mujeriego.  And when they realize that, oh my God, this guy was gay all along and he was their buddy for 50 years, and they realize how if they had known he was gay, they would have kicked his ass and they would have broken up and they had to kind of look within and realize what machos they are and why they’re so afraid of dying. It’s also looking at the wounds of being a bracero.

This play was so successful, we’ve done it like three or four times at my theater. It was so wonderful because a lot of families came and brought their fathers or grandfathers to see this play and there was a scene where the braceros would get naked and they would cover their private parts with their contracts, like in that famous photo, and they would sing a song that I co-wrote called “El Corrido del Bracero”: “Somos más que brazos, somos corazón.”

It’s a very beautiful song about how they have a heart and how they sing because they can’t cry. As men, they are not allowed to cry. So they sing songs. It’s a beautiful play. I’m very proud of it, and that was very, very successful.

VOMB: What inspired you to write “Trio Los Machos”?

JL: My father told me his story and I realized how much he suffered, how much humiliation and pain and the physical work and the sacrifices he made. He suffered a lot. My father got deported at least six times, and he wouldn’t give up. My dad is a real cowboy … When you look at his life … most people would have given up, but my dad didn’t.

So for me, “Trio Los Machos” was a love letter to my father saying “I understand.” I understand and I realize how my dad had to shut down a lot of his feelings. Because that was the only way he could survive, going through what he did because if he had to honor his feelings and really be in touch, he just wouldn’t be able to do anything.

VOMB: What advice do you have for Latino and Latina writers?

JL: Well, the first thing would be to never wait to be validated by anybody. All of us are waiting to be told that we are good writers or good artists, but you never wait for anyone to do that because you have to do that for yourself.

When you say “I can write, I am a poet, I’m an artist because I say so,” that’s when you have the power, that’s when you really are being an artist. To declare yourself an artist is the job of an artist. You could be doing amazing work your whole life like Van Gogh —right? — and you’re just 100 years ahead of your time. And everyone thinks your art is crap.

| Featured photo: America Ferrara in “Real Women Have Curves” set a new standard for how women in films could look. Credit: Newmarket Films/HBO